by techforftcp
in How can How to, How to, mobile, Tech news, Whatsapp
146 7
0
486
SHARES
1.5k
VIEWS
Share on FacebookShare on Twitter

Looking at WhatsApp’s increasing popularity, the company is offering new features in us. On the other hand, WhatsApp is fast becoming a mess, spam is becoming the way. Actually, there has been a recent case of missing WhatsApp Chat for many users, which has been complained on many web portals. Bharat Mishra, a WhatsApp user has complained of missing messages, which has been shared with many social media and many portals along with WaBetaInfo.

Bharat complained, writing that from the morning he noticed that his WhatsApp chat is constantly disappearing. Bharat told that he use the Moto G4 Plus and since last morning WhatsApp’s early chats are deleted. He told that “I have re-installed the app five times, even then it did not get cured.” 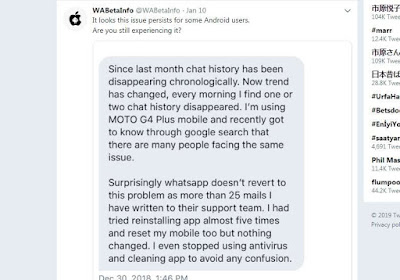 Bharat wrote that since last month my Whatsapp chat history is disappearing automatically. Now every morning, one or two chat history is deleted on my phone. I wrote on Google search about that I have faced this problem in the Moto G4 Plus phone but after searching Google, it is seen that many users complained about such a problem. Bharat says that I have mailed the team to more than 25, but there is no response from Whatsapp.

It is believed that the reason for this can not be taken back up. Whatsapp had announced in August last year that the app’s back-up will be on the drive. Also, it has been said that if it is not updated after more than a year, then the chat will be completely deleted. In such a case, Bharat may have not got more than one backing up its chat.