After 126 years, Ganesh Chaturthi will be celebrated in this way, this time the feet of Ganapati will not be able to touch, only the face will be seen. | The pandals here changed to health camps, after 126 years it will be like when Ganpati will be worshiped in the houses, not touch the feet, only the darshan will be there.

Today, Ganpati Bappa will visit, preparations for Ganesh festival have been completed. There is no lack of reverence, but due to the corona, Ganesh Chaturthi's Raunak is missing from the market. There is no enthusiasm to decorate the pandal. After 126 years, this will happen when people worship Ganpati Bappa in their homes. Earlier in 1896, when the plague spread, people worshiped Ganpati's calendar in homes.

Advocate Dahibavkar, chairman of the Brihanmumbai Public Ganeshotsava Coordination Committee, says that every year 12,000 public pandals are set up in Mumbai and 2,470 pandals are on the way. About two lakh Ganapathis sit in the houses. But this time it will not happen. 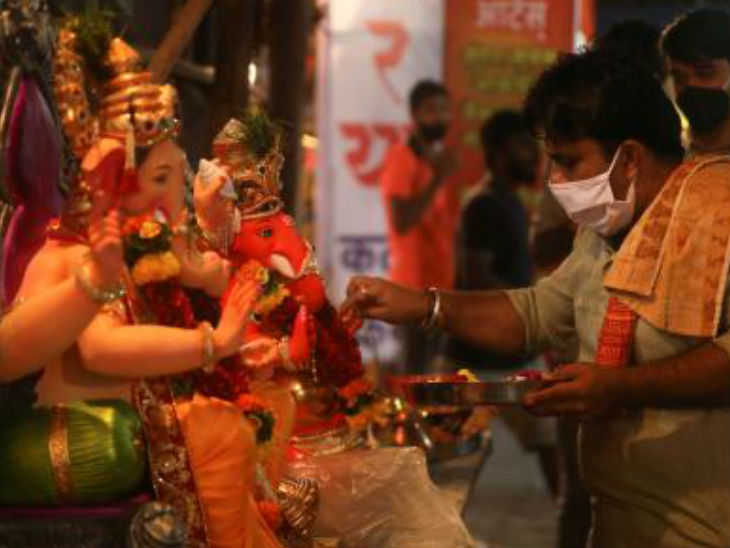 Worshiping Ganpati Bappa. The campus is less crowded due to Corona.

They say that the committee had suggested to CM Uddhav Thackeray to install a 4 feet statue of Ganesh ji, immersion in artificial pond, online darshan and medical camp, which he accepted with some changes. 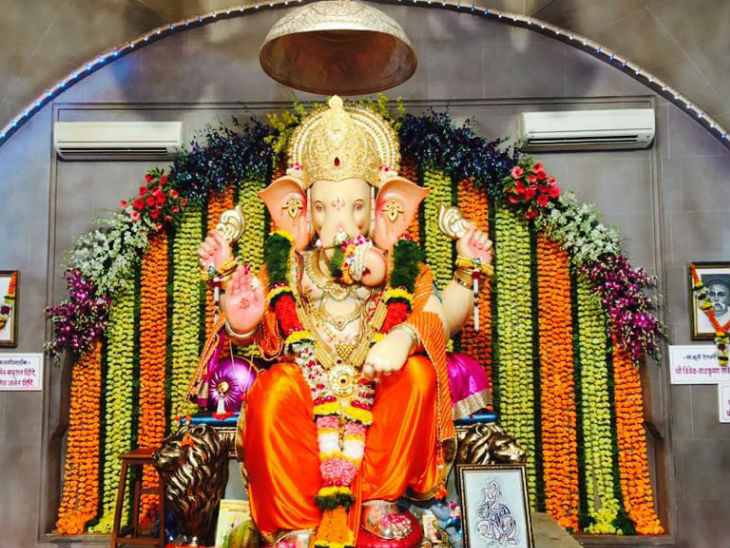 The picture is of Andheri Cha Raja Pandal of last year. Last year Ganeshotsav was celebrated here with great pomp and show.

Andheri Cha Raja: There will be immersion in artificial pond instead of Versova
Andheri Cha Raja has a special attraction in the pandals of Mumbai. Every year Bollywood celebrities come here. There is a donation book of idols here till the year 2028. This time Ganapati's feet will not be able to be touched, only darshan. Also, this time for idol immersion, an artificial pond has been built near Pandal, where idol immersion will be done. Earlier, there was idol immersion in Versova, four kilometers from Andheri, which involved around two lakh people. The journey of just four km was completed in 36 hours. 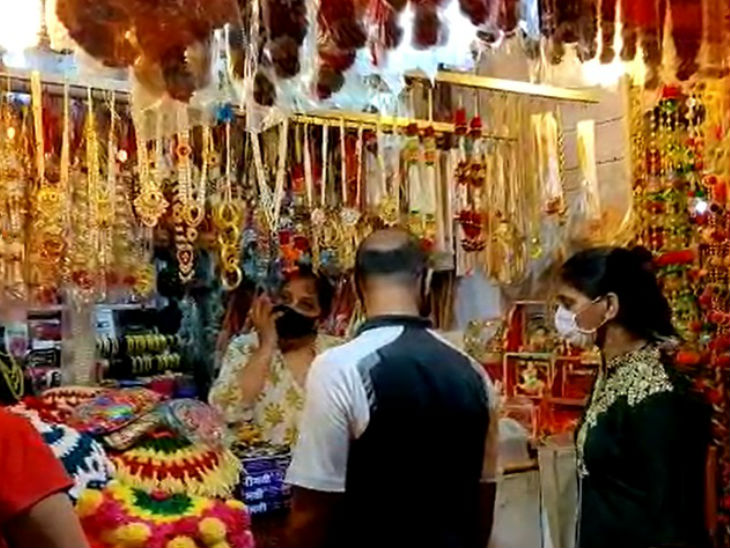 People are not less enthusiastic about Ganesh Puja, people are buying idols. This time due to Corona, worship is done in the houses.

The statue of Andheri Cha Raja will be four feet due to Corona. Last year it was 9 feet. There will be a stage made of metal instead of pandal. Blood donation camp will be set up near Pandal. Under social distancing, only one man can see at a time. The biggest change of the year has been in a trolley carrying Ganapati for immersion. Only two people will be drawn instead of 12-15. This trolley is specially made from Pune.

Evershine Mitra Mandal: ICU equipped ambulance and doctor will remain posted 24 hours
Evershine Mitra Mandal Pandal also has its own charm. It is the largest pandal in the Malad area of ​​Mumbai. Naveda Putman is a Christian who oversees this pandal. But, for the past 30 years, Ganapati festival has been organized in Malad.

He says that every year there was a huge crowd of TV artists. But, this time Ganapati will only stay for one and a half days. Only Panditji will remain on the stage. An artificial pond has been built near the pandal, where immersion will be done. 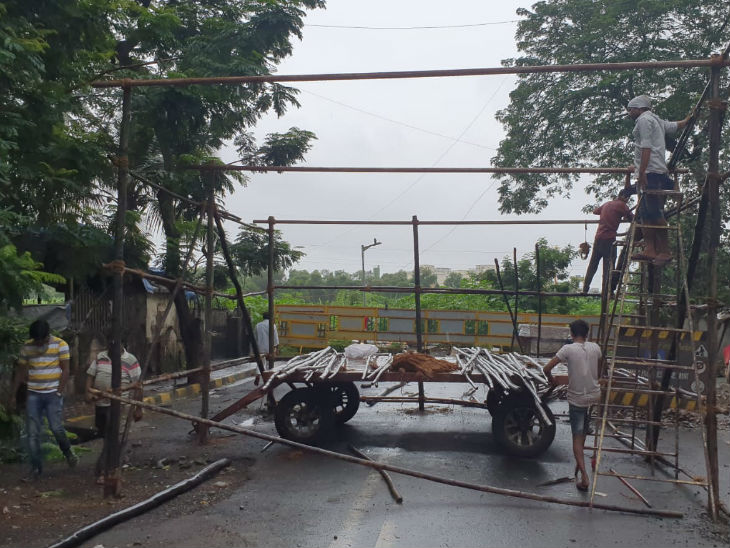 The picture is of the largest pandal being built in Malad area of ​​Mumbai, where preparations are still going on.

The pandal will have an ambulance equipped with an ICU and an MBBS doctor for 24 hours. Sanitizers and masks will be given by the pandals to the visitors. Also, arrangements have been made to sanitize the people. The devotees will be allowed to go to the pandal only after checking the temperature.

Every year 50 pandals are set up in Sion area of ​​Mumbai, but this time there will be only 20. Councilor of this area and Leader of Opposition in BMC Ravi Raja says that health camps will be set up in these 20 pandals. There will be a system of eye examination, blood donation, plasma donation, eye donation. Immersion will also be done in artificial ponds built near pandals. For this, idols of eco friendly Ganesh ji will be purchased.

Khetwadi king in Girgaum: 3 feet statue instead of 30 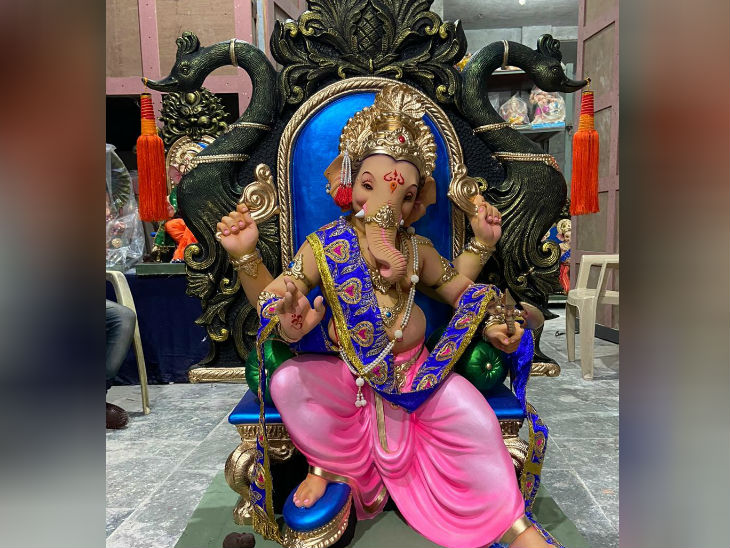 Every year 12,000 public pandals are set up in Mumbai and 2470 pandals are on the way. About two lakh Ganapathis sit in the houses. But this time it will not happen.

Ganesh pandal of Girgaon is also very famous in Mumbai. It is called the king of Khetwadi. A Ganesh idol of 25 to 30 feet is brought here every year, but this time there will be only a statue of three feet. Blood donation camps will be held on Saturdays and Sundays.

Chinchpokli Sarvajanik Ganeshotsav is one of the oldest pandals in Mumbai. “Ganesh Advent Sohla” will not be the oldest tradition of pandals this year. The grand puja to be held on the day of Ganesh Chaturthi has also been canceled. Medical equipment will be given to the needy from the donation collected by the Mandal.

King of Lalbagh: Ganeshotsav was made a health festival, 100 people donated plasma so far
The area of ​​Lalbagh, Parel and Dadar in Mumbai flourishes during Ganeshotsav. Like all times in the complex, this time a grand pandal has been built. However, the statue will be kept only 4 feet. The plasma donation camp has been running on the campus since 4 August. More than 100 people have donated plasma. 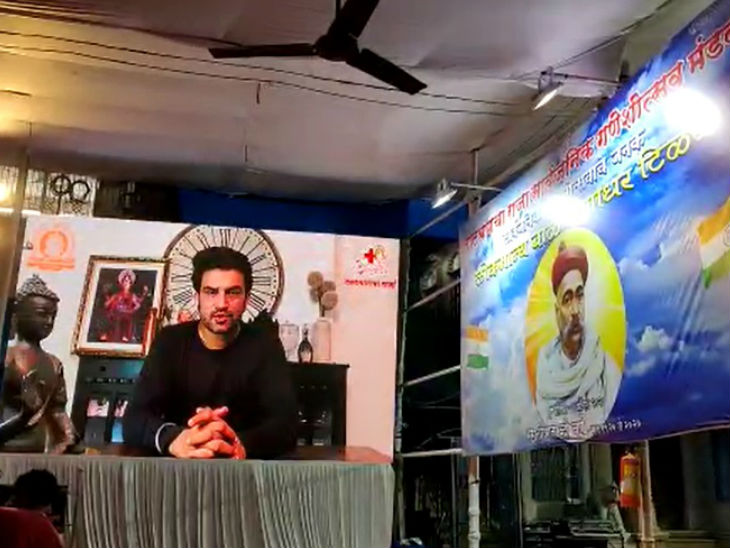 Health camps have been arranged in the pandals due to Corona. Blood donation camps have also been set up in many places.

Ganpati of Ganesh Gali is popularly known as “Raja of Mumbai”. This time, preparations are on for organizing blood donation camp here. A large statue of Lokmanya Balgangadhar Tilak, which laid the foundation for the public Ganeshotsav in the country, has been installed in the pandal here. Many of his cut-outs have also been put in place.

AYUSH will distribute decoction, sanitizer and mask in every house by cutting the cost of decoration and procession

Near Chinchpokli station, “Chintamani of Chinchpokli” has been seated for the last 100 years. This time the idol of Ganapati will not be installed, only the idol will be worshiped. Deepak Salvi, trustee of Vageshwari Sarvajanik Ganeshotsav Mandal of Parel area, states that this year is his 75th Amrit Mahotsav. Mandal had prepared a plan to celebrate this year with great pomp. However, due to Corona, Mandal is going to distribute Ayush decoction, sanitizer and mask to each house in its area by cutting the cost of their lighting, arrival and immersion procession. 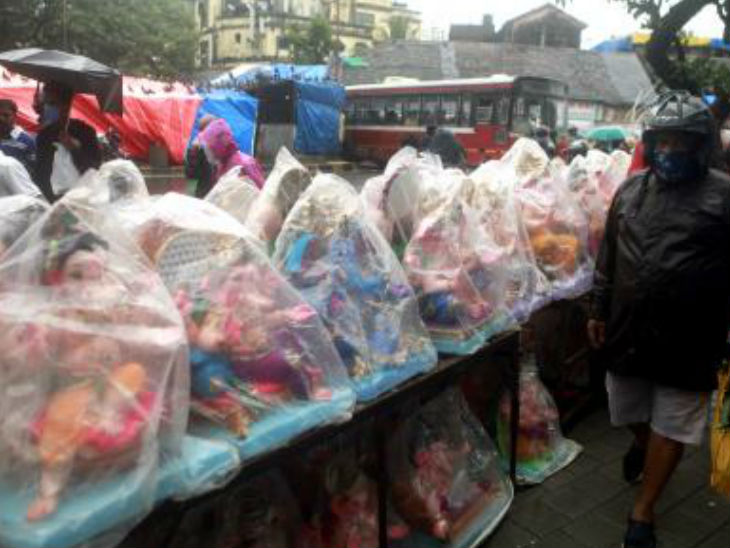 These days it is raining heavily in Mumbai. So the shopkeepers have covered the idols so that they do not get wet in the rain.

GSB of King Circle has the reputation of Ganpati as Mumbai's richest Ganapati. Every year Lord Ganesha comes here for 5 days. Due to Corona, arrangements have been made to deliver the offerings from the courier to the pilgrims who have booked the prayers.

Indian National Arrested in 21 Million Dollar H1b Visa Fraud In America – Indian citizen arrested in H-1B visa fraud case in US, may get 10 years in jail