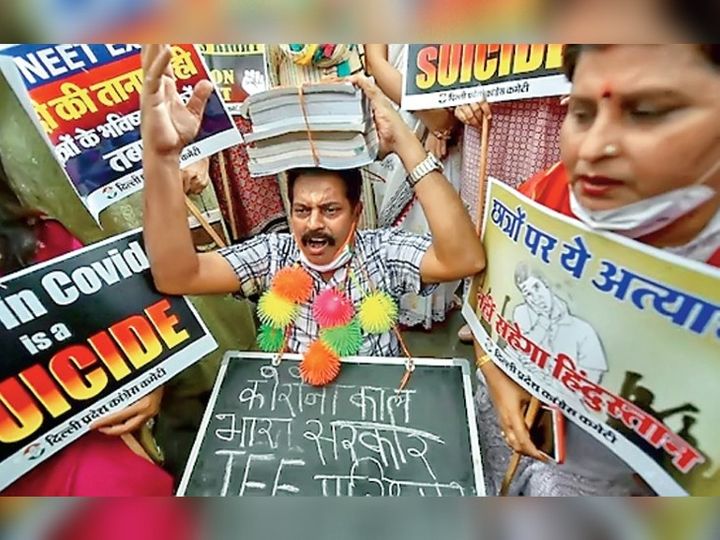 People protesting in Delhi against the conduct of NEET JEE examination.

IIT JEE, which is being held from September 1 to 6 across the country, and 6 ministers from non-BJP ruled states have moved the Supreme Court on Friday to defer the NEET exam to be held on September 13.

There are only two days left to conduct the exam. Despite this, there is still an uproar about these exams being conducted to become engineers and doctors. However, the Supreme Court has already rejected the demand to postpone the examinations. Opponents argue that at present, cases of corona infection are at the peak of the country. 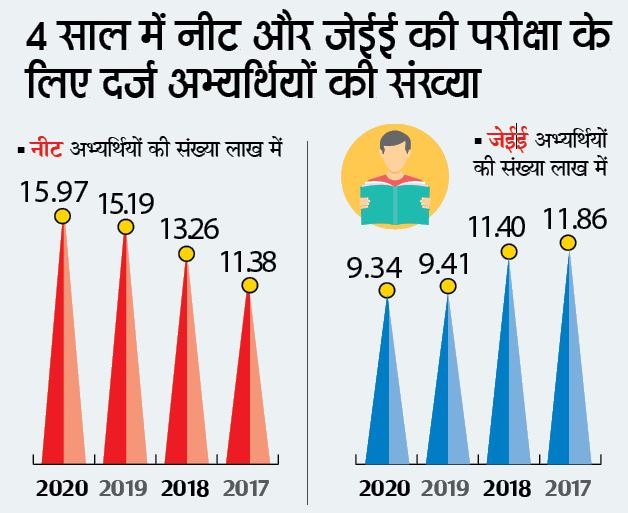 India is the third most infected nation in the world. In such a situation, there can be a huge increase in infection cases after the gathering of more than 25 lakh candidates appearing for JEE and NEET examinations. Therefore, these exams should be postponed until the circumstances become normal. At the same time, the government and academics are advocating to do it now. It is being argued that the candidates have wasted one year and affected the academic session.

The special thing is that JEE exams are being conducted in 6 shifts and NEET exams are conducted in only one shift whereas the number of candidates appearing in NEET is almost double than JEE. If you look at the NEET exam many times this exam has been conducted in two shifts.

Neet-1 and Neet-2 in 2016, the exam was conducted twice due to cyclone in Orissa in 2019 and due to late train in Bengaluru. In such a situation, many experts believe that this time too, the exam can be conducted in multiple shifts or by conducting NEET-2, the candidates can be given the option of joining the second time. By doing this, while the chances of training will be less, candidates will also get the option to appear in the exam. Let us understand this whole controversy in this report.

1. What is NEET-JEE exam controversy?

Every year two national level exams – IIT JEE and NEET – are conducted to study IIT and medical field. This year the JEE exam is to be held from September 1 to 6 and the NEET exam is on September 13. Around 10 lakh students have applied for JEE and 16 lakh students for NEET across the country, but, these examinations are taking place at a time when India has reached number three in the world in cases of corona virus infection. So far, more than 58 thousand people have died due to this virus. In such a situation, the students demand that this exam be postponed until the conditions become normal, but the government argues that doing so will spoil the youth for one year.

2. How much does it support and oppose?

3. How often do NEET exams happen twice a year?

2019: The NEET examination to be held here on 5 May 2019 was canceled due to cyclone Phani in Orissa. On May 20, the examination took place.

2019: Around 500 candidates will not appear in the NEET exam conducted on May 5 due to the Hampi Express train to Bengaluru being delayed by more than 8 hours. The examination was held again on 20 May.

4. What will be the rescue measures at the examination centers?

According to Dr. Puneet Mishra, Professor, Department of Community Medicine, AIIMS Delhi, if full care is taken, examinations can be conducted without any problem. Because now everything from air traffic to the country is slowly opening up. Examination can be conducted looking at the future of students.

As a precaution, care should be taken not to mobilize during entry, mask compulsory for candidates, adequate ventilation and hand hygiene. The most important thing is that if any symptoms appear in someone, then they should be kept away from the examination hall and made a separate arrangement.

5. Is there any other option for exams?

The IITs and the NIT examinations body NTA argue that it takes time to prepare for the exam. NTA is also responsible for many other exams including UGC NET, CIMAT, GPAT. The NTA has the responsibility of conducting an examination every month.

Talking about JEE and NEET, it takes time to coordinate with the state governments, from setting the paper, setting up the exam center, to admit card printing to ensuring the safety of the paper. If the date of these exams is extended again this time, then the hard work of the last 90 days will be wasted and it will also have an effect on getting the second exam done.

What do experts say?

Many states have circumstances of lock-down due to the Corona epidemic. Many states are also suffering from floods. In such a situation, the means of transport is also a problem. Examinations should be conducted in due course, but they should be divided into shifts so that students can join them according to their convenience.

Especially it is necessary to conduct NEET exam in shift because about 16 lakh candidates are getting involved in it. Conducted in the exam shift will reduce the congestion at the centers. Sanitization can be done. The risk of infection will be less. NEET examinations have been conducted in shifts in the past.