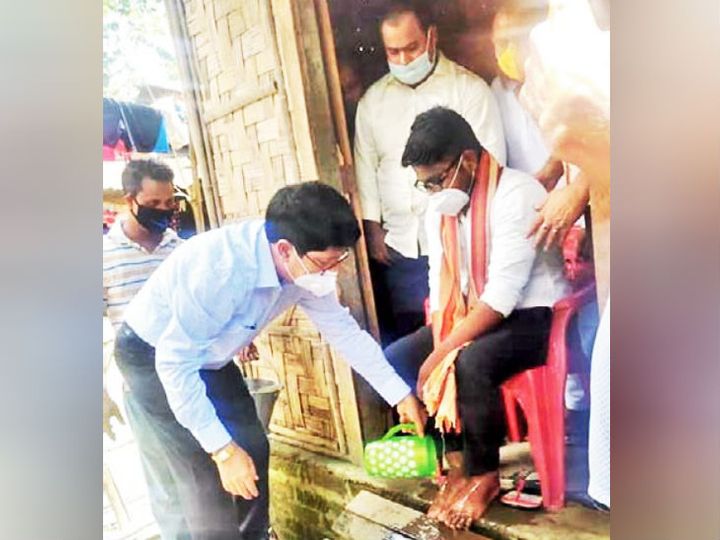 BJP MLA Aminul washing the feet of Nabidul Islam who donated the plasma.

Deputy Speaker of Assam Legislative Assembly and BJP MLA Aminul Haq Lashkar is going to his home to meet those who donated the plasma. At the same time, Donor is washing his feet and thanking him. In fact, Lashkar, the BJP's only Muslim legislator in Assam, has recently recovered completely from the Corona infection. So now they are encouraging people to donate plasma.

Recently, Lashkar reached the house of Nabidul Islam, who donated the plasma in Sonai area of ​​Kachar district. Here he honored Nabidul with a memento. After washing Nabidul's feet, he said, “I will always be indebted to you.” I managed to survive and fight Corona, because someone had agreed to donate plasma. I owe it to everyone who donates plasma. For this reason I have decided to meet him and wash him and honor him. “

He said- I was the first corona patient to recover from plasma therapy at Silchar Medical College. Now I have to encourage more and more people to donate plasma so that people's lives can be saved.

Aminul Haque said, “So far 125 people have been cured of corona infection at Silchar Medical College, but only people aged 55 to 18 can donate plasma. However, there is a lack of awareness among people about donating plasma, so I will try my best to allow more and more people to contribute to this human service. “

Plasma donor Nabidul Islam says- “I am a common man. It is impossible to imagine that a deputy speaker of an assembly would wash my feet for my small contribution. I am grateful for this wonderful effort of his. This will inspire all of us to do good work. “

Corona patients are being treated with plasma therapy in many states of the country. It is claimed that plasma is improving the health of people.