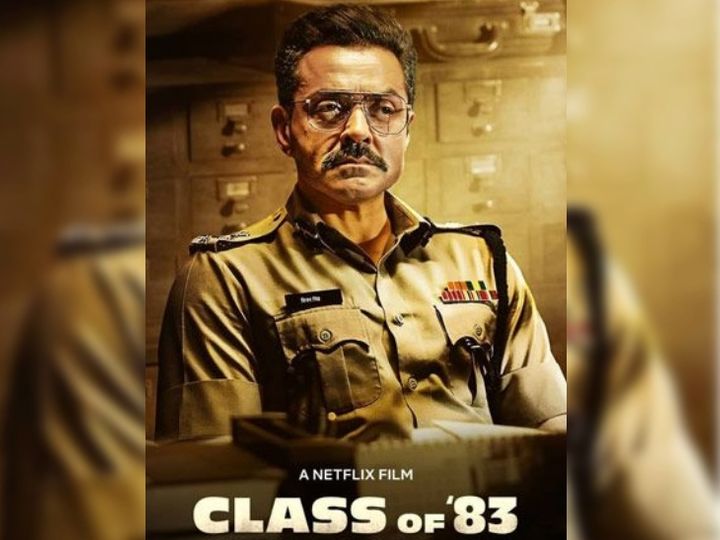 In Atul Sabharwal's Class of 83, the class of friendship, repentance, the changing nature of organized crime, the nexus of power-system criminals. It is set in Mumbai, Nashik and Dubai of the eighth decade. It is the story of a few diligent and honest policemen who have to save the city from the clutches of corrupt ministers, their own corrupt police departments and gangsters. Especially the police officer Vijay Singh, who has been given a posting posting by CM Manohar Patkar. In Nashik Police Training Center, the youth have to save their city and state from the book of law and order and the events outside the book.

Such is the story of the film

Vijay Singh from that center as Pramod Shukla (Bhupendra Jadavat), Aslam Khan (Sameer Paranjeye), Vishnu Verde (Hitesh Bhojraj), Jarnadan Surve (Prithvik Pratap), and Laxman (Ninad Mahajani), Jadhav's army of five 'Pandavas' works out. Off the record of city gangsters. The five Pandavas' friends remain intact till the training center. However, cracks start coming in the fields on the job. They start supporting the gangsters of their camp. Then the city is freed from the clutches of gangsters whether the film is about that.

The film failed to do justice to all subjects

The film is based on the book of famous crime writer Re Hussain Zaidi. Adapting it has made the story multi-faceted. But going into all the layers, the film misses a bit. The situation in Bombay then, the terrarium in Punjab, the detention of cotton mils, the forced labor of the people, from crime to many other issues remains in sync. The reason for this is the length of the film. He is very little. As a result, complete justice has not been done with all issues.

Bobby Deol handled the film with a solo lead

Nevertheless, Atul Sabharwal has made the event engaging with the fine performances of the artists. Bobby Deol is cast as a solo hero. The five Pandavas are the pride of this film. In his debut film, which has given a decent performance, it is expected after at least half a dozen films. In the training center, boys and jobs have introduced self-interest and passion in the phase.

There is a sharpen in the dialog. 'Where ammo does not work, you have to act like a termite', Vijay Singh's long dialogue, 'Every body has an immune system, government body, educational body, judicial body, all these are strong forts. Their immune system is so strict that they cannot be shaken from outside, they have to rot like a disease from inside. '

The film gives a glimpse of old Bombay

This is Atul Sabharwal's Decent gift to those who like flaky stories. The beauty of Mumbai with Black and White Era looks good to the eyes. An elegance appears throughout the film. The background score matches the mood of the film.

Delhi Violence: People were violent on the instigation of Tahir Hussain, stones were hurled on other communities

Delhi Violence: People were violent on the instigation of Tahir Hussain, stones were hurled on other communities