Final Rites of Pandit Jasraj to be held on 20th august | The mortal remains brought to Mumbai from Rasraj, New Jersey, will dissolve in Panchatattva on 20 August 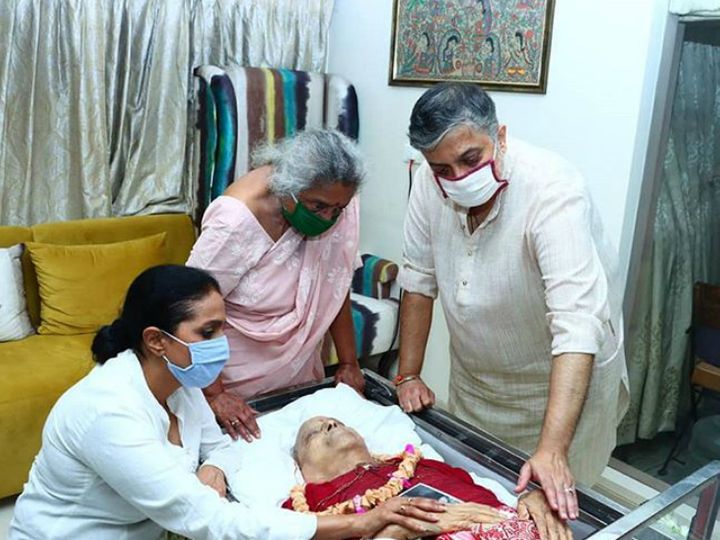 He is survived by wife Madhura Jasraj, son Sarang and daughter Durga Jasraj.

Suron Rasraj Pandit Jasraj died in New Jersey at 5.15 pm on 17 August. Panditji's body reached Mumbai on Wednesday. According to information received from the family, the funeral of Pandit Jasraj will be held on August 20 with state honors. Pandit Jasraj suffered a cardiac arrest at the age of 90. Padma Vibhushan Pandit Jasraj was in America with his family for some time.

Durga could not stop herself from seeing the lifeless body of her father. She sometimes rubbed his hands and sometimes his face. Meanwhile, hymns sung by Panditji were echoing in his house. In the family of Pandit Jasraj, son Sarang, daughter Durga, grandchildren Swara Sharma, Avni Jasraj, Mehra, Rishabh Dev Pandit and Ishwari Pandit shared some photos of his last darshan.

Born on 28 January 1930 in Hisar, Haryana, Pandit Jasraj belonged to a family that has been carrying on the tradition of classical music for 4 generations. Khayal style singing was the feature of Pandit Jasraj. His father Pandit Motiram was a musician of the Mewati Gharana.

Manipur News: Five Mla Who Resigned From Congress Joined Bjp in Delhi – Five Congress MLAs who resigned from the party joined the BJP in Manipur

India Building New Road to Ladakh to Facilitate Troop Movement without Enemy Observation – Military activities will not be seen by enemy, India is building new road for Ladakh

India Building New Road to Ladakh to Facilitate Troop Movement without Enemy Observation - Military activities will not be seen by enemy, India is building new road for Ladakh