India China Ladakh News; Political and military leaders are meet today to discuss on Ladakh | China is not backing down from Finger Area and Depsang, leading leaders and army officers of India will meet today 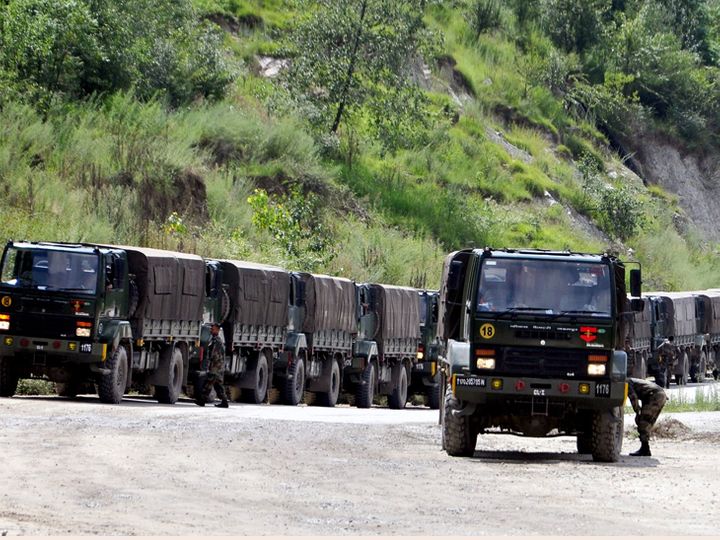 The photo is of the Kullu-Manali-Leh highway. Army vehicles carrying military supplies for troops stationed in Ladakh.

Even after several rounds of army level talks, China is not withdrawing its troops from Finger Area, Depsang and Gogra in Ladakh. There will be a meeting of the country's leading leaders and army officers today to discuss this issue. News agency ANI has given this information by quoting sources.

According to the agency, Chinese troops have been frozen in the Finger area for 3 months. Instead of retreating from the disputed area, they have started building bunkers and growing their base there.

India ready to answer China
China says that India should retreat to Daulat Beg Oldi and East Ladakh sector, but India has clearly said that it has constructed in its own region and earlier China had taken such action. On the other side of Daulat Beg Oldi sector, China has deployed long range artillery and armored vehicles. India is also preparing to respond to any Chinese action.

According to the news agency, Defense Minister Rajnath Singh had said recently that China has been showing aggression on the Line of Actual Control (LAC) from April-May. It has also infiltrated the Indian border from Kungrang Nala, Galvan Valley and other areas.

After the disengagement of the first phase, China again stubbornly
On June 15, 20 Indian soldiers were killed in a clash between India and China in Galvan Valley. China also had about 35 soldiers killed, but it never accepted. In a conversation with National Security Advisor (NSA) Ajit Doval after Galvan's clash, China agreed that it would withdraw from the disputed areas. Disengagement of the first phase was also completed, but in many areas China is again adopting a stubborn attitude.

China is not ready to withdraw from the finger area. He says he will monitor around Finger-5 through 30 soldiers. India clearly says that China will have to completely withdraw from all the disputed points.