Indian Air Force (IAF) chopper today rescued a man at Khutaghat Dam near Bilaspur in Chhattisgarh | In Bilaspur, the Air Force rescued the young man by helicopter; Came to bathe in the dam, stuck in a strong current 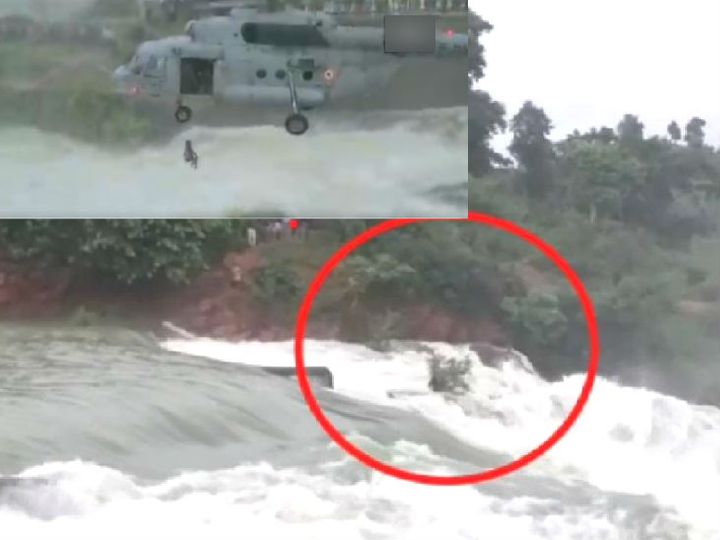 In Bilaspur on Sunday, a young man got trapped in a strong current of water. He relied on a small tree. The army resumed on Monday morning.

The Indian Air Force rescued a youth on Monday in a chopper near Bilaspur in Chhattisgarh. The young man had gone to bathe in the Westwear of Kuntaghat Dam, when suddenly he was trapped by a strong current. On behalf of the RAF, help was sought from the Airforce.

IG Deepanshu Kabra of Bilaspur range told that the youth of Ratanpur had been relying on a small tree since Sunday. A crowd of people gathered around. Police became active after the darkness. The rescue team reached the spot from Bilaspur at night. The young man was not able to see properly due to the darkness. SP Prashant Aggarwal said that the rescue team was on the spot since Sunday evening. But the flow was very fast. Due to this, there was a problem in the rescue. Where the young man is from and with whom he came there is not known.

Location sent to army, morning rescue
Earlier, the young man sitting on the tree was pleading for rescue from the signal. Police along with other people were present there overnight. According to SP Prashant Agarwal, the team of SECL and NTPC has been sent to save the young man. Airforce officials had also sought help in this regard. Location was sent to him. This was followed by a rescue operation.

Jammu and Kashmir News, Ied Planted By Terrorist Under Bridge Near Tujan Village In Pulwama

Jammu and Kashmir News, Ied Planted By Terrorist Under Bridge Near Tujan Village In Pulwama