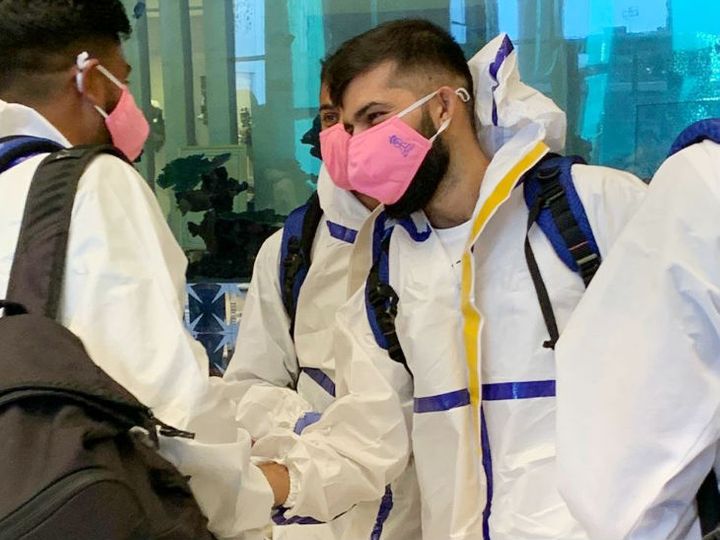 Kings XI Punjab and Rajasthan Royals for the Indian Premier League (IPL) have left for UAE on Thursday. Rajasthan players have left wearing PPE kits. At the same time, the players of Punjab, the first team to go to UAE, are wearing masks and gloves. Now Chennai Super Kings (CSK) and Mumbai Indians team will leave on Friday.

This time due to Corona, the IPL will be in the UAE from 19 September to 10 November. The Board of Control for Cricket in India (BCCI) has approved all the franchises to leave for UAE after 20 August.

Jaydev will captain Rajasthan in absence of Smith
Due to Australia and England series, Rajasthan team captain Steve Smith, Ben Stokes, Jos Buttler and Joffra Archer will not be able to play the tournament for 10 days of the beginning. In the absence of Smith, Jaydev Unadkat will lead the team. Jaydev won the Ranji Trophy title by the Saurashtra team this year under his captaincy.

Shami and Punjab team shared photos
At the same time, Punjab fast bowler Mohammed Shami shared the photo on Instagram. All the players are seen sitting in the chartered flight. All are wearing masks and gloves for protection. The Punjab franchise shared the photo, writing, “Apne Munde Lion of the Dubai.” All officials and players will be in Quarantine after reaching Dubai. “

CSK team will leave on Friday, Harbhajan will not go
Chennai Super Kings (CSK) team headed by Mahendra Singh Dhoni will leave for UAE on Friday. According to cricket website Cricinfo's report, Harbhajan will not accompany the team. They will be able to reach Dubai after a week or 10 days. At the same time, all-rounder Ravindra Jadeja, who could not attend the training camp in Chennai due to personal reasons, will leave for Dubai along with the team.

Apart from Harbhajan, South Africa's Faf du Plessis and Lungi Engidi will reach Dubai in early September. At the same time, Imran Tahir, Mitchell Santner and Dwayne Bravo are currently playing in the Caribbean Premier League (CPL), so these players will join the team later.

7 days quarantine stay in UAE
Players and support staff in the UAE will have to remain quarantined for 7 days before joining the training. During this time no one will be able to meet each other in the hotel. During this, everyone will have corona test on the first, third and sixth days. Only after three negative reports come, they will be able to enter and train in a bio-secure environment. The players and staff will have a corona test every 5th day of the tournament.