Sushant Singh Rajput Case CBI Probe | Why Is Shiv Sena Party And Uddhav Thackeray Maharashtra Government Afraid And Scared Of CBI | Why is Shiv Sena afraid of CBI investigation in Sushant case? Is there any fear of going to the government in Maharashtra? 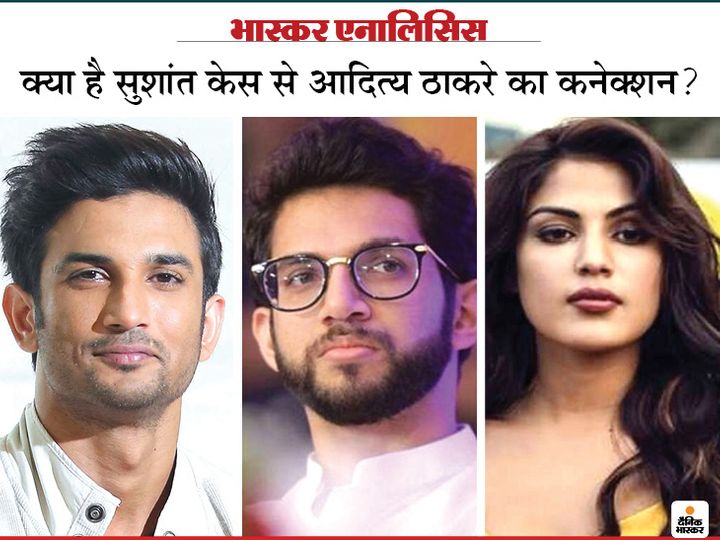 The case of Sushant Singh Rajput's death has put the Shiv Sena in trouble. The way the Shiv Sena reacted to the decision of the Supreme Court, many questions are arising from it that if everyone is happy with the CBI investigation then what is the problem of the ruling party of Maharashtra. Well, political fanfare has begun in Maharashtra over Sushant's alleged suicide, it is certain.

Some people are linking the questioning of the ability of the Marathi manoos, ie Mumbai Police, with the Shiv Sena's fury. Whereas, the thing is more than this. Many stories about Sushant's death came on social media and the most talked about is the deep connection between the suicide of his former manager Disha Salian, son of Maharashtra Chief Minister Uddhav Thackeray and state minister Aditya Thackeray.

Senior journalist Chandrakant Shinde, who has been covering Shiv Sena's politics in Mumbai for 25 years, says that everyone knows Aditya Thackeray's film connection. This is not a new thing. He has been a part of film parties in the past. Many stars in Bollywood are his friends. Earlier, Aditya's name was also associated with a Bollywood actress.

It is clear that Aditya has his own circle and also has film stars. Some of the facts on the story published on social media, a portal published on Interviews.net, have also proved to be true. In this, the connection of Aditya Thackeray is firmly established. Riya Chakraborty's conversation with Mahesh Bhatt was also first made public on this portal before Sushant left home. Now viral posts are proving it right.

Another story is also going on that some documents related to Disha Salian case have been lost from the police station. No one is convinced on the pretexts of Mumbai Police and fingers are raising on him. Clearly, this would not have happened without any political pressure.

Now that the investigation has already come to the hands of the CBI, the truth of this story will also be revealed soon, it is expected. But, the question is what is happening in the politics of Maharashtra? Actually, Shiv Sena has been given a stand by the ruling parties NCP and Congress in power on this issue. The Congress and NCP did not show as much vigor as the Shiv Sena flagged Maharashtra's pride on the Supreme Court's decision.

Parth Pawar, grandson of NCP Chief Sharad Pawar and son of Deputy Chief Minister Ajit Pawar, was seen standing with the opposition in the matter. First he demanded a CBI inquiry, then when the Supreme Court verdict came, he wrote and tweeted 'Satyamev Jayate'. BJP leader Narayan Rane and his son Nitesh Rane have accused Aditya Thackeray of pressurizing the Mumbai Police in this case. Rane about Junior Thackeray #BabyPenguinresign Started hashtag and it became viral on Twitter.

The story of Divya Marathi state editor Sanjay Avate is not going to stop here. In this case, the BJP is going to benefit the most. Suppose the CBI does not see any role of Aditya Thackeray, but if he is called for questioning, the Shiv Sena will be deterred. Then two possibilities will be formed. First, allied parties may also pressurize Aditya and Uddhav to resign. In such a situation, there will be an opportunity to force the BJP to come together by putting pressure on the Shiv Sena. Second, NCP can leave Shiv Sena and go with BJP. Ajit Pawar has already done this and has formed a government with Devendra Fadnavis at midnight.

What Mumbai reporters are saying is what Amte is saying. The reason is that even after nine months of forming the government in Maharashtra, the Shiv Sena, NCP and Congress governments have not been stable. There is no coordination between the three. That is why political appointments to be held in corporates are still in the balance. Not only this, the case of appointment of 12 nominated MLAs in the Legislature has also not progressed further. The government has not been able to finalize the name yet. Importantly, many Shiv Sena workers are also not happy in their government. But, nothing can be said.