Vaishno Devi Yatra 2020: Ground report from katra vaishno devi | Where the journey of Vaishno Devi is to begin from tomorrow, the town is deserted, tea-breakfast shops are also closed; Corona test cannot be admitted without Katra

The journey of Vaishno Devi starts tomorrow from August 16 after being closed for about 178 days (6 months to 2 days ago). Bhaskar reporter Akshay Bajpayee will accompany the first batch. They will tell you how the journey has changed due to Corona this time, if you want to go, how to go and what precautions should be taken, they will keep you updated with all these information. Read this live report ..

As such, Jammu and Kashmir has been unlocked. Shops in Jammu are also open and the market is open but Katra is still locked even after unlocked. When I reached Jammu airport at 2.30 pm on Friday afternoon, all the passengers were put in line. The lines of passengers coming from different planes were different. Corona test was being done for every passenger who came from outside. The test process was just one to two minutes, but the queues of passengers were looking long for this.

Asked the airport staff doing the test, which test is this? So said, it's a rapid test. The report will be on your phone in half an hour. We were ahead in the line, so we were free at three o'clock. Those who were behind may have been able to leave the airport after two hours. 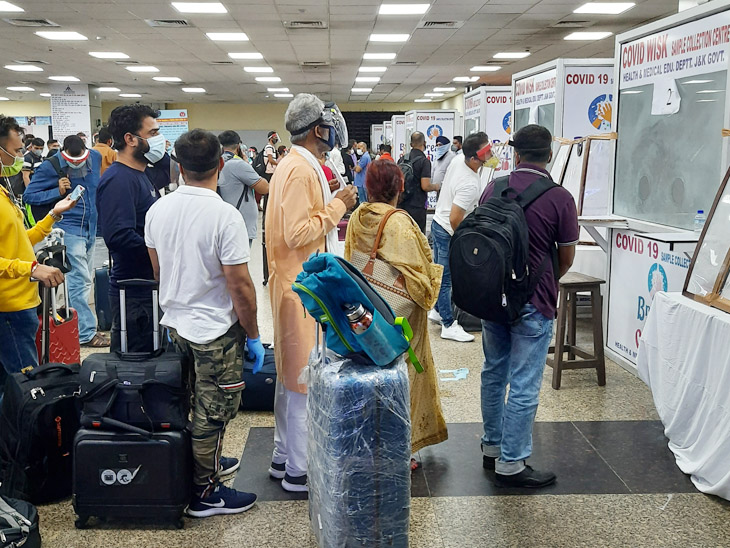 Passengers standing in line to get the corona test done at Jammu airport. It is permissible to enter Katra only after the corona investigation.

Well, after getting the test done, I took a taxi from Jammu airport to Katra. No checking was done in Jammu. Our car was then stopped at the Muri check post. Along with the police, the administration officials were seated at the check post, who were noting the details of every movement. Local people were being allowed to come and go after seeing the identity card, but the corona investigation report was mandatory for those who came from outside, that too should be the latest report.

I told them that, screening has been done at the airport and investigation has also been done. They have asked to send the report over the phone in half an hour. On this, the officer said that you should wait outside for hours. Cannot enter Katra limit without test report. We waited for about an hour at the check post. The airport also received a report on the message which was negative, but even after seeing the report, the authorities refused to enter. He said that those coming from outside would have to go to Quarantine.

Even after the report comes, you will quarantine those coming from outside, then how will the journey of Maa Vaishnodevi? The officer had no answer to this question. The mother's journey is going to start from August 16. Everyday 2 thousand devotees will be able to see. 1900 will be in the state of Jammu and Kashmir. Only 100 devotees can be from other states. Well, after talking to ADM, we were given permission to go inside after reading and writing. Just after reaching the border of Katra, there was a completely changed weather from Jammu. It is not raining here but there is moisture in the weather due to the hill. Neither sun is heating nor is it humid. 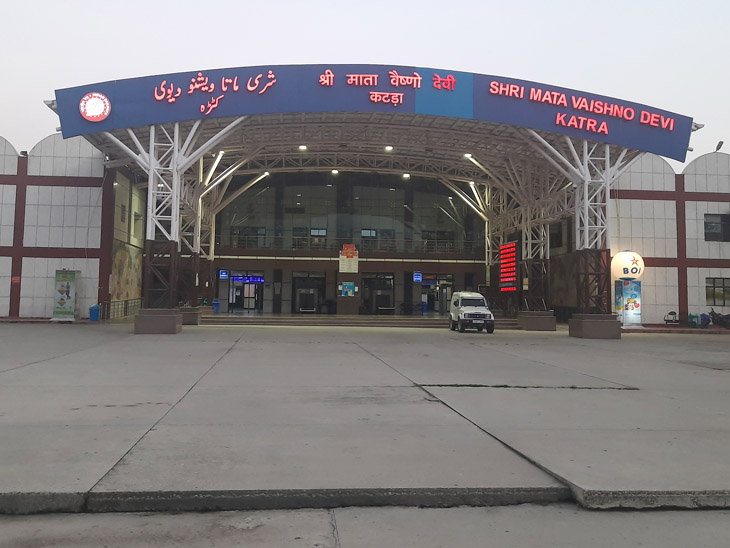 This is the railway station of Katra, which is completely deserted. No trains are coming here right now.

Arriving in Katra, I saw that everything was closed. Hotels, restaurants, tea-water shops were all closed. There was no sight on the road either. I was with Sushil Sharma, a fellow from Katra. They operate hotels here. He told that in Jammu, the lockdown has been removed from the first week of July but everything is closed in Katra. The special thing is that this was not done by the closed administration but the people themselves did not open anything. Why so? Asked on this, Katra depends on the entire passengers.

Spread over 2 km, there will be ten thousand people living outside this town. 90% of the people make pulses and roti only from the passengers coming from outside. Now since March 18, passengers are not coming, then everything is closed since then. He said, I turned 40 years old. Seeing this for the first time in my life. Do not know why Mata Rani got angry. Then he said to me, where will you stay? Everything is closed here and even if there is a stay, where will you eat? Even if someone gives a room, the kitchen is closed to all the hotels. I said, will stay at your hotel. And we went out with the food system. However, at night we enjoyed a delicious lunch of tiffin from Sharma ji's house. 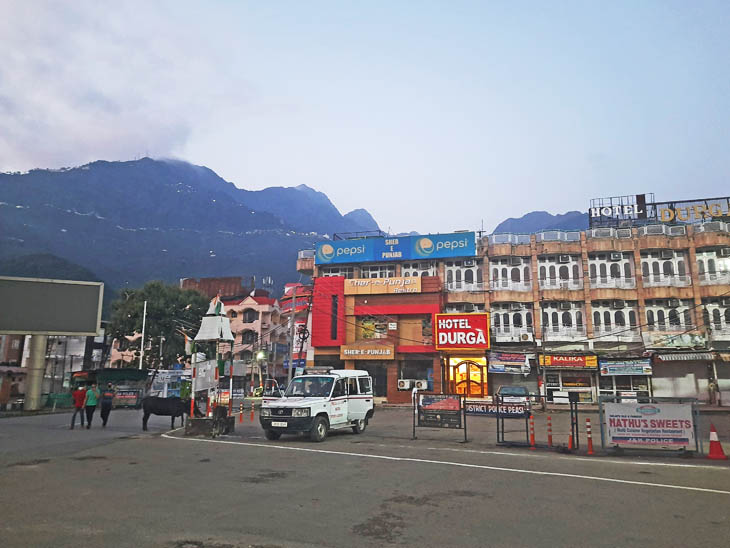 This is the view of Katra's Fountain Chowk. This is the main square of the city, earlier there used to be a chahal initiative, but everything is closed now.

In the evening we wandered and reached the Fountain Chowk of Katra. This is the square, where there was a crowd around the clock. There was no place to set foot but now the circumstances are such that everything is deserted here. Horses and mules carrying mata's court are sitting here. Dry fruits shop operator Ajay Upadhyay, who is walking at the crossroads, said, our entire business is dependent on the tourist. That is why Katra is unlocked, but the shops are all closed because the tourists are not coming. What is the use of opening shops in such a situation?

Lockdown was started from 18 March itself. The first week of July also opened but the market is still completely closed. Vishal Kapoor, who has been operating the hotel at Fountain Chowk for years, was found outside the hotel. They said, we have opened the hotel but if someone comes. Did not turn on the kitchen because Labor had not returned yet. The administration has given permission to 100 outside travelers. Now what will happen to so many travelers? We are waiting for full movement to open. Vishal says, this season used to be most crowded in Vaishnodevi as it was summer vacation. Due to the coronavirus, everything became deserted. 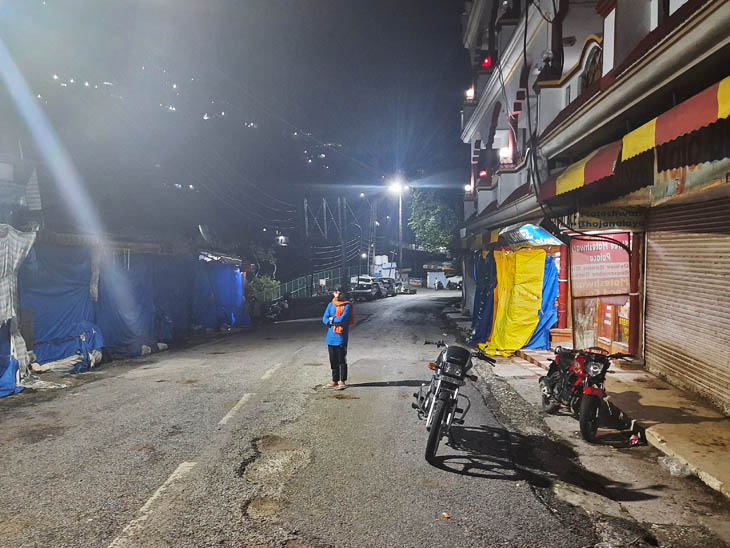 There was never even a place to set foot on the Banganga route, but due to the corona, no one is visible here, shops are also closed.

Registration will be done online, every passenger will be scanned

There is a Darshani gate on the Banganga route from where the journey begins. The administration says that tents will be installed here for medical checkup. There will be thermal scanning of incoming passengers, cold-fever checks and sanitized them. Only then the journey will proceed. Also during the journey, passengers will be sanitized in between. Those who come from outside will see the corona report, only then they will be allowed to travel. The journey is to start from Sunday but the medical checkup tent is not visible till Saturday afternoon. Things are not clear about the passengers who will come from outside, where they will get the corona test done. When asked, officials of the Shrine Board are refusing to speak anything.

The lockdown remains in most districts of Jammu on Saturday and Sunday, so it is expected that fewer people will come to visit tomorrow, especially the locals. Off the record, some officials also say that the journey may be delayed or the bus starts for formalities and stopped a few days later. Overall, the atmosphere is still cold regarding the journey. 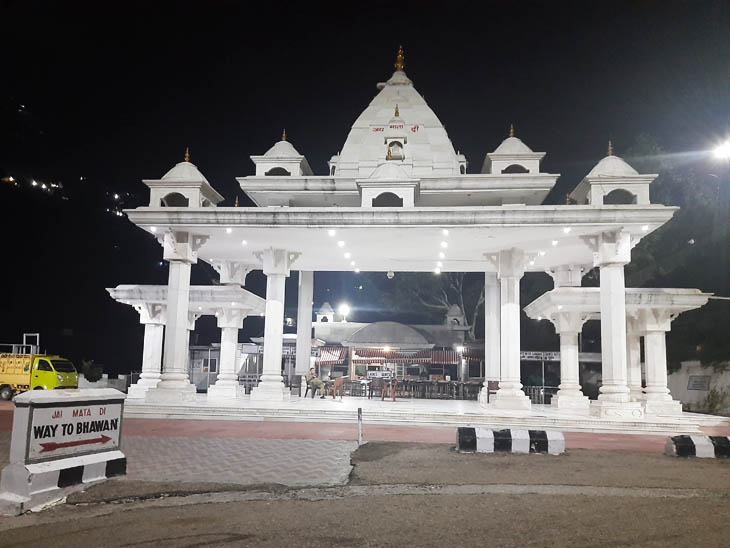 The journey of Vaishnodevi begins from here. When the yatra starts on the 16th, the devotees will pass through here to have a darshan of the mother.

Ropeway and helicopter facilities will also be available

Keeping in mind the convenience of devotees, there will also be facilities for battery operated vehicles, passenger ropeways and helicopters along with social distancing. However, any type of gathering will not be possible. Like Atka Aarti, devotees will not be able to have special darshan. A storeroom will be provided for storing goods. A sanitization campaign has also been launched on the Katra route. The facility of horse and mule will not be available to the passengers yet. The rules will be changed according to the conditions that will be created after the journey starts. 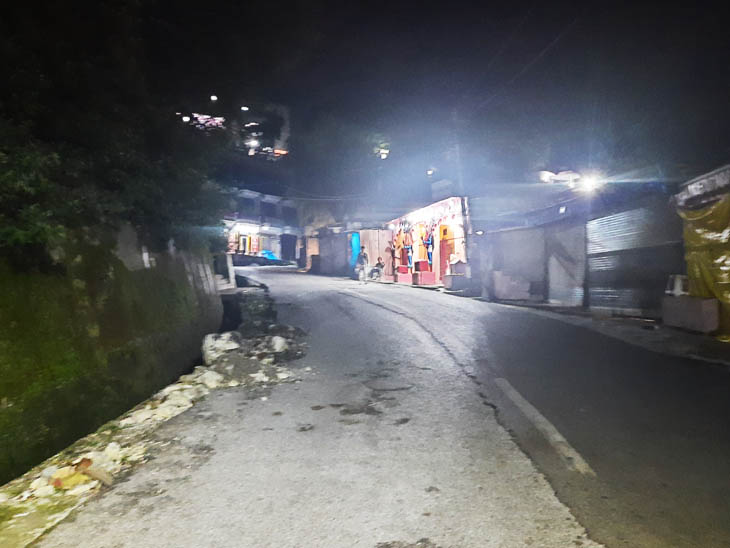 These are shops on Banganga Road, which have been waiting for customers for the past 6 months, all the shops have been closed since the lockdown.

What is necessary for devotees coming from outside

1. Reports from temple city of Jammu / Pilgrims and tourists missing from the city, so shops are closed despite being allowed; Shopkeepers say – Loss will be more on opening

2. Report of double lockdown from Kashmir / loss of 36 thousand crores to valley, trying to raise livelihood by selling apple orchards, shikaras and ornaments

3. Tourism in Kashmir decreased, jobs lost, but terrorism also decreased in one year due to ground report / strict lockdown and curfew from Kashmir

Up Police Take Custody Mla Vijay Mishra In Mp Leaves To Bhadohi Mla Supporters With Police In 25 Vehicles – UP Police departs from Madhya Pradesh for Vijay Mishra, along with supporters of MLA in 25 vehicles

Up Police Take Custody Mla Vijay Mishra In Mp Leaves To Bhadohi Mla Supporters With Police In 25 Vehicles - UP Police departs from Madhya Pradesh for Vijay Mishra, along with supporters of MLA in 25 vehicles