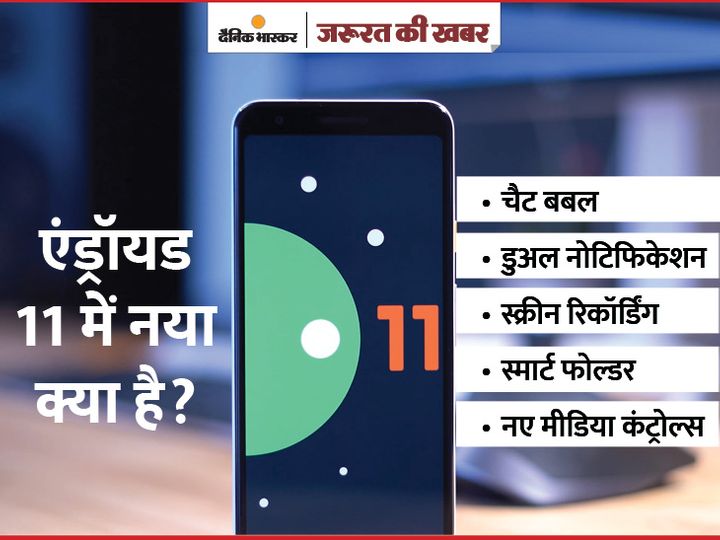 Android 11 has finally launched on Tuesday, after it was announced in February. Initially available only for Google's Pixel smartphones, this new Android update is going to be available to some other users in the coming weeks. Many smartphone brands like Oppo, Xiaomi are trying to incorporate new versions in their new models. According to media reports, Android 11 will launch apps at 20 percent faster than before.

Let's know about the new features of Android 11

The screen recording feature is similar to a screenshot, in which the user can record the movements of their screen like a video. However, even before this update, this feature was present in many smartphones. With the built-in pre-installed screen recording option, users can easily create tutorial videos with the help of the phone.

New way of talking
In Android 10, when you swipe down on the screen, the notification bar used to come down. In Android 11, now this bar will be divided into two parts. The first part will have your notifications, while the second (conversion) part will contain chat. In the conversion part, there will be chat notifications for apps like WhatsApp, Messenger and Twitter.

New controls
Smart Home Device: Some features of Android 11 will help more people who control devices like home AC, fridge and TV from the phone itself. In the new version, users can open this option only by long pressing the power button. Talking about the house, a new feature Bedtime Mode has also been included. If the user turns on this feature at night, then do not disturb mode will start and the screen of the phone will become black and white.

Music control
After updating the operating system to the new version, it will be easy for the user to listen to songs on the Bluetooth speaker or other device. If you start air plane mode then your Bluetooth device will be connected to the phone and you will not have to add it again and again.

End of messing up apps
Before the Android 11 update, if the user wanted to keep the app a place according to his own, then he had to create a folder first. With the help of Android 11's smart folder, the phone will automatically submit apps according to their work. Such as games in the Games folder.

Benefits in security and privacy too
After the new Android update, you can allow any app of the phone like location or storage only once. Earlier we used to get two options (All the Time) and (Only Vile Using App) while allowing any app. If you had chosen “All the time”, then the app used to take information of your personal data like location, storage, sensor all the time.

At the same time, when you used to choose “only while using app”, the app could access the data only at the time of use. Apart from this, if you have not been using an app for a long time, then all the permissions given to you will be automatically closed.

Which smartphone will get new update
Android 11 update will be available to select smartphone models of only a few brands. These include Google Pixel, Oppo, One Plus, Realme, Xiaomi, Nokia.