bihar assembly election 2020 first phase voting gupteshwar pandey nitish kumar cabinet ministers | The fate of the 7 ministers of the Bihar government will be decided at this stage; Manjhi and Gupteshwar Pandey can also fight in the seat where voting in this phase 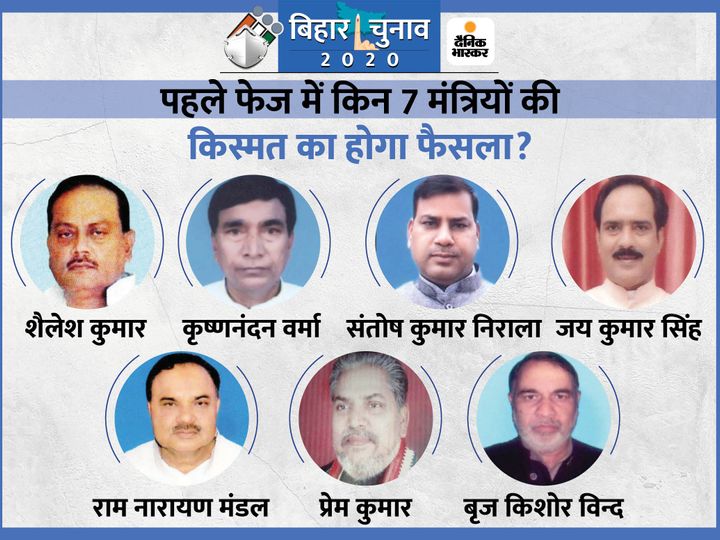 The first phase of elections in Bihar is to be held on 28 October. In this phase 71 seats will be voted. The first phase is also special because the fate of 7 ministers of Bihar government is to be decided in this. Also, the seats where the former Chief Minister of Bihar Jitan Ram Manjhi and former DGP Gupteshwar Pandey can fight, will also be voting in this phase itself.

Which ministers will decide their fate?
1. Shailesh Kumar JDU is the Minister of Rural Affairs in the Nitish government. They win elections from Jamalpur. First won in February 2005. It has since won a fourth consecutive term in October 2005, 2010 and 2015. Have also recovered from coronavirus.

2. Ram Narayan Mandal: Revenue and Land Reforms are the ministers in the government through BJP quota. He was elected MLA for the first time in 1990. Won from Banka for the 5th time in 2015. Ram Narayan Mandal came into the discussion some time back when Nitish Sarkar canceled the transfer done by his department.

3.Krishnanandan Verma: JDU is the Education Minister from Kota. He won the elections for the first time from Makhdumpur in the October 2005 election. It was followed by a second win in 2015 from Ghosi.

4. Brij Kishore Bindah The BJP quota is the Minister of Mines and Ghosts. Chanpur wins elections from the assembly seat. It was first won in the 2009 by-election. They then won for the second and third consecutive time in 2010 and 2015. First he was in BSP and later came to BJP.

5. Santosh Kumar Nirala: JDU is the Transport Minister in the government from Kota. There are two consecutive MLAs from Rajpur. Won in 2010 election for the first time from here. In 2015, he defeated Vishwanath Ram of BJP by 32,788 votes.

5. Santosh Kumar Nirala: JDU is the Transport Minister in the government from Kota. There are two consecutive MLAs from Rajpur. Won in 2010 election for the first time from here. In 2015, he defeated Vishwanath Ram of BJP by 32,788 votes.

7.Jay Kumar Singh: Nitish is the Minister of Industry Science and Technology in the government under JDU quota. Is a three-time MLA. He defeated BJP's Rajendra Prasad Singh by 2,691 votes in 2015 from Dinara assembly seat.

Gupteshwar Pandey can fight Buxar Huh
Former Bihar DGP Gupteshwar Pandey has joined JDU and now there is no doubt that he will not contest the election. In the first phase, voting is also to be held on the Buxar seat. Currently, Sanjay Tiwari of Congress is an MLA and belongs to Brahmin caste. Gupteshwar Pandey is also a resident of Buxar and it is widely discussed that he can contest from Buxar. However, it is not yet completely clear where he will fight.

Whether Manjhi will contest the elections or not, it is not yet decided that in this phase, the former Chief Minister of Bihar Jitan Ram Manjhi is also going to contest the two seats from where he contested. The last time Manjhi contested from Makhdampur and Imamganj seats. Manjhi from Makhdampur lost to RJD's Subedar Das. However, they were able to win from Imamganj.

Like Chief Minister Nitish Kumar and Deputy CM Sushil Kumar Modi, Manjhi is not in the mood to contest elections this time. However, he says that the party will decide whether he will contest the election or not. One special thing about Manjhi is that he does not win the same seat again.

So even if Manjhi contests this time, he can leave Imamganj and Makhdampur and fight Kutumba. Kutumba is also one of the seats reserved for SC.

Yadav occupied 22 seats out of 71 is
Of the 71 seats going to polls in the first phase, 22 are currently occupied by Yadav MLAs. While 7-7 MLAs are Rajput, Bhumihar and Kushwaha. There are three Kurmi MLAs in this phase. In the first phase elections, voting will be held in 13 seats of SC-ST.