Dead Body Kept On Stretcher For Months In Indore MY Hospital Mortuary Room | The picture of Indore, the body lying on a stretcher in the state's largest government hospital, became a skeleton waiting for cremation, the smell kept spreading, people kept passing their nose closed. 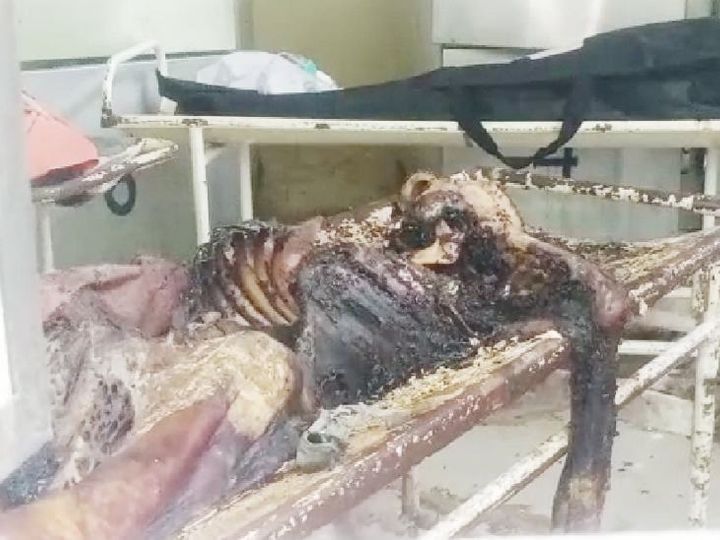 This photo is shocking. We refrain from showing such photos, but it is also important to bring out such a sad government system.

A picture showing the shame of humanity has emerged in Maharaj Yashwant Rao Hospital (MYH), the largest government hospital in Madhya Pradesh. Here a corpse placed on a stretcher in the marquetry room became a skeleton waiting for the funeral. After the matter came to light, the body immediately removed the body from there. It is being told that despite the stench, no one even paid attention to it. The hospital superintendent says that whoever is guilty, action will be taken.

MYH is always in the headlines due to negligence. The body kept in the marchery room here is said to be 10 days old. However, no one is willing to speak about whose body is and when it was brought. Due to the body becoming skeletons on the stretcher, questions are arising as to how such a big lapse has happened and whose fault it is.

16 freezers in hospital
There are 16 freezers, where the body is kept. If an unknown body is recovered by the police, it is sent to MYH for PM. After the postmortem (PM), the body is cremated by the Municipal Corporation or NGO. It is being told that the body that became a skeleton has neither PM nor any procedure. He was allowed to lie in the same way he was brought on the stretcher.

May keep unknown body for a week
MYH Superintendent Dr. PS Thakur says that the body is 10 days old. We keep the body of the unknown for a week, so that it can be identified. A notice is being issued to the Casualty Incharge whether or not the corporation has called for the funeral of the body. After this, whose negligence will be decided. After this, the responsible will be acted upon.

No place in hospital
According to Dr. Thakur, the body has been removed. At this time, we have both normal and kovid bodies. So the space for keeping it is running low. Whenever death occurs, his body comes in MYH. We currently have 16 freezers, but sometimes 21 to 22 deaths occur in a day. As such, we have limited resources. We have written a letter to get more freezers installed.