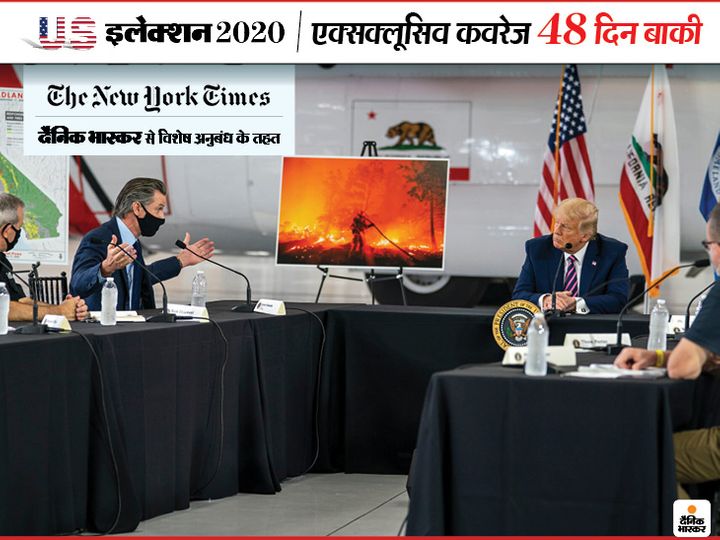 President Donald Trump arrived in California on Monday. Governor Gavin Newsom is also seen in the photo. Trump cited poor forest management as the cause of the forest fire here.

Fires in the forests of Western America have caused significant damage. Climate change is also being cited as a reason for this. However, two presidential candidates have been embroiled in rhetoric on the issue. Democrat candidate Joe Biden called President Donald Trump a firefighter. At the same time, Trump said – why did the forests catch fire? I do not think science will be able to answer this.

The differences between the two are clearly visible on important issues. The President does not take climate change seriously. They challenge the rules made for this. On the other hand, there are Biden. They consider greenhouse gases to be the cause of drastic changes in weather.

Trump woke up after weeks
Trump, who remained silent for several weeks over a California fire, finally arrived in California. Thousands of people had to flee from the fire. The sky's color changed with the smoke. And 27 people died. Surprisingly, here, Trump blamed weak forest management, not climate change. Biden answered this in Wilmington. Said- Disasters like floods, storms occurred in Central and Western America. If Trump is elected for a second term, then the country's suburbs will be threatened.

Biden questions
Biden said if we give Trump four more years, he will continue to deny the issue of climate. How many woods and ravines will there be? How many cities will be flooded? How many cities will be destroyed in the storm. If you choose to ignite the climate, it will be like throwing America into the fire. The wind speed was high on Monday. Flames erupted. In the afternoon, dust and smoke were seen in the skies of most of America, even New York and Washington.

Because of this, some firefighting aircraft could not fly. The fire spread to new areas of Idaho, Oregon and California. In Oregon, 10 people have been confirmed dead. 22 are missing. State Chief Forest Officer Dude Graefe said – We have got some success. On Wednesday and Thursday, rain would get some, but lightning could increase the risk.

Trump also saw smoke
Trump arrived in Sacramento on Monday. Earlier, he did not even mention about wildfire. About 3 lakh 63 thousand acres of forest have been destroyed here. The fire has been controlled in most parts here. At the McLan Airport, he saw smoke as he left the plane. Here he spoke on this disaster. The President said – When the trees are dry after falling, they become like matchsticks. There are also dry leaves. They act as ghee in the fire. Therefore, the matter is related to forest management, not climate change.

California Governor said – Only 3 percent of the total forests here are with the state. 57 percent is with the central government. Apparently, Trump raised the issue of forest management, but the governor made him wonder by telling the facts.

Question to the president
The Secretary of Natural Resources of California told Trump – If the problem is not seen from the perspective of science, it will be difficult to save millions of people in California. Trump took it lightly. Said- I think science has the answer to these things. Mayor Darrell Steinberg said – We need national leadership on the issue of climate emergency. Environmental experts agree that what Trump has said is not wrong, but its scientific side should not be dismissed either. Trump's supporters praised his arguments.

Biden's focus on clean energy
Biden considers climate change a challenge. He promised that if he comes to power, in four years two billion dollars will be spent on clean energy. The use of oil, gas and coal will be phased out. Five lakh electric vehicle charging stations will be built. 1.5 million energy efficient homes will be built. By 2035, carbon emissions from the power sector will be discontinued.

The Republican Party's political consultant Wit Eresh is also unhappy with Trump's stance. He said – Denying climate change and science will not prove beneficial for the President.