IPL 2020 UAE | IPL 2020 in UAE Latest Analysis; What is Bio-Bubble Safety Plan? What If IPL Teams Players Tests Positive For Coronavirus? All You Need To Know | For 80 days, IPL's bio-bubble will have its own world, no one can go outside it, players have to give five tests before coming in. 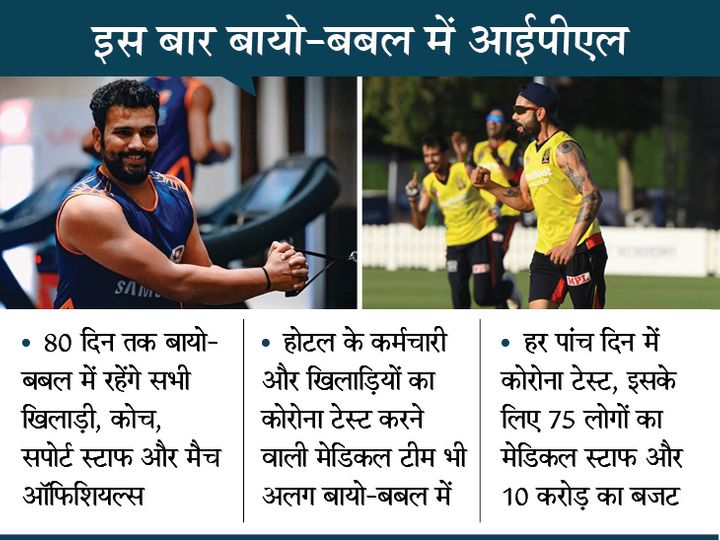 The IPL schedule was released on Sunday. The teams have reached Dubai around 20 August. All players, coaches, support staff and match officials are placed in Bio-Secure environment (also known as Bio-bubble). All of them will have to live in it for 80 days.

So let's understand what this bio-bubble is? How does it work? How will it protect against corona? What would happen if a player broke a bio-bubble? Find answers to similar questions …

1. What is Bio-bubble?
In simple language, it is an environment in which the living is completely cut off from the outside world. That is, the players participating in the IPL, the support staff, the match official, even the hotel staff and the medical team doing the corona test are not allowed to go outside the prescribed scope. One cannot come in contact with anyone from outside the world.

All the players, coaches, support staff taking part in the IPL had the Corona Test twice before reaching Dubai. Upon reaching Dubai, everyone was quarantined for seven days. During this, there were three corona tests. Those whose reports came out negative have joined this bubble. The quarantine of the entire team was extended by seven more days when the report of 13 people from Chennai team came positive.

Each member involved in the bubble will only be allowed to visit the ground and their hotel. Apart from this, they will not be able to meet anyone. Not even from his fans, friends and relatives. Those involved in TV broadcasts and the rest of the staff are also placed in a separate bubble. Any person in the bubble will not be allowed to leave until the tournament is over.

3. If someone broke the bio-bubble?

4. Has there ever been a case of bio-bubble breaking?

Talking about international cricket, two players have broken the bio-bubble. Joffra Archer met a friend by breaking the bio-bubble during the England West Indies series. After that he had to go to Self Quarantine. Even the England team management dismissed him from the second Test against the West Indies.

Mohammed Hafeez, the Pakistan team player who went on a tour of England, broke the bio-bubble and met the family and was quarantined for five days. After this, he was allowed to join the team only after the Corona report came negative twice.