It was blatant disregard to host Russia's advisory: MEA on Pak NSA projecting 'fictitious' map of Pakistan at an SCO meet | In the meeting of national security advisors, Pakistan deliberately kept the disputed map, India's NSA Doval left the meeting in protest 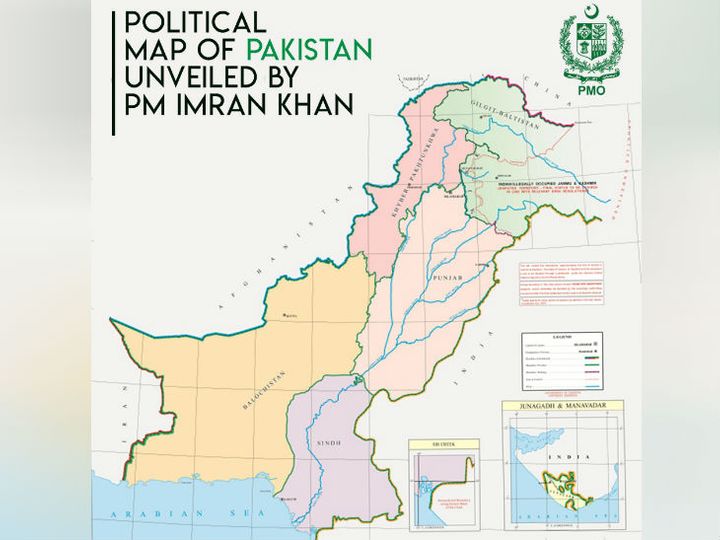 On 4 August, Pakistan Prime Minister Imran Khan released a new map of the country, which described Jammu and Kashmir, Ladakh and Junagadh as part of Pakistan.

Pakistan acted against India in a meeting of the National Security Advisors of the Shanghai Cooperation Organization (SCO) member countries. The NSA of Pakistan deliberately projected the map which was recently approved by their government in this meeting.

India's NSA Ajit Doval protested against this act and boycotted the meeting. The Foreign Ministry said that what Pakistan did in this meeting hosted by Russia in Moscow is clearly a violation of the rules of the meeting. India left the meeting after discussing it with the host. However, Pakistan continued to offer the wrong view of the meeting even after this.

Pakistan released map before 5 August
In August, Pakistan released a map showing Jammu and Kashmir, Ladakh as part of Pakistan. In this, Junagadh and Sir Creek of Gujarat were also described as part of Pakistan. This map will be used throughout the course of the country. Pakistan took this step just one day before 5 August. Last year, on the same day, the Government of India removed Article 370 from Jammu and Kashmir.

Imran's cabinet approved the map
Prime Minister Imran Khan approved the new political map of Pakistan for the first time in the cabinet meeting citing the Jammu and Kashmir region as his share. Imran said that the new map has the support of all political parties and people of Pakistan.