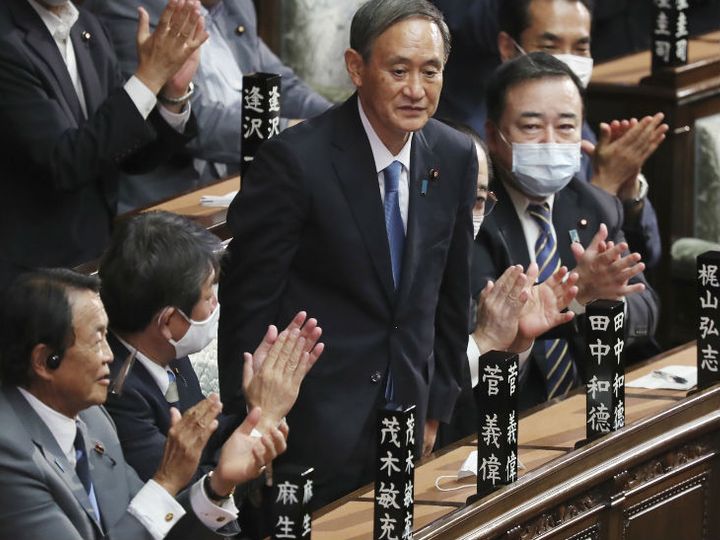 MP congratulating Yoshihide Suga (center) on Wednesday after being appointed the new Prime Minister of Japan.

Tokyo Former Japan cabinet secretary Yoshihida Suga was formally appointed as the next Prime Minister of the country on Wednesday. Suga had confirmed his position in the election of the Ruling Liberal Democratic Party (LDP) two days ago, leaving behind two leaders of his party. Voting for this took place in the country's parliament on Wednesday. In this, he got 314 votes out of 465 MPs. The post was vacant after former Prime Minister Shinzo Abe resigned on August 28.

Prime Minister Narendra Modi has congratulated Yoshihidae. He tweeted- Heartfelt congratulations to Yoshihida Suga on becoming the Prime Minister of Japan. I look forward to taking our special strategy and global partnership to new heights together with them.

Heartiest congratulations to Excellency Yoshihide Suga on the appointment as Prime Minister of Japan @kantei. I look forward to jointly taking our special strategic and global partnership to new heights. @sugawitter

Suga's father was a strawberry farmer

Yoshihidae Suga was born on 6 December 1948 in Akita State. He is the first person from his family to enter politics. Suga's father Wasaburo also worked at the South Manchuria Railway Company during World War II. He returned to Japan after surrendering his country in the war. He started strawberry cultivation in Yuzawa town of Akita state. Being an elder son, Suga used to help his father in the fields in childhood. His mother Tatsu was a school teacher.

Worked even in Security Guard and Fish Market

Suga did not want to do farming like his father. Therefore, he ran away from home to Tokyo after completing his schooling. After coming here, he did many part time jobs. He first started work at the cardboard factory. After getting some money, he joined Hosei University in 1969. He continued to do more parttime to continue his studies and to pay university fees. Suga worked in a local fish market and also as a security guard.

You can also read these news related to Japan …

1. 65-year-old Abe, who was the longest PM in the country, left the post, saying – do not want poor health to affect work

2. PM Shinzo Abe of Japan arrives at the hospital for the second time in 7 days; His record of being Prime Minister for seven and a half years now is his name

Government Tax Collection Reduced By More Than 22 Percent In Second Quarter – Bad news for the economy, 22.5% tax collection in the second quarter