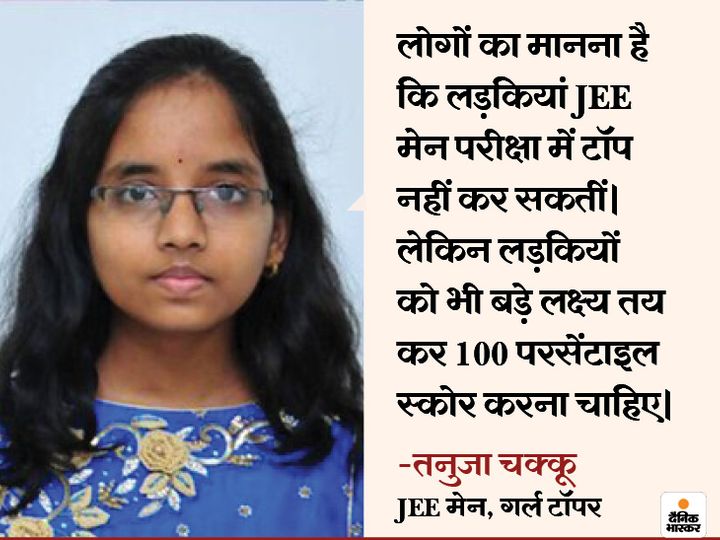 Regarding the Joint Entrance Examination of Engineering (JEE), it is said that girls cannot top this exam, but 17-year-old Tanuja Chakku is among those who break this myth. Tanuja is the only girl to achieve 100 percentile in the list of 24 toppers in the 2020 JEE Main result.

This time, out of 3.08 lakh girls who appeared in the exam, Tanuja, who is the only girl to achieve 100 percentile, says that how can Darna, if girls want to reach 100 percentile by setting big goals.

Tanuja's father is a teacher in a government school in Telangana. Tanuja says, “It is true that it is not easy for girls to reach here. There are many social factors associated with the education of girls, which are not with boys. Yet for this, girls work hard and can achieve the desired goal. With this thinking, they should try to achieve 100 percentile by setting a big target. ” Earlier, Tanuja had achieved 99.995 percentile in the examination held in January session.

Study 10 hours a day and dance together

Tanuja says that the lockdown was like a holiday for me. She used to study for 12 hours daily. Reading took 8 to 10 hours during the epidemic. Tanuja had also started practicing Western dance to keep himself calm and happy in lockdown with full focus on studies. Talking about the preparation, she says that along with JEE Main, she also prepared for JEE Advanced and had divided the time for both exams.

Notes made by yourself will be better prepared

Tanuja shifted his focus to sample papers and solved as many papers as possible. Not only did she become motive by solving sample paper, she was also more confident during the exam. He also said that self-made notes prove to be more helpful for better preparation for the exam, as it helps you a few days before the exam.

She says that if the concept of the exam is clear, then one can easily clear the exam. If needed, strengthen the preparation by giving mock tests. After achieving success in JEE Main, Tanuja now wants to study computer science from IIT Bombay. He explained, “I like mathematics. I want to study engineering from here, because I have heard from seniors that this is the best IIT. ”

JEE Advanced is also a test of knowledge over time

Regarding the JEE Advanced, she says that it is a knowledge test over time. JEE Main is much easier as compared to advanced, because there is more time to solve questioning. In such a situation, I am afraid that I can complete the advanced examination or not. However, my goal during the exam is to have my questions framed in my own. She said that she usually solves Physics, then Chemistry and then Maths first in the exam, because sometimes the time is reduced due to the length of the paper.