Kafeel Khan News: Gorakhpur Dr. Kafeel Khan in RajasthanJaipur After released from Mathura jail at midnight | Dr. Khan said- Priyanka Gandhi has said that we will give you a safe place, UP government may put another case 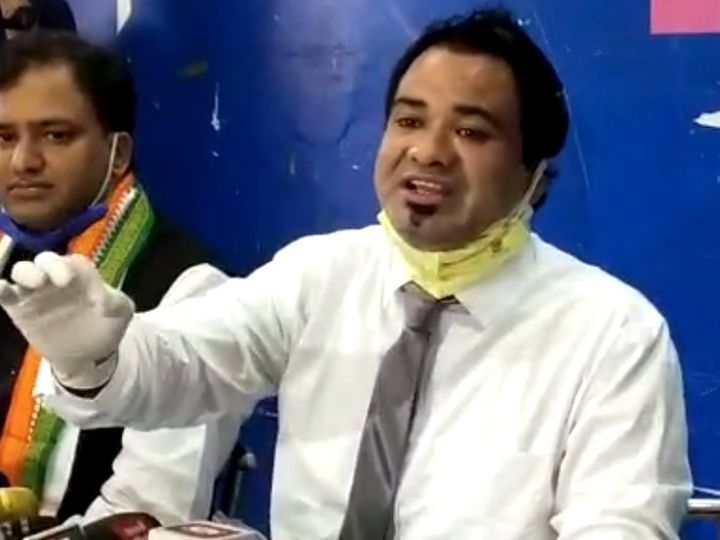 Dr. Kafeel came to the discussion about the incident of death of 60 children in a few days due to lack of oxygen in 2017 at BRD Medical College, Gorakhpur.

A day after coming out of Mathura jail, Dr. Kafeel Khan reached Jaipur on Thursday. At the press conference here, he said, 'Priyanka Gandhi asked me to come to Rajasthan. They said that we will give you a safe place. The UP government may impose another case. Dr. Kafeel said that there is a danger of life in Uttar Pradesh. Therefore, now we will be a little far from UP. '

Dr. Kafeel said that Mathura is situated along the Rajasthan border. Therefore, after being released from jail, I came to Bharatpur. Priyanka ji also helped. There is a Congress government in Rajasthan. So we can be safe here. The family feels the same. Because, in the last seven and a half months, my mental haresment happened. Physically tortured. Every time I was told not to speak against the government. That is why I want to live in a place where I can spend time with family.

I will also be safe in Bihar, Assam and Kerala
Dr. Kafeel said that my family feels that I can be implicated in a case again. I will be safe even if I go to Bihar, Assam and Kerala. Rasuka was imposed against me as baseless and conspiracy. I was unnecessarily placed in jail. The Allahabad court stated in clear terms that the DM of Aligarh misused law and order.

I will request the Chief Minister to join the job
Dr. Kafeel also said on the other hand that I will write a letter to the CM of my state. Will request them to join my job again. 10 years is my experience. So maybe I can contribute to fight Corona. I will present myself as a volunteer. Those who are making the institute vaccine can do research on me. Can you give me a dose of vaccine?

Arrested after giving inflammatory speech
Significantly, on Wednesday, Dr. Kafeel Khan has been released from jail. Dr. Khan was accused of making inflammatory speech at Aligarh Muslim University on 13 December 2019. He was arrested by the UP Police from Mumbai in January. Later, the Aligarh Collector took action against him under the National Security Act (NSA) on charges of spreading hatred.

In February, he was again arrested and sent to Mathura jail. He was released on the orders of the Allahabad High Court.

Came into discussion after the oxygen scandal
Dr. Kafeel came to the discussion about the incident of death of 60 children in a few days due to lack of oxygen in 2017 at BRD Medical College, Gorakhpur. Dr. Kafeel was praised for saving the lives of children by arranging oxygen cylinders in an emergency. He was later processed along with 9 other doctors and staff. Dr. Kafeel was given a clean chit in the departmental inquiry.