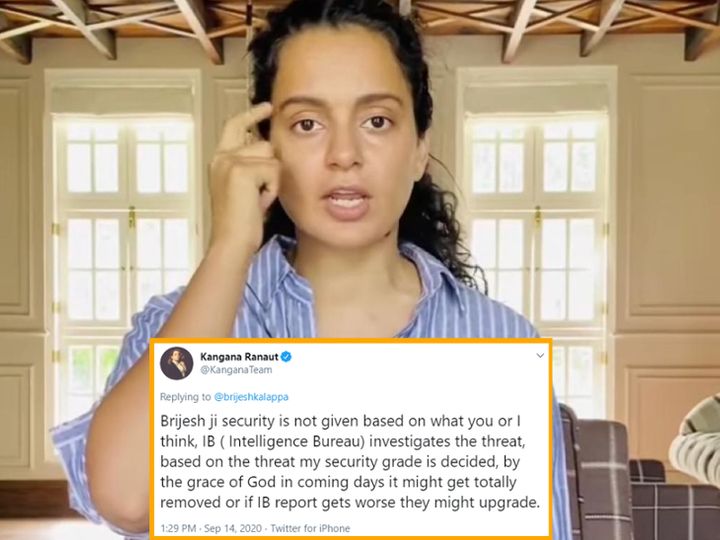 Kangana Ranot was given Y-category security by the Central Government before her visit to Mumbai on 9 September.

If Kangana Ranot is to be believed, the security of the Y-category given to her by the central government can also be upgraded. He made this claim while giving a befitting reply to the tweet of Supreme Court lawyer and Congress spokesperson Brijesh Kalappa in which he questioned his security category.

Y category security for one person costs the center over 10,00,000 / – each month. This money is borne by taxpayers.
Now that Kangana is safe in HP (far away from POK), will Modi Sarkar kindly withdraw the security detail provided to her ?! https://t.co/UdEArImhJu

Kalappa wrote the tweet, “Y-category security costs more than Rs 10 lakh per month for a person. This money comes from tax payers. Now Kangana is safe in Himachal Pradesh (away from PoK). Will Modi remove the security given to him? “

Kangana wrote this in response

Kangana has responded to Kalappa and wrote, “Brajesh-ji security is not given on the basis of you or my thinking. The IB investigated the threat. Based on the threat my security grade was fixed. God bless me. In the coming days this security will be completely removed. Or they can upgrade it if the IB report is bad. “

Brijesh ji security is not given based on what you or I think, IB (Intelligence Bureau) investigates the threat, based on the threat my security grade is decided, by the grace of God in coming days it might get totally removed or if IB report gets worse they might upgrade.

Security was first found by traveling to Mumbai

Kangana reached Mumbai on 9 September amid a dispute with the Shiv Sena. Earlier, the central government announced to give them the security of Y-category. In fact, Kangana was constantly threatened by the Shiv Sena after comparing Mumbai to PoK. Party MLA Pratap Sarnaik threatened Kangana to break his mouth. At the same time, Maharashtra Home Minister Anil Deshmukh had demanded a sedition case against him.

There were threats even after the statement in the drugs case

Kangana is also constantly making statements in the case of Sushant Singh Rajput's death. He used the word bollywood for Bollywood and said, “Many people will be behind bars if the Narcotics Control Bureau examines drugs in Bollywood. If blood tests are done, there will be many shocking revelations. Hopefully, the Central Government Mission for Clean India Will also clean up the filth of Bollywood. ” Kangana was also threatened after this statement.