Kangana Ranaut says her mother adopted a Dalit woman's daughter, got her married: Raju di grew up with us and at the age of 21 mom married her to Bhumi Jiju, they live in Chandigarh | Kangna Ranot said- My mother had adopted a dalit girl, had her married as a daughter, I know a similar modern India. 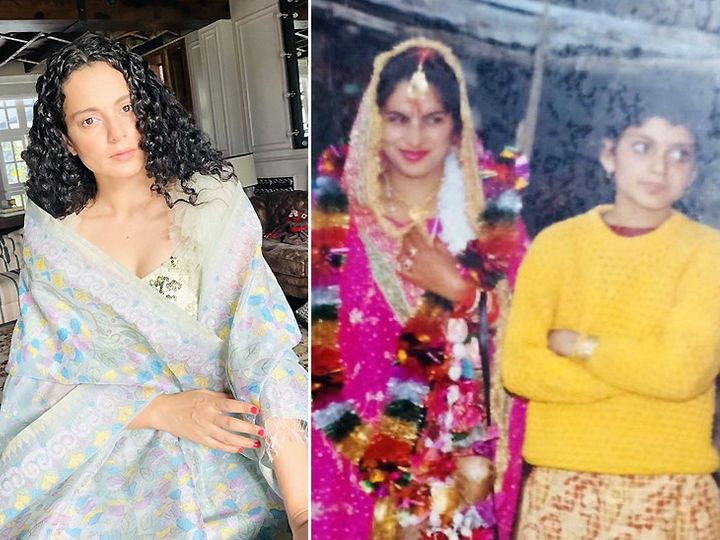 According to Kangana, his mother raised Raju Di as a daughter, taught him and got him married.

Kangana Ranot recently made several tweets on social media, describing how her mother had adopted a Dalit girl and nurtured her like her other daughters. According to Kangana, he did this because many people were constantly tagging reports of atrocities on Dalits in the country, calling him anti-Dalit.

Kangana wrote in her first tweet, 'Dear friends, I see that a lot of people are tagging me news related to atrocities on Dalits and many more intelligent people who know India only through these news stories. , They make fun of my idea of ​​modern India. For such people, I am sharing the story of my life and my sister Rajudi who is the bride in this photo. '

Dear friends, I see a lot of people tag me in all the news of atrocities inflicted on Dalits and many over smart people who know India only through news mock my take on modern India, sharing the story of my own life n my sister Rajudi the bride in the picture, do read the thread ? pic.twitter.com/VYviE42BtH

In the next tweet, Kangana wrote, 'My mother was newly married, she was very sad to see the plight of a Dalit woman named Mansa in the village. She had three girls but no source of income, after which, against the wishes of her in-laws, my mother adopted the princess, the youngest child of the woman, sent her to school and then to college. '

My mother was newly married she got deeply affected by the plight of a Dalit woman called Mansa in the village who had three daughters but no source of income, against her in-laws wish she adopted the youngest baby girl named her Rajkumari, sent her to school later to college (cont)

Why are such things not shown in any news

He further said, 'Raju Di grew up with us and at the age of 21, his mother married him to Bhumi Jiju. They live in Chandigarh, their son Bhanu got married this week, when I got cute pictures of that couple, my mother said that the girl is a Brahmin, it will never be shown in any news. '

Raju di grew up with us and at the age of 21 mom married her to Bhumi Jiju, they live in Chandigarh, this week her son Bhanu got married, when I received the lovely pictures of the couple my mother said in passing the girl is a Brahmin, this will never be shown in any news ? pic.twitter.com/8o63XqV52C

I trust you so why do you call me a liar?

He further wrote, 'I have never experienced the things you all tag me for atrocities against Dalits, but I still trust you, but when I share that modern India with you, My mother gave me, so who are you to call me a liar? By the way, these children are looking very good together, please bless them. '

The atrocities against Dalits you all tag me on I have never experienced but I believe you, but when I share the modern India my mother gave me who are you to call me a liar? Anyway these children look so good together, please bless them ?? pic.twitter.com/oCY1yNRJct

Kangana said- she used to live with us in our house

After this, Kangana in her next tweet, clarifying some things, wrote, 'I want to clarify some things that the whole village is aware of, these facts can be investigated and people can also be interviewed.' 1) Raju Di lived in our house like our sister. 2) Initially she used to help mother in kitchen, Amma did a big job in this that Raju Di served food to everyone. 3) Some relatives also condemned this act of the mother, but no one dared to say anything in front of Raju Di. 4) I never called Rangoli as didi, but Papa had ensured that we call Raju Di as didi. 5) Ranges and Raju used to share The Bedroom, where I was not allowed to go because of my young age and Girls Talk, this is the India I know.

3) Few relatives condemned mom’s actions but noone dared say anything in front of Raju di.
4) I did call Rangoli didi but papa made sure we call Rajudi didi
5) Rangs and Raju di shared bedroom, where I am allowed because of my age and girl talk.
This is the India I know ?

'Mansa Mausi we are like a mother to children'

Sharing a photo in her last tweet, Kangana wrote, 'Raju Di's mother … Mansa Mausi is with me in our ancestral house, she is like a mother to me and all the children in the house, this is our parents Has taught us, I want to encourage it all over India, not the ruthless conservative India that people keep glorifying for their political gains. '

Rajudi's mom … Mansa mausi with me in my ancestral house, she is like a mother to me and all the children of the house, this is what our parents taught us, I want to encourage this India not the brutal orthodox sadistic India which people glorify for their political gains ? pic.twitter.com/ucpBkCNhMA

The process of tagging Kangana related news of Dalit atrocities started when a few days ago she had spoken of not having casteism in modern India and abolishing reservation. He wrote, 'The caste system has been rejected by modern Indians, everyone knows that even in small towns it is not acceptable at all by law and order. Although for some it is nothing more than a sad pleasure, only our constitution is holding it in the matter of reservation, let it go. Let's talk about it. '

Cast system has been rejected by modern Indians, in small towns every one knows it's not acceptable anymore by law and order its nothing more than a sadistic pleasure for few, only our constitution is holding on to it in terms of reservations, Let Go Of It , Lets Talk About It ?