Mukesh Ambani Reliance Jio 4-Year Journey | Know How Did Reliance Jio Changed The Telecom Industry? All You Need To Know Reliance Jio – 4G Internet – RI History In Timeline | Isha Ambani was harassed by slow internet, so he gave the idea of ​​live to father Mukesh; This freed Reliance in 4 years 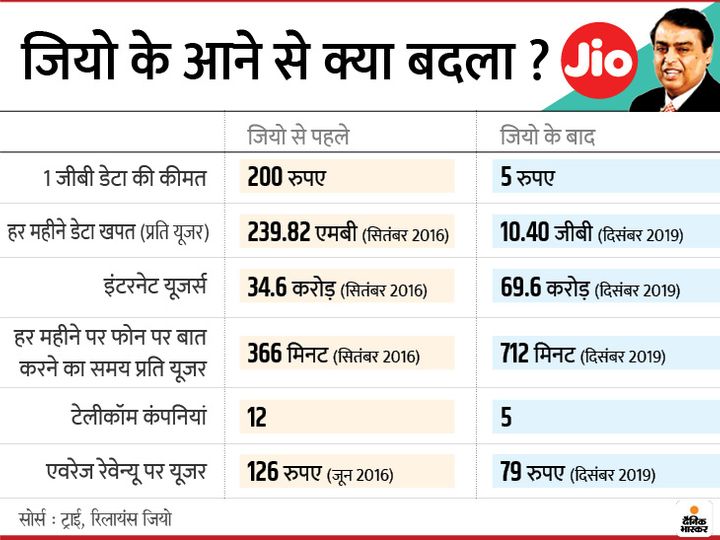 The date was 5 September 2016. Mukesh Ambani launched Reliance Jio for the common users of the country. That too absolutely free. With 4G data and voice calling. After this announcement by Mukesh Ambani, shares of Bharti Airtel, the country's largest telecom company at that time, fell 8.5%. Idea, the second largest company, lost 7% of its market value. Even Reliance's stock fell 3%.

Mukesh Ambani waged a price war in the telecom market with the launch of Jio. According to Reliance, at that time the price of 1 GB data was up to 200 rupees, but today it has become 5 rupees. 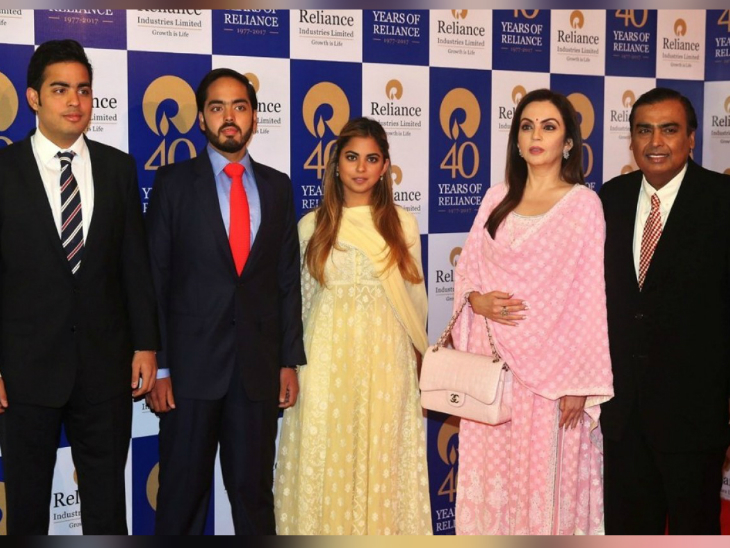 But do you know how the idea of ​​Reliance Jio which changed the telecom industry so much, came to Mukesh Ambani? How did live grow in 4 years? What happened to the telecom industry? In this story we try to understand the answers to many such questions …

He had narrated an anecdote, 'The idea of ​​Jio was first given to me by my daughter Isha. She studied at Yale University in the US in 2011 and came home for a few days during the holidays. He was to submit some course work to the university. He told me – Dad, how useless the internet is in our house.

Ambani also told at that time that his son Aakash had also told him that earlier telecom meant only voice calling for people, but now everything has become digital. Apart from this, a lot of work can be done through the Internet.

It was only after the daughter's troubles and the son's suggestion that her mind came back to the telecom sector and the idea of ​​starting Jio. 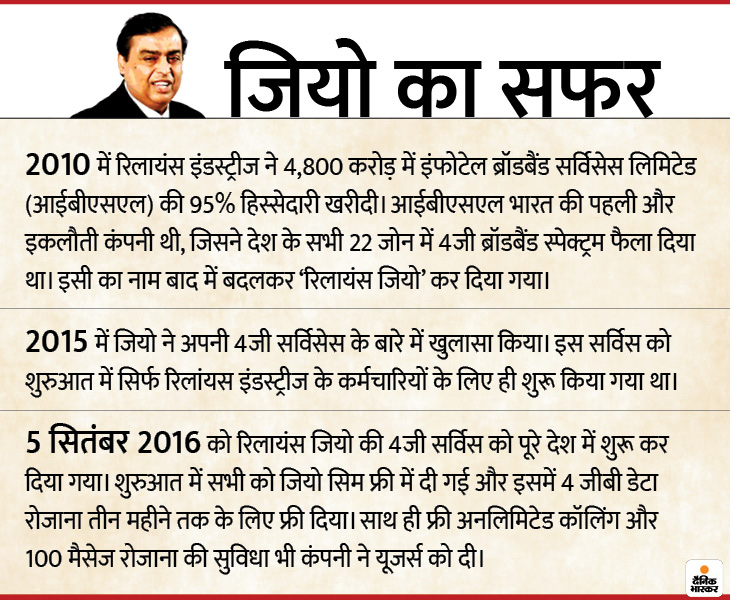 The beginning of live again
Jio may have started in September 2016 and Isha had trouble in 2011, but perhaps before that Mukesh Ambani was in the mood to get into telecom. This is because in 2010, Reliance Industries bought Infotel Broadband Services Limited (IBSL) 95% stake for Rs 4,800 crore. IBSL was the first and only company in the country to spread 4G broadband spectrum in all 22 zones of the country. Later it was named 'Reliance Jio'.

According to Reliance Industries' quarterly report, as of June 2020, the company has over 398 million users. Within just 4 years, Jio has become the largest telecom company in the country. 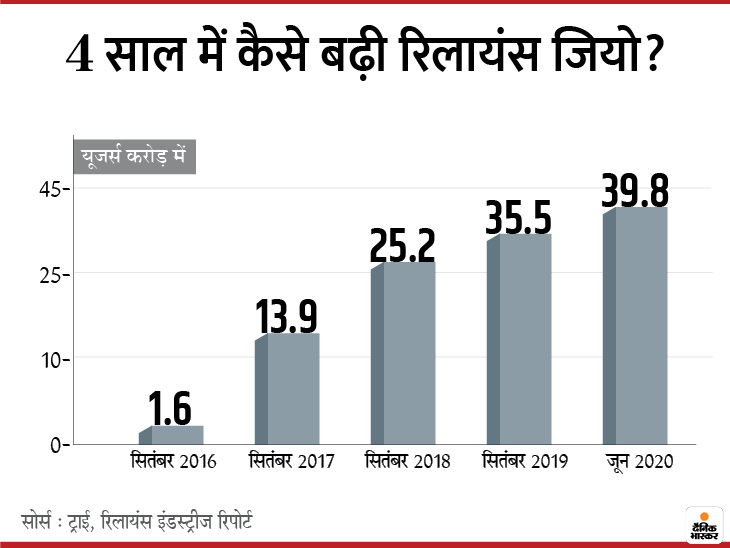 When Jio came, there were 12 telecom companies in the country, now only 5 are left
In September 2016, when Reliance Jio entered the telecom sector, Bharti Airtel used to be the largest telecom company in the country. At that time Airtel had around 26 crore users. But, now Airtel has become the number two company and now it has around 32 crore users.

The impact of the telecom sector after Jio's entry can be gauged from the fact that till Jio's arrival, there were 12 telecom companies in the country, but now only 5 companies are left. Of these, two BSNL and MTNL are government.

Jio had a market share of 1.5% as of September 2016, which has grown to over 34% by May 2020. After the arrival of Jio, not only Vodafone and Idea have merged, but other small companies have either merged or closed in big companies. 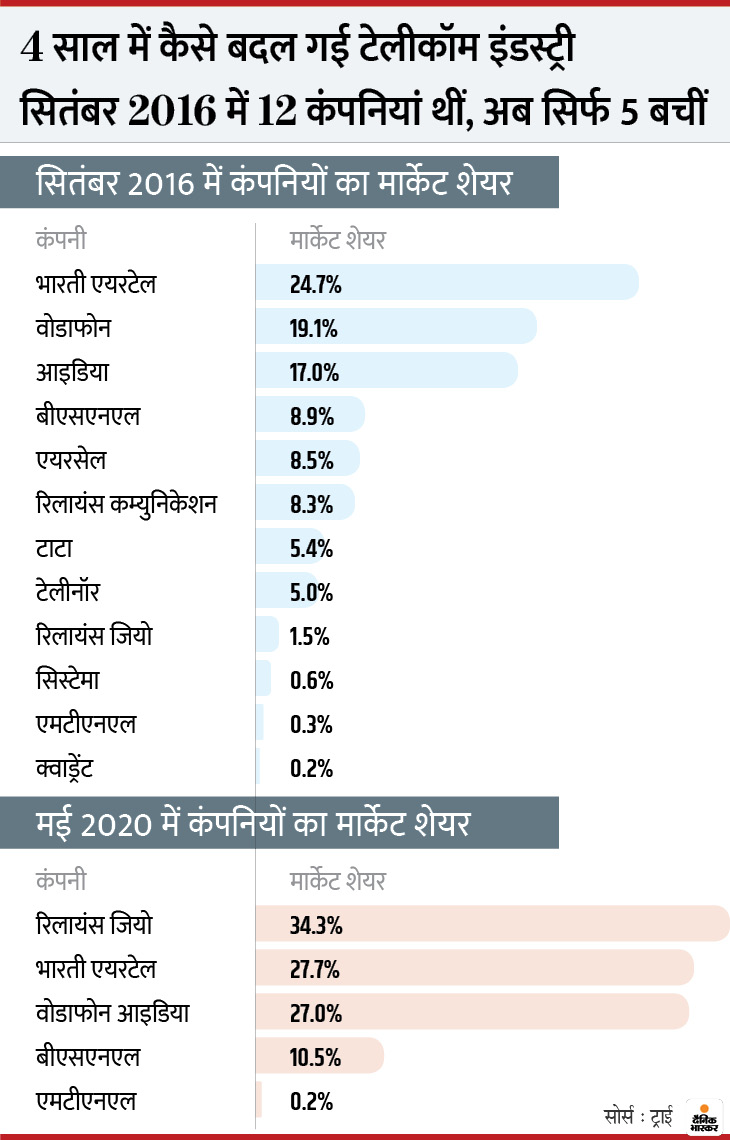 How much Reliance Industries and Mukesh Ambani benefit from Jio?
1. Revenue : Reliance revenue increased due to Jio 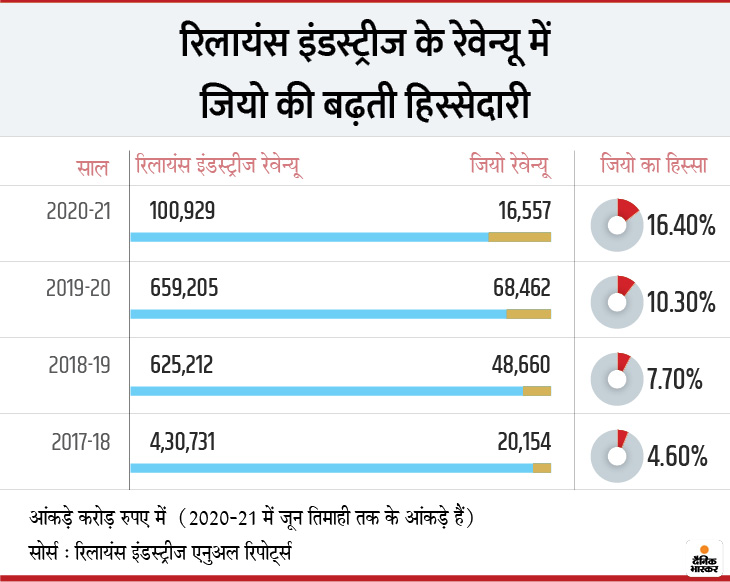 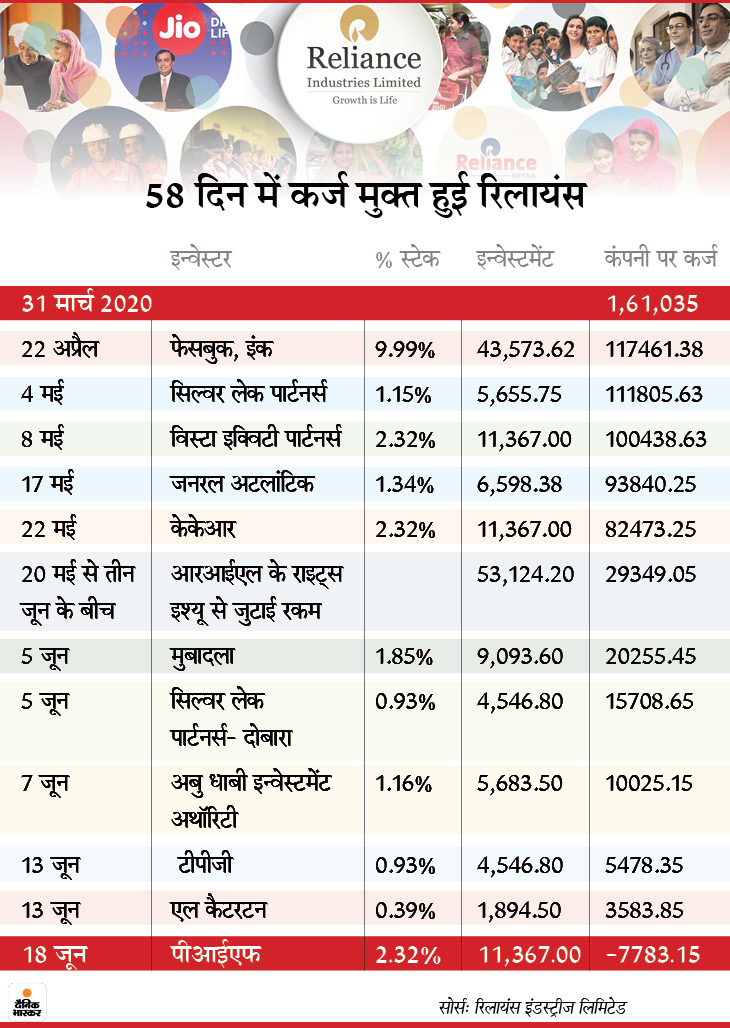 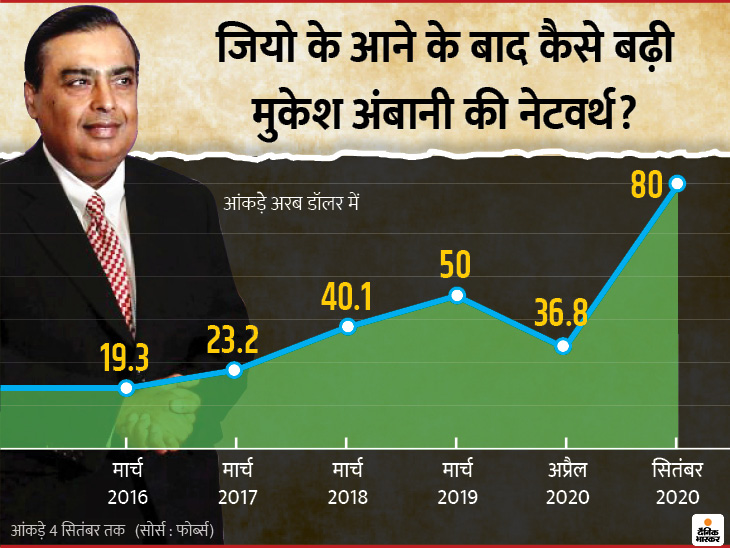 You can also read these news:
# 1. How much wealth the rich have ?: Mukesh Ambani's net worth is equal to the GDP of 9 small states of the country; The wealth of the world's top-3 billionaires is more than the budget of India
#2. Bezos with a net worth of $ 200 billion: Jeff Bezos' net worth was not even 12% compared to Bill Gates 21 years ago, 77% more than him today; Did not increase your salary by one rupee for 22 years
# 3. Apple $ 2 trillion company: iPhone's share of Apple's revenue is less than 50%, but there are more ways to earn; Learn how the 5 big companies of the world earn

Teachers' Day 2020: Real Teacher Stories During The Coronavirus Pandemic | Now I always keep a mobile with me, before going to sleep at night and in the morning I first see the phone to see if there are any messages from the children.

Teachers' Day 2020: Real Teacher Stories During The Coronavirus Pandemic | Now I always keep a mobile with me, before going to sleep at night and in the morning I first see the phone to see if there are any messages from the children.