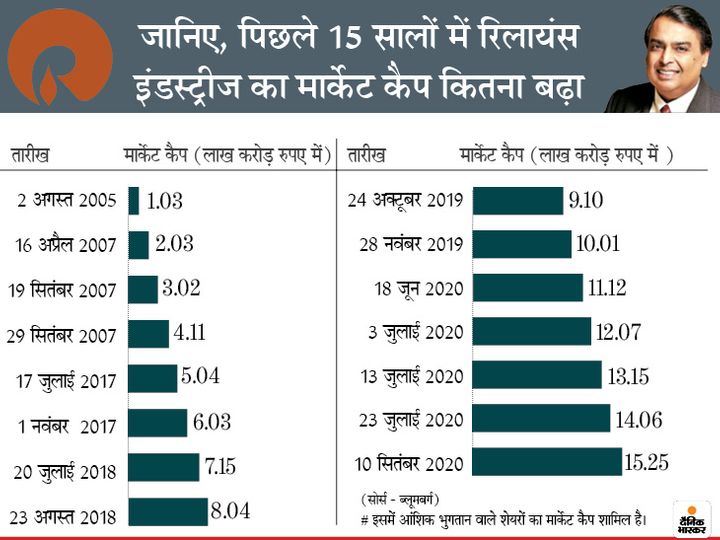 Reliance Industries has made history in the domestic stock market on Thursday. The company's market cap has reached a level of Rs 15.25 lakh crore. Reliance is the only company in India to reach this level. It is followed by Tata Consultancy Services (TCS), which has a market cap of about Rs 8.76 lakh crore.

This year, many big companies across the world have invested in different ventures of Reliance Industries. This includes big names like Facebook, Google, Silver Lake. Earlier, the company's market cap had crossed Rs 11 lakh crore on June 18 this year.

Released the right issue for the first time in three decades

The total market cap includes the share of Reliance's share as well as the partial paid right issue. Let us know that for the first time in three decades, debt-free Reliance issued a right issue at a price of Rs 1257 this year. The issue was listed on the market on 15 June. On September 10, Reliance Industries shares closed at an all-time high of 2,344.95 and Reliance PP shares rose 10 percent to 1394.55 on the BSE.

Reliance Retail Ventures Ltd (RRVL), a subsidiary of Reliance Industries, is going to acquire the retail and wholesale business and logistics and warehousing business of Future Group. This will allow Reliance to reach over 1,800 stores of Future Group's Big Bazaar, EGDAY and FBB, spread across 420 cities in the country. This deal has been finalized in 24713 crores.

In April, the social media giant Facebook invested $ 5.7 billion (Rs 41,814 crore) to buy a 10 percent stake in Reliance Industries group company Jio Platform Limited. The company is also in talks with Saudi Aramco to sell a 20 percent stake in its oil to chemical business.

A Bloomberg report says that Reliance Industries has offered Amazon to buy a 40% stake in its Reliance retail business. That is, if this deal happens, Reliance can give 40% of its retail subsidiaries to Amazon.