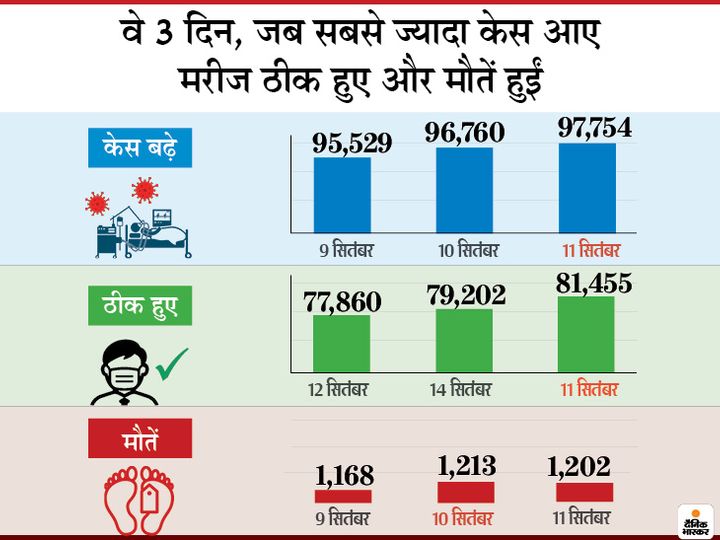 The number of corona patients in the country crossed 49 lakhs. In 24 hours, 81 thousand 911 people were found infected. With this, the number of infected has reached 49 lakh 26 thousand 914. It is a matter of relief that 38 lakh 56 thousand 246 people have been cured among them.

On the other hand, Corona report of Delhi Deputy CM Manish Sisodia has come positive. On Monday, he tweeted and gave information about this. Earlier, three other MLAs from Delhi Girish Soni, Pramila Tokas and special Ravi have also been infected. The three MLAs, including Sisodia, failed to attend the assembly session on Monday. 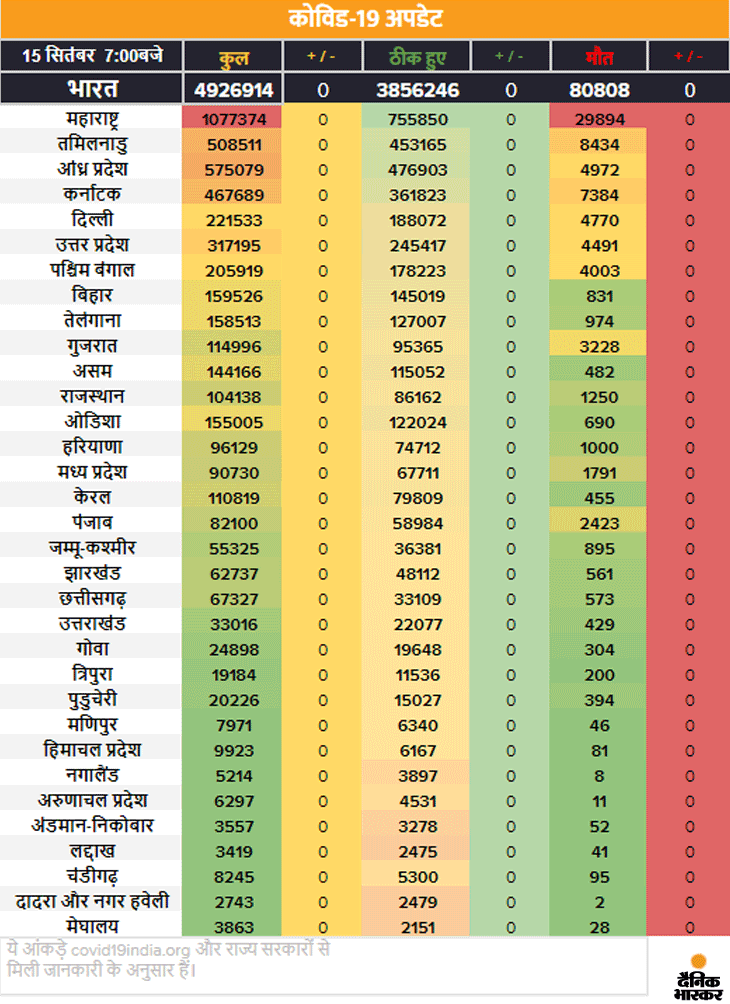 1. Madhya Pradesh
The number of infected in the state has exceeded 90 thousand. The highest number of 2483 cases were reported on Monday. At the same time, 29 people have also died in a single day, out of which 12 are in Gwalior district. 9 people in Chhindwara and 5 in Bhopal also succumbed during treatment. The rate of infection has also reached 11.9%. If the cases continue to grow at the same pace in the state, by September 21, the total number of infected will cross one lakh.

Chief Minister Shivraj Singh Chauhan said that the government will now tell the people about the horrors of Corona, so that people are afraid and take care themselves. Social, religious, business organizations, voluntary organizations have to be proactive and warn about the prevention of corona. 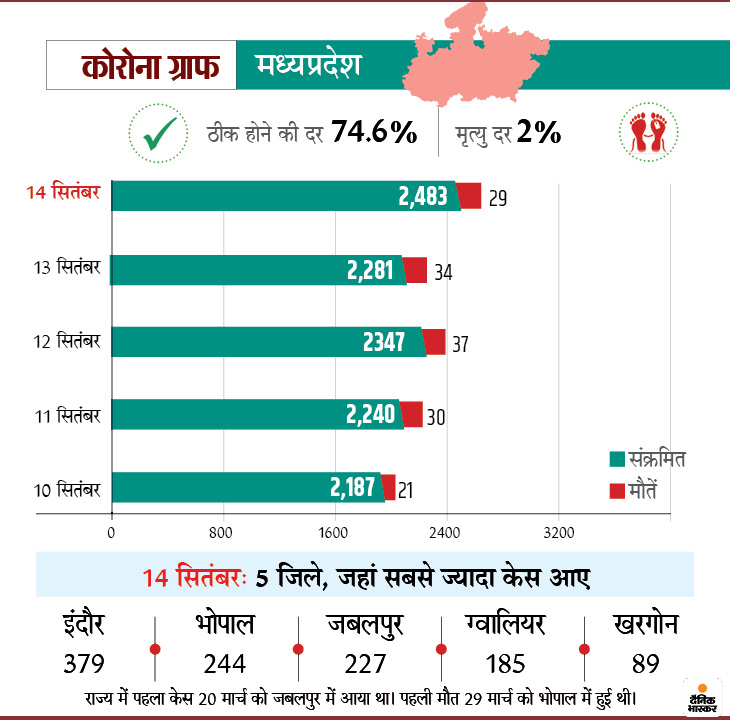 2. Rajasthan
On Monday, more than 1700 new corona infections were found in the state. 14 patients died. The dead include 2-2 in Jaipur, Ajmer, Bikaner and Jodhpur, while one patient each of Dholpur, Kota, Sikar, Jhalawar, Karauli and Udaipur. However, the report released by the Jodhpur local administration stated 9 deaths.

The death toll in the capital Jaipur has risen to 301. 24% of the state's deaths have taken place in Jaipur itself. In Jaipur hospitals, patients are not getting beds. Talking about Kovid testing, Jodhpur was ahead in May, June and July, but according to the data till September 14, Jaipur is ahead. 3. Bihar
The corona test of one lakh people took place on Monday in the state. However, this number is less than the test taking place in the last one week. Nevertheless, samples of 49.9 lakh people have been investigated in the state.
Meanwhile, in Patna district, 198 patients were found on Monday. The number of infected in the district has increased to 23924. Of these, 21882 patients have been cured. Currently there are 1944 active cases. The recovery rate has been reduced to 91%. 4. Maharashtra
On Monday, 17 thousand 66 new cases of corona were reported in the state, 15 thousand 789 were discharged and 257 deaths occurred. The total number of cases in the state has increased to 10 lakh 77 thousand 374. Of these, 7 lakh 55 thousand 850 people have been cured, while 2 lakh 91 thousand 256 patients are still being treated. 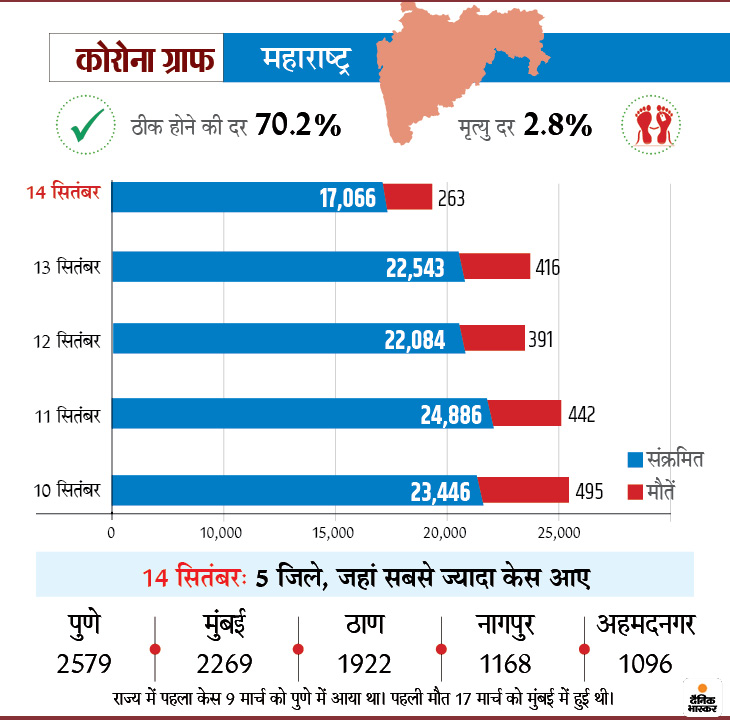 5.Uttar Pradesh
Kalyan Singh, a former BJP chief minister and senior BJP leader from Rajasthan, has been found to be Corona positive. His cook came to Corona positive three days ago. After this, the Health Department had also taken a sample of Kalyan Singh after initial symptoms, which has been reported positive. A total of 17 ministers have been infected in the state so far. 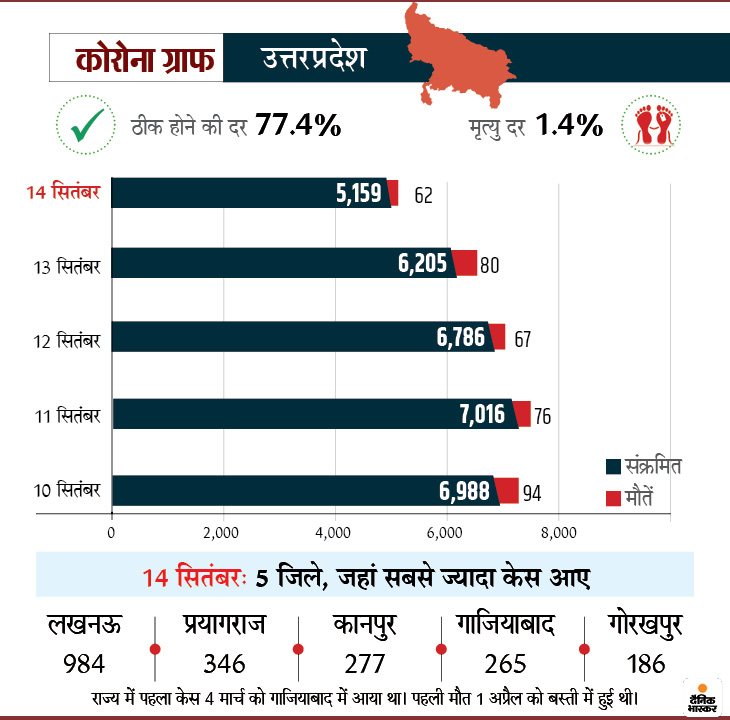