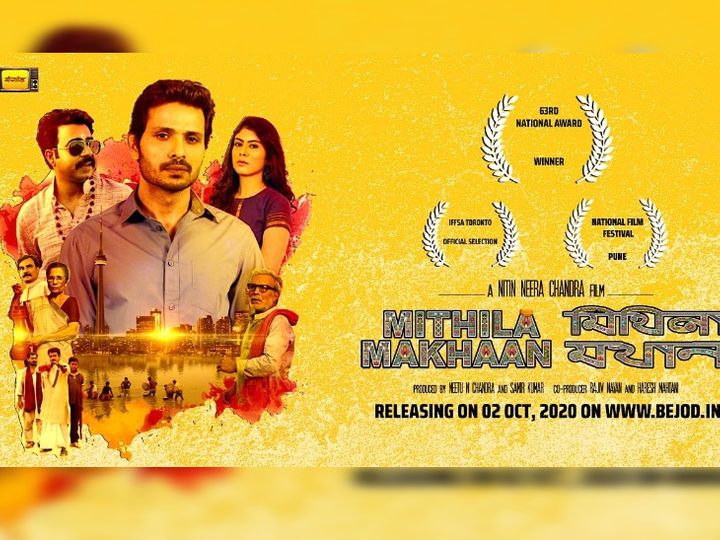 Director Nitin Chandra, who directed the mainstream Maithili film Mithila Makhan, has received the prestigious National Award. The film is being released on 2 October on Unmatched Cinema (digital streaming platform). Meanwhile, director Nitin Chandra has told stories of the challenging journey of the film's ideas, making and problems during shooting.

Director Nitin Chandra says, “The film was conceived during my visit to flood-hit areas of Bihar during 2008–2009. I made a documentary to understand this problem. Talking about the floods, he says, I felt and understood a reason for the heavy migration from Bihar. There was no livelihood at the ground level. There was a flood in North Bihar. I got the idea that how financially challenged people got jobs in their own village. It was the germ of the story that developed later and 5 – 6 years later I could make this film with the help of a Singaporean investor. I wrote the story in 2013 and started looking for money, but unfortunately no producer was found in my state. But I was lucky that producer Sameer Kumar came along and with some other resources I could make the film. “

The film was shot in Toronto in -35 degree

He further added, “Making this film was a huge challenge because we had to shoot in Toronto because we wanted winter but we didn't know that winter in Toronto meant temperatures of -35 to -10 on normal days. Happens. We somehow shot guerrillas in the streets of Toronto and inside their metro. Those 7 days in Toronto will be etched in my mind forever. I used to walk on roads where a mixture of white mud like snow on the side of the road it happens.”

“I am thankful to DOP Justin Chambers, who shot the film. The shooting scene in Niagara Falls was surreal. We came back from +45 to – 35 in the heat of Bihar in the month of May for further shooting. Such There was a story and there was no compromise with realism and what we wanted. So we shot for a total of 25 – 28 days from Toronto to India and parts of Nepal. “

Kranthi Prakash Jha and Anurita's Jha are the lead roles, Nitin says, “The casting was not easy again, especially for the female part. The male lead Kranti Prakash Jha worked with me in my previous film Deswa, so I cast him. It was obvious from the start to do but the woman was difficult. Anuraita's Jha did GOW and she was already known, but I still gave her a shot to meet, she liked the idea and everything went well. Pankaj Jha, who hails from that region, was a natural choice for negative leads. “

Mithila Makhan received the National Award. An excited Nitin feels, “The National Award is something that every filmmaker would like. The experience of receiving this National Award was a great pleasure, because the fact that my DVD arrived in Delhi's DFF office on the last day and I was not sure if it had arrived or not, but when I saw the results of the National Award in March Heard, then I was sure that it had reached his office and the rest is history. “

In the Sushant Rajput case, Narcotics Control Bureau could be interrogate many Bollywood celebrities and doctors in Drug Connection

In the Sushant Rajput case, Narcotics Control Bureau could be interrogate many Bollywood celebrities and doctors in Drug Connection