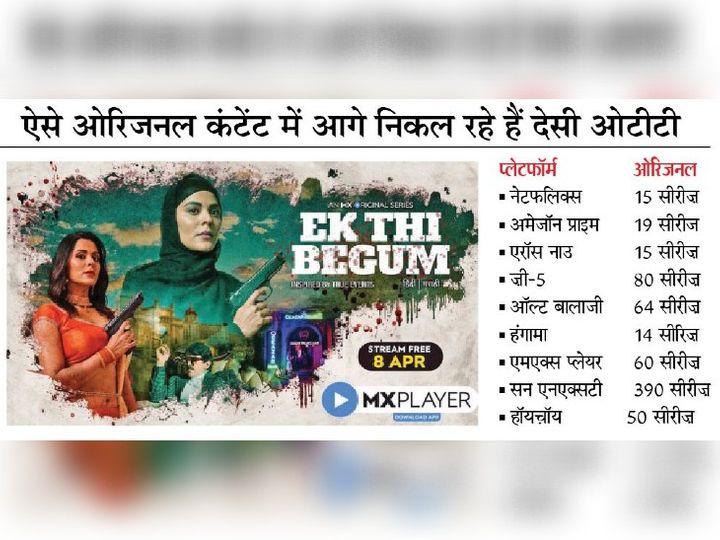 (Manisha Bhalla) Entertainment sector is growing rapidly in the country. The OTT industry is expected to grow at 45% by the year 2023. Corona has doubled this probability. However, earlier where foreign platforms like Amazon and Netflix dominated the country, now, Indian platforms are giving them a tough competition in terms of original content.

Some Indian OTT platforms are ahead of them. Dr. Sunita Kumar, Malaysia-based editor of Let'sOTTGlobal.com, states that there were 40 OTT platforms in India about a year and a half ago, but now the number has doubled to more than 80.

According to Siddharth Roy, COO of Indian OTT Platform Hungama Digital Media, one of the main reasons for the growth of the Indian OTT platform market is original content (original series). The market has grown further by serving content in regional languages. Work from Home has pushed the industry further because of Corona. A total of 66 per cent subscribers have risen during the Corona era on commotion. In which Tire-2 City grew by 65 per cent and Tier-3 City by 86 per cent.

This is how the competition between domestic and foreign
Film-OTT trade analyst Girish Wankhede explains, 'Road 2, Khuda Hafiz films, recently hit Disney Hotstar, Netflix's serial serial killer, Ghost Series was also criticized. The Penguin and Law viewers on Amazon Prime were rejected by the audience. At the same time, the original webseries 'Ek Thi Begum' and 'Ashram' on the Indian OTT platform MX Player set the record in a few days. There was also good content on the second OTT.