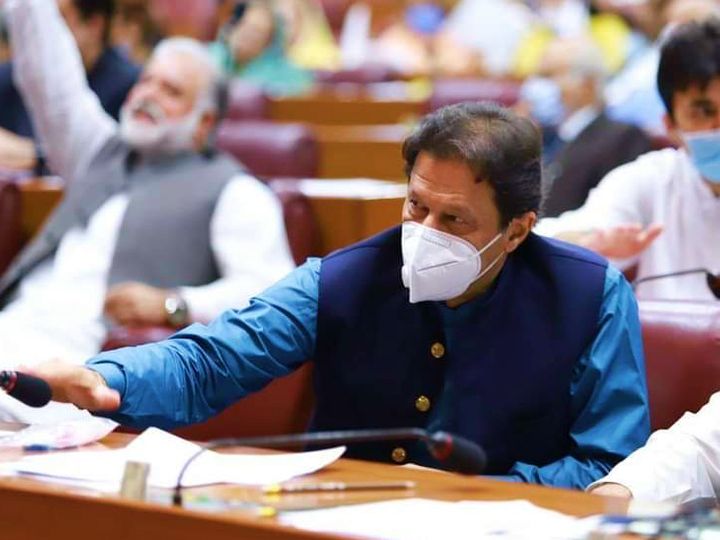 Imran Khan during the joint session of Pakistan's parliament on Wednesday. During this time, the government introduced three bills to come out of the gray list of FATF.

Pakistan has stepped up efforts to avoid being on the black list of the Financial Action Task Force (FATF). The next meeting of the FATF is to be held in October i.e. next month. Earlier, a joint session of the Parliament of Pakistan was called. Three bills were passed in it. Prime Minister Imran Khan said – Just as we have succeeded in the fight against Coronavirus, so will we succeed in coming out of the gray list of FATF.

Imran claimed that Pakistan also overtook India and Europe in the fight against Corona.

Thanks to colleagues
Imran thanked allied parties for passing all the three bills in Parliament. Said- This day will always be remembered in the history of Pakistan. We have proved that when it comes to the country, we stand together on a platform. Because, the country is first for all.

Opposition did not support
While presenting the bill, Imran said- I hope that the opposition will support the government to come out of the gray list of FATF. But, he proved that he is thinking only about himself. He does not want the country to move forward. We introduced three bills to save the country. They are being opposed. There is a conspiracy to blackmail the government, but it is not going to succeed. It has introduced 34 amendments. It is not possible to believe them.

What is in these three bills
The FATF has put in strict conditions to exclude Pakistan from the gray list. The three bills passed are like this. Islamabad Capital Territory Waqf Properties Bill, Anti Money Laundering Bill 2020 and Anti Terrorism Bill 2020. The purpose of the first bill is to monitor the properties of Waqf Boards. Their misuse should be prevented.

Haryana PGIMS Doctor Commits Suicide, His Wife and Two Daughter Jumps from Building in Rohtak | The doctor took poison by eating poison; On discovering this, the wife jumped into the water tank with 2 daughters; One daughter lives