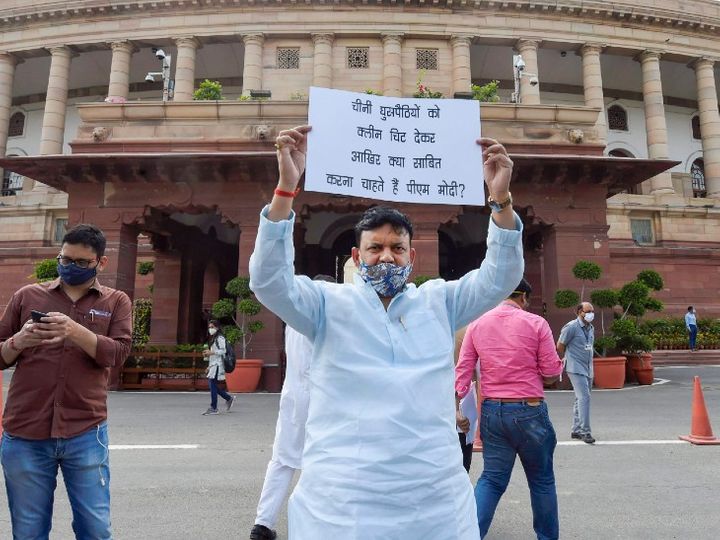 The Congress is demanding a debate on the issue of China. The Congress MP demonstrated outside Parliament to flank this demand. The Congress also had a walkout from the Lok Sabha on Tuesday.

Today is the third day of the first session of Parliament (monsoon) between Corona. Defense Minister Rajnath Singh will make a statement in the Rajya Sabha today on the India-China border dispute. The proceedings of the house will begin at 9 o'clock. Earlier on Tuesday, Rajnath also spoke in the Lok Sabha on the boundary dispute. On the other hand, on the issue of migrants, the government said that there was a stampede among the workers due to the fake news in the lockdown.

What happened on the second day of the monsoon session?

Defense Minister said- China has ammunition on LAC, we are also ready
Rajnath gave information in the Lok Sabha about the ongoing tension on the Line of Actual Control (LAC). He said, “As of now, China has amassed a large amount of troops and ammunition in the interiors adjoining LAC and Arunachal. On the northern and southern banks of Lake Gogra, Kongka La, Pangong So in eastern Ladakh. There are many tense areas. Our forces are also deployed in these areas with complete readiness for retaliation. “

However, the opposition is demanding a debate on the issue of border dispute. The Congress also had a walkout from the Lok Sabha on Tuesday, accusing it of not being given a chance to speak. Congress MP Anand Sharma has also given a short duration notice for discussion in the Rajya Sabha on the issue of Chinese incursions.

Home Ministry said – Rumors had caused a stampede among the migrants
In response to a question on the first day of the monsoon session i.e. on Monday, the government said that there is no data on how many migrant laborers were killed in accidents while returning home in lockdown. In response to a second question related to migrants, on Tuesday, it said that during the lockdown in March, a large number of migrants had moved due to fake news.

Trinamool Congress MP Mala Roy had asked in writing in the Lok Sabha, what steps did the government take to protect migrants and forced thousands of laborers to return to their homes before the lockdown was announced on March 25? To this, Minister of State for Home Nityanand Rai replied that due to fake news, there was a panic in the minds of people about the supply of food and other essential facilities, hence the stampede.

Bollywood's drug dispute also reached parliament
The drug controversy in Bollywood is now changing in the big debate in Parliament due to the death of actor Sushant Singh Rajput. BJP MP Ravi Kishan on Monday said in the Lok Sabha that the screws of drugs have been tightened in the film industry. On this, SP MP in the Rajya Sabha Jaya Bachchan said on Tuesday, “Some people associated with Bollywood should not pierce the plate that fills their stomach.”