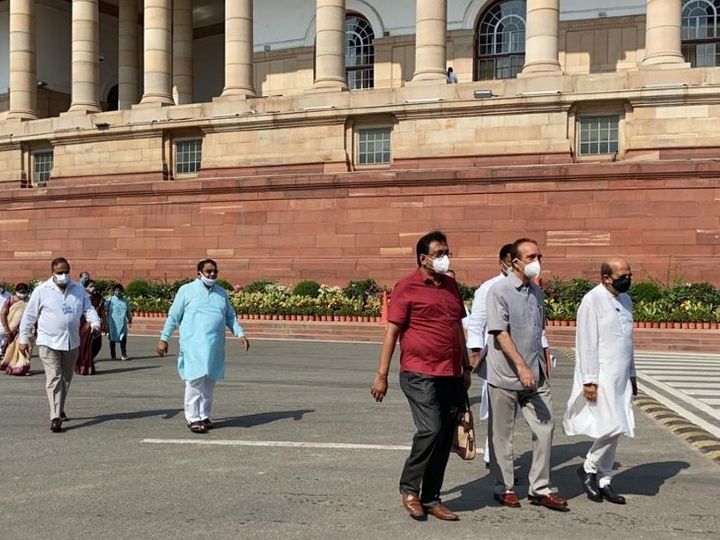 The opposition has also demanded that the suspension of 8 MPs be withdrawn. Rajya Sabha Chairman Venkaiah Naidu on Monday suspended the opposition MPs for the entire session.

The Congress and other opposition parties have boycotted the Rajya Sabha in protest against the agricultural bills. Congress MP Ghulam Nabi Azad said, “The government should put in place a system whereby no private buyer can buy produce from farmers below MSP. We will buy the Parliament session till such a bill is brought.” Azad has also demanded that the suspension of 8 MPs be withdrawn.

Venkaiah Naidu said – not happy with the suspension of MPs
Rajya Sabha Chairman Venkaiah Naidu suspended the 8 opposition MPs who created uproar in the House on agriculture bills on Sunday till the proceedings of the entire session. These MPs sat on a dharna in the Parliament complex overnight, the strike is still going on. Venkaiah Naidu said today, “Due to the behavior of the MPs, action was taken against them. We are not against any member. I am not happy even with the action of their suspension.”

Government raises MSP of rabi crops amidst uproar over agricultural bills
Amid opposition to the agricultural bills, the Center has increased MSP of 6 rabi crops by 6% in September, ahead of time for the first time. The MSP of wheat has been increased by Rs 50 to Rs 1975 per quintal. During the Lok Sabha proceedings, Agriculture Minister Narendra Singh Tomar said on Monday that this decision has been taken by the Cabinet Committee on Economic Affairs.

On the other hand, 18 opposition parties, including the Congress, wrote a letter to President Ram Nath Kovind and appealed not to sign the agricultural bills. On the other hand, demonstrations against agricultural bills in the country have also intensified. Farmer organizations in Punjab, Haryana and Uttar Pradesh have spoken of farmer curfew on 25 September. The farmers of Rajasthan will decide on September 23 on joining it. However, all 247 Krishi Mandis were closed on Monday in the state.