Positive News: Loudspeaker Classes in Maharashtra Village for Students – Diganta Swaraj Foundation Director Rahul Dinkar Tiwrekar | Speakers teachers come to teach those who do not have smartphone-internet facility, this speaking school is running in 35 villages of Maharashtra 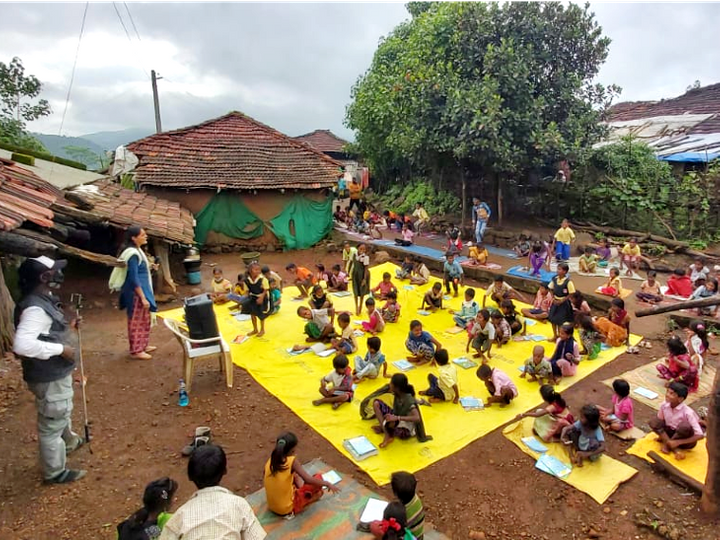 'Bolta School' has been started in 35 villages of Jawhar and Mokhada tehsils of Palghar district. So far, around 1200 children in these villages have benefited from this.

Due to Corona, the country was under lockdown and now the country is also being unlocked. Almost everything has been opened in the fourth unlock. Schools are not open only. The study has been done online. But there is also a section here, for which teaching children online is like a dream. In Maharashtra, such children are being taught with loudspeakers. Children have started calling this new teacher a 'speaker teacher'.

'Bolta School' has been started in 35 villages of Jawhar and Mokhada tehsils of Palghar district. Till now around 1200 children from these villages have joined it. It has been started by Diganta Swaraj Foundation. The director of the foundation, Rahul Tivrekar, said that in lockdown, we used to come to give food and medicines in this tribal dominated area. During this time many people were worried about their children's education. We did not have enough resources to arrange smartphones and internet for them. At the same time, the idea came up that why not teach through mic and loudspeaker. '

School runs two and a half hours every morning

The 'Speaker Teacher' comes to teach children from first to eighth at eight in the morning. Classes run for two and a half hours every day. According to the syllabus, with help from Digant Swaraj Foundation School Teachers get the study material recorded. In the morning, the volunteers of the Foundation visit these villages and teach the course with Bluetooth speaker in an open space.

Rahul says that initially there were fewer children. Gradually, children's interest grew. Now many children are coming to study. An assistant is also present during this entire study. Children can question them if they don't understand anything. Or you can reverse the audio to listen again.

Idea started being adopted in other districts

Rahul says that after the success of this 'Bolta School' many voluntary organizations from other districts contacted us. Currently, similar schools are running different organizations in many villages of Nashik and Satara districts. Even in the slums of many cities including Mumbai, this school is being sought. Rahul says that we are also trying to reach more and more children speaking schools.