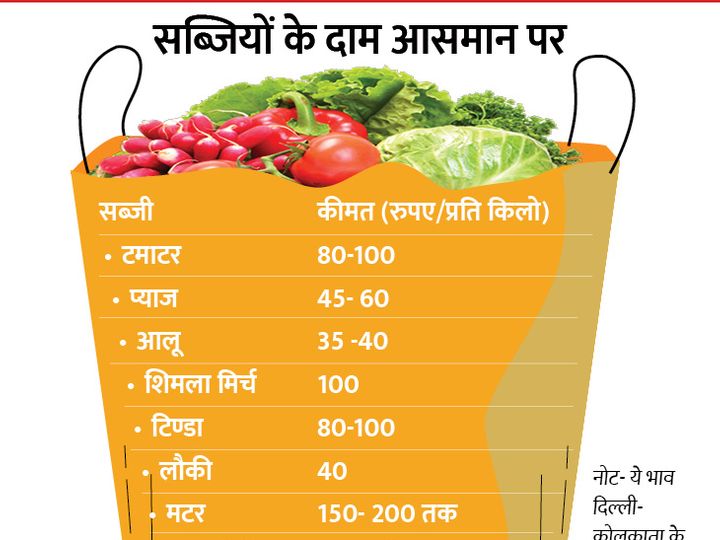 Onion is currently being sold at a price of 60 to 80 rupees per kg in retail in many areas including Delhi.

Vegetable prices have doubled in the last one week. Tomatoes, onions, potatoes and other green vegetables are disappearing from people's plate. As such, green vegetables are expensive every year in the rainy season. But this time the price of potato, tomato and onion has increased further.

The price of onion has reached Rs 40-45 in wholesale price at Azadpur Mandi, Delhi, the biggest fruit and vegetable market in the country. The same was getting 15-20 rupees per kg a week ago. Azadpur Mandi chairman Adil Ahmad Khan said that for two weeks only the rate of tomatoes and other green vegetables was seen increasing, but at this time prices of onions have increased. Onion is currently being sold at a price of 60 to 80 rupees per kg in retail in many cities including Delhi.

Reason for increase in onion prices

Rajiv Kumar, a businessman at Azadpur Mandi, said that crop failure is due to the rise in onion prices. In fact, from Karnataka, Andhra, Madhya Pradesh and Maharashtra, kharif onion produce currently comes in the market. But, due to heavy rains in all these states, 50 percent of the crop was damaged. Also, heavy rains have also affected the quality of old onion stocks in Maharashtra. Their prices have started increasing.

Price of onion makes you cry every year

Explain that onion is sown in both Rabi and Kharif. In Maharashtra, Gujarat, Karnataka, these crops are ready by May and November. Apart from this, in Madhya Pradesh, Andhra, Rajasthan, Uttar Pradesh and Bengal, this crop is grown back and forth. Every year, measures are taken to prevent onion prices from rising. Onion exports are banned, onion stocks are banned. Government agencies start selling onions at cheaper prices. Despite this, onion keeps the general public crying. However, in view of the rising prices, the government has banned the export of onions. Now prices are expected to soften.

The export ban is a good decision, says Rajendra Sharma, general secretary of Azadpur Mandi Potato-Onion Merchant Association. This will put an end to the increase in onion prices. Due to the onion crop deterioration in South India, there is a supply shortage crisis, so the government should consider import along with ban on export.

Talking about tomato rate, tomatoes have reached beyond Rs 80 in Delhi's Azadpur mandi to Ghazipur mandi. Tomatoes have reached 80 to 100 rupees per kg in vegetable markets of Mumbai. In Kolkata, tomato prices have crossed Rs 100. The prices of all green vegetables have increased in these cities. Similarly, at present, potatoes are getting Rs 26 per kg in bulk and Rs 35-40 per kg in retail. Last week, the wholesale price of potato was Rs 15 per kg.

Tomato was getting 50 rupees till a few days ago.

Vegetable seller Rajiv Saw of Ghazipur mandi told that at this time vegetable gold prices are being received. Tomato was 50-60 rupees kg 10 days ago but today it has become 80 rupees. If the rates will increase in 10 days, how will the common man eat vegetables? He told that the prices of vegetables are increasing in a wild way. That's why people are buying less vegetables. Explain that there has been a huge decrease in demand for vegetables in Ghazipur mandi.

Talking about the mandis of Kolkata, Delhi and Mumbai, the prices of green vegetables have doubled in the last one month. Beans were purchased last month at a price of 27 rupees, but this month the price of beans has reached around 40. At the same time, brinjal in the market was sold at the rate of 16 rupees at the time of 8 rupees per month. However, the price of brinjal in retail is around 25-30 rupees. Today, capsicum is sold in the market at a price of Rs. 36 per kg. Gourd is getting 10 rupees kg in wholesale and 20 to 25 rupees kg in retail. Last month, the bottle gourd was sold for Rs 5-7 per kg.

Why the difference in the prices of vegetables in the market and market?

Adil Ahmad explains that despite the vegetable being cheaper in the market, retail traders have to sell it at an expensive rate. There are many reasons behind this. Firstly, at this time, they have to deal with many problems in the movement to and from Mandi. After that special care is taken of cleanliness. Also, depending on the area, vegetables are sold at an arbitrary rate in view of demand. Let us know that tomatoes are being sold in Delhi for 60 to 80 rupees per kg in terms of quality and area.

A vegetable trader in Krishna Nagar Mandi told that if one more rain falls, the vegetable will become more expensive. He told that prices of potato and onion along with tomato will also go up further. Azadpur mandi businessman Adil said that the rate of vegetables is likely to increase by October. However, the rate will come down from November. Adil said that most of the green vegetables have become spoiled due to rain, but the prices of green vegetables have increased due to high demand in the market.