Roman script has spoiled the condition of Hindi and digital era has taken over the language, the rate of Hindi speakers has increased in five decades | Hindi grew by 18% in four decades, Bengali, Marathi and Telugu languages ​​declined; Know why Hindi is increasing in the country 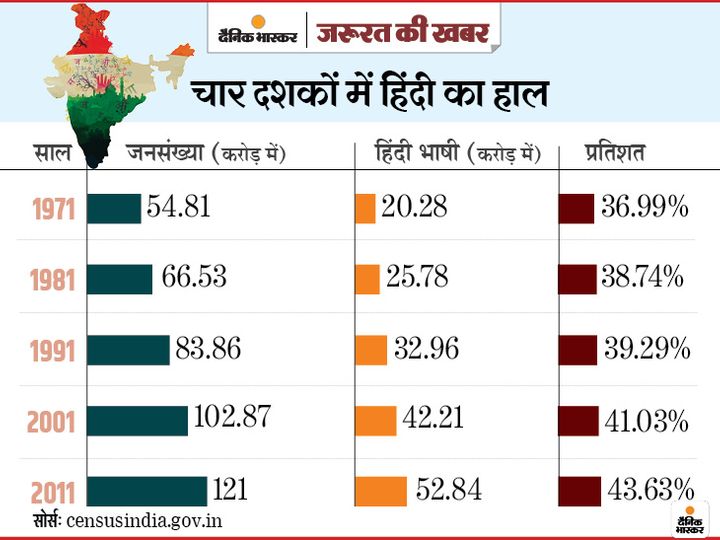 14 September, ie Hindi speaking festival. Today is also the birthday of businessman Rajendra Singh, who has made a big contribution in making Hindi the official language. On this day 71 years ago, Hindi written in Devanagari script was recognized as the official language of the country.

Today, even after so many years, the dominance of Hindi continues in India. In the last four decades, Hindi speakers have increased by about 17.95 per cent, while the number of speakers of other languages, including Bengali, Marathi and Telugu, has steadily fallen. In 12 states and union territories of India, Hindi is used as the first language for conversation.

The language census data even shows that in Uttar Pradesh, Delhi, Uttarakhand and Himachal Pradesh the number of Hindi speakers is more than 96%. Despite this, the language of higher education, national media, judiciary-bureaucracy and corporate office in India remains English.

According to BBC, the reason for this is that India has no national language like its neighboring China. Whereas, Hindi is the official language of the Central Government. Experts also talk about making Hindi the national language. We took their views from experts to know the condition and direction of Hindi in India. 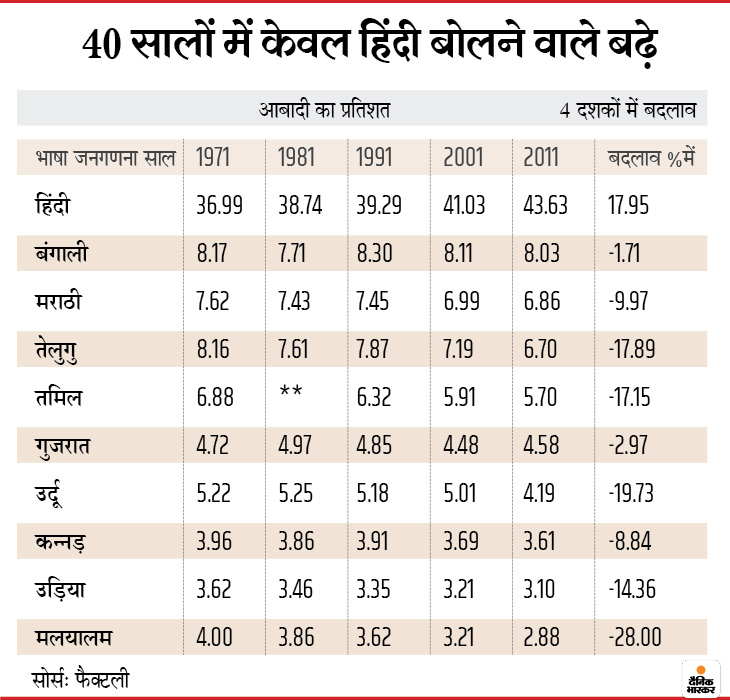 Is Hindi really strong?
Professor Chandan Kumar in the Hindi Department of Delhi University says that the condition of Hindi in India is very good. According to the language census 2011, 52 crore 83 lakh 47 thousand 193 people speak Hindi in the country. Of these, the number of men is 27 crore 66 lakh 10 thousand 187, while Hindi speaking women are 25 crore 17 lakh 37 thousand 006. In 2001, there were 42 crore 20 lakh 48 thousand 642 speakers of Hindi.

Chandan explains, “In non-Hindi speaking areas of the country like South India, Hindi was strongly opposed, but there has come a new generation, which is practical about Hindi. Hindi has become the language of its employment. People whose older generations Hindi He has grown up in opposition to Hindi, he is also now speaking Hindi. If he survives Hindi, the country will also survive. Hindi is getting stronger, country is becoming stronger. “

Is Hindi not getting full respect in India?
Principal of Delhi-based Hansraj College, Dr. Rama wrote in his article that today Hindi is the third largest language in terms of speakers all over the world, but it is struggling in its country. Dr. Rama explains Macaulay's education policy as the reason for the growing English influence in India.

In 2019, a report by Statista states that Hindi is the third most spoken language after English and Chinese (Mendorian) language. She writes that some people made English a necessary language of India, so that they could slavery to the British. The British filled the hearts of the youth of India with a bad feeling about their own language.

However, she considers the new education policy as a step to support Hindi. According to the census, in 2001 the number of English speakers in India was 2 lakh 26 thousand 449, while in 2011 census the figure reached 2 lakh 59 thousand 678. 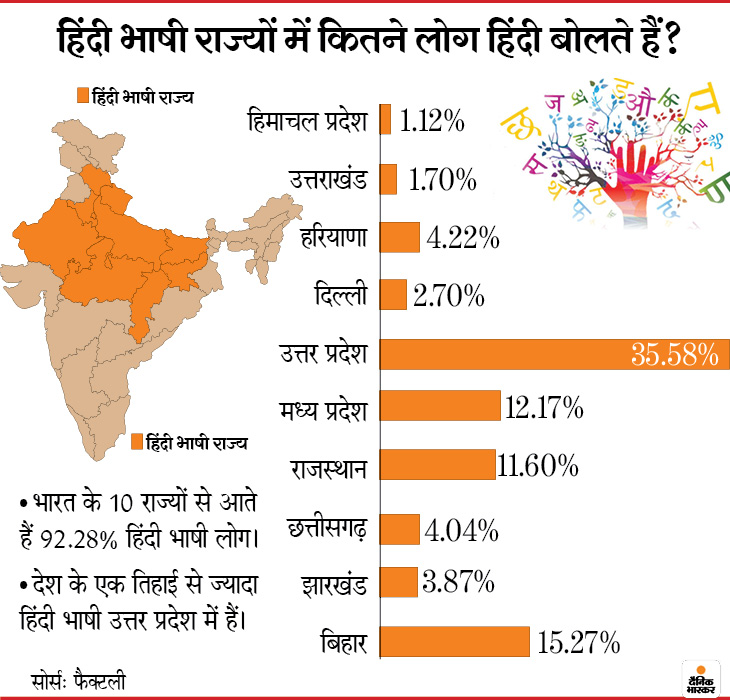 Professor Chandan Kumar explains that information media and social networking sites have given Hindi a way from India to the Middle East. Now go to any country in the world. Especially in countries where technology is more. There you will find a middle class of Hindi, whose home language is Hindi.

According to a news published in Financial Express in 2019, the reading of Hindi books has increased rapidly in the last 10 years. In an interview given to the website, publisher of Hindi books Shailesh Bharatwasi explains that “This is due to e-commerce reaching only in rural areas. Earlier there was no system to distribute Hindi books. There was a problem in reaching the readers. . “

Dr. Rakhi Tiwari, head of journalism department at Makhanlal Chaturvedi National Journalism and Communication University, says that the use of Hindi in digital mediums has increased tremendously and is quite good. We should worry about implementing Hindi, not its declining status. The possibilities of development of Hindi are quite high in the digital era. 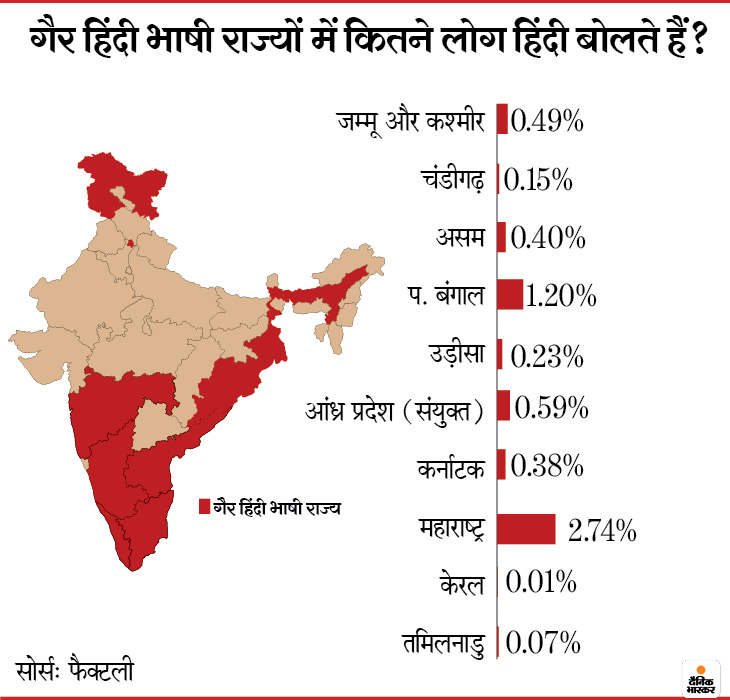 Is the roman script causing harm to Hindi?
Dr. Upendra Hindi, a former journalist and editor at Pant Agricultural University, says that Hindi is getting worse due to more use of Roman script than Devanagari. Hindi in Korean and Devanagari script are the most accurate languages ​​in the world, because what is written in both languages ​​is spoken.

Apart from this, Dr. Upendra also attributed the poor condition of Hindi to writing Hindi on social media and not having digital script development. Doctor Upendra says that due to less knowledge of IT experts, we are lagging behind the development of digital script systems from English and French as well as Korean Hebrew and Arabic speakers.

How will the situation of Hindi improve
According to Professor Chandan Kumar, we have to encourage translation. This is understood to mean the Hindi-English translation, while the translation has to be converted to the Indian language. We have to write good Hindi books in the fields of engineering, medicine, social science and other knowledge. Teachers of Hindi have to know about technology.

Doctor Rakhi Tiwari tells that we should use Hindi more and more at office, home or among friends. Along with this, easy Hindi should also find a place in government papers. Apart from this, there should be continuous competition in educational institutions on difficult words of Hindi.