Not only India's Sensex and Nifty-50, but also the Dow Jones Industrial Index and S&P 500 Index of America are returning to their old levels within 6 months after falling by 37%.

On the other hand, the price of gold considered safe haven asset seems to be declining. After reaching 56 thousand rupees per ten grams on August 7, gold is continuously slipping. So far, it has come down to five-six thousand rupees.

However, analysts are saying that the reason for the fall in gold prices is not just in the stock market. There are many other reasons as well. In such a situation, if you feel that with the boom in the stock market, gold will become cheaper, then your guess can also be wrong.

How many stock markets have fallen, what is the situation now?

Coronavirus cases began to appear in February. Till then governments had not taken it seriously. But in countries like America, the impact of growing cases was also seen on the stock markets. The stock markets, which were at their alltime highs in February, slipped after February 14. Most stock markets around the world touched the bottom between March 20 and 23. 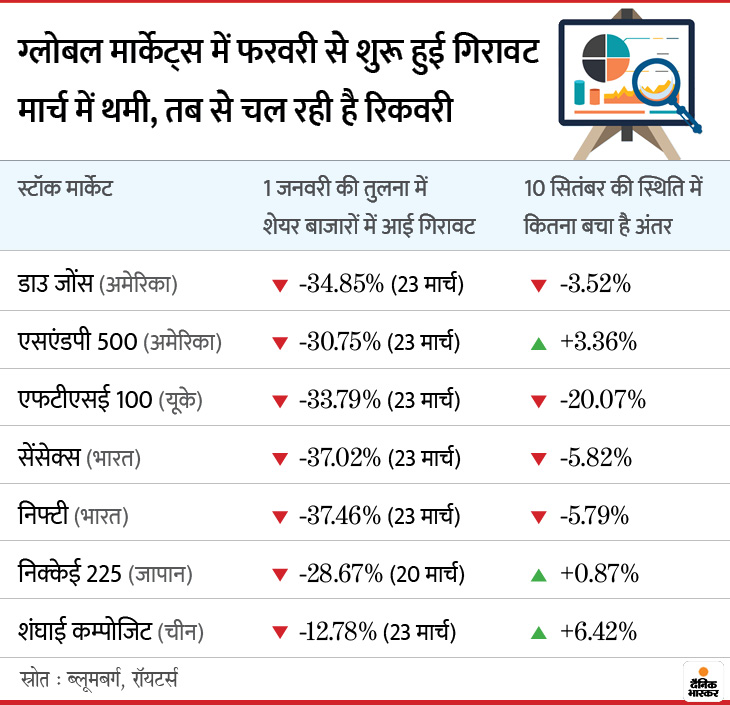 What caused the rise in the stock markets?

When Coronavirus created an atmosphere of uncertainty, governments were also active to stop the market decline. In India too, the central government announced a package of 20 lakh crore rupees. Similarly, the Stimulus measures in other countries, including the US, gave hope to falling markets.

The Reserve Bank in India announced a loan moratorium. Decreased interest rates. Ajay Kedia, director and head of research at Kedia Capital, says the Stimulus package served as a steroid for the stock markets. The rapid growth that this has caused, cannot be called natural fast. Markets started falling when the Corona epidemic hit India.

Now that India has become the number two country in the world, then the markets are coming up. You yourself can understand that if the situation in Corona does not improve, then the government will have to bring the Stimulus package again. Whose buzz has started. This will bring liquidity in the market, but it cannot be claimed that the Corona crisis has averted and now everything is going to be good in the market. 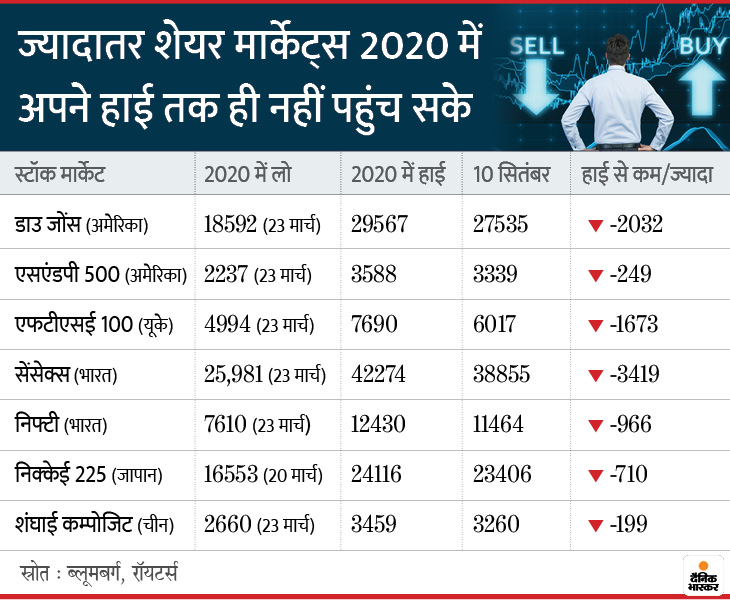 So was this the reason for the rise of gold?

According to the report of Angel Brokerage, the Sensex and Nifty have registered an annual average growth of 9.05% and 8.5% in the last 10 years. Between 2010 and 2015, growth was also seen after the 2012 recession. If you see the growth of SENSEX from February 2016 to February 2020, it has increased to 40,000 points from 17,500. It is clear that despite the risk, the trend of investment in equity has increased.

Similar is the relationship between stock market and gold. Whenever the stock market declines or a downturn occurs, the yellow metal speeds up. Global consulting firm Deloitte said in an April outlook that interest rates would fall. So did happen.

Today, not only in the country but in the whole world, the bank's interest rates are the lowest in a decade. Talking of India as of today, the repo rate is only around 4 percent. Interest rates are low, so gold remains a better investment option for people. 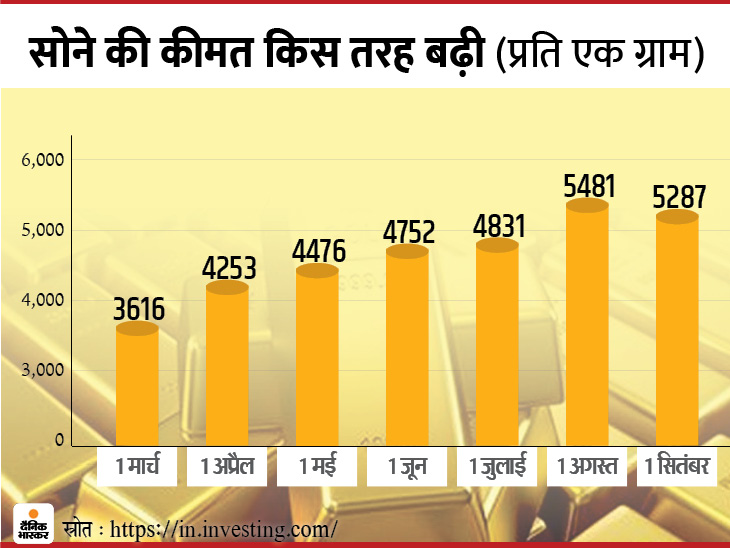 What next… Is investing in gold still an attractive option?

Ajay Kedia of Kedia Capital says that growth in gold occurs in cycles. Bicycle from 2008 to 2013 or from 2018 to now. Gold rates have not increased suddenly. It started picking up from September 2018. If you understand the period from 2008 to 2013, you will find that the situation today is not very different.

Interest rates were reduced. There was a risk of recession, so governments had declared Stimulus packages. Geo-political tension was in the US, Iran and the Middle East at that time, today India-China, America-China and America-Iran are visible. It is all favorite for gold.

He said that the economy was at a standstill because of the Kovid-19. Here we have gone into negative GDP only. If you are an investor, where would you like to invest? You have only two options – equity and gold. As of August, FIIs have invested $ 5,500 million in India.

This indicates that expectations from India have increased. At the same time, if you try to understand the mindset of Indians, then they find gold as an attractive option. In our place, people invest in gold only when its prices rise. A simple example of this is the increasing investment in Gold Sovereign Bonds.

He says that the fall in gold prices is due to the strengthening of the rupee in the last two months. The rupee is currently in the range of 73-74 rupees per dollar. 76-77 per dollar reached a few months ago. This has also reduced the price of gold.

But, it can also be understood that if the dollar increases, then in the long term, the price of gold will increase more rapidly. That is, gold can reach 60 to 70 thousand rupees per ten grams by next year.

Tags: DBExplainerStock markets are recovering even after falling by 37%; But gold does not return at last year
Previous Post