The most ambitious dream of the Telangana government is about to come true. The construction of the Yadadri Lakshmi-Narsingh Swamy temple in Telangana is nearly 90% complete as compared to Tirupati Balaji in Andhra Pradesh. Construction is still going on around the temple. Its launch is likely to be announced in September itself. In 2016, Chief Minister K.K. Chandrasekhar Rao started work on a plan to build a temple similar to that of Tirupati for Telangana, as Tirupati did not come to Telangana's part when it was separated from Andhra.

The Yadadri temple of mythological importance is being given a grand appearance at a cost of Rs 1800 crore. All the gopura (gates) and walls of the temple will be mounted with 39 kg of gold and about 1753 tonnes of silver. It will be the largest temple made of granite stone in India. It has 2.5 lakh tons of granite stone. The Telangana government had earlier launched its plan in March 2020, but it has been delayed due to Corona. The Chief Minister himself will tell the date of the launch of the temple.

It is also called Yadadrigirigutta Temple. The temple area in Yadadri Bhuvanagiri district, about 60 km from Hyderabad, was around 9 acres, 1900 acres of land was acquired for its expansion at Rs 300 crore. Engineers and architects worked on around 1500 maps and plans for this, out of which its design was finalized. The design has been designed by Hyderabad-based architect and South Indian film art director Anand Sai. 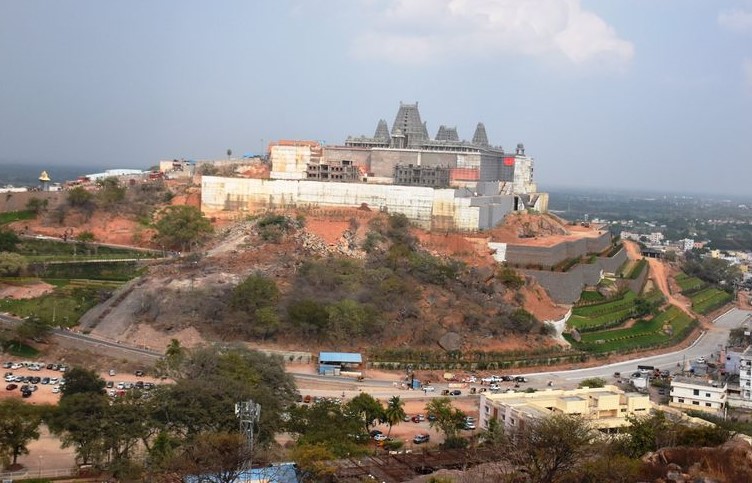 The Yadadri temple is present on the hill. The tall gopura (gate) of the temple can be seen from far away.

The temple is mentioned in Skanda Purana

The Yadadri temple finds mention in the Skandha Purana. There is a legend that Yad Rishi, son of Maharishi Rishyasringa, did penance here to please Lord Vishnu. Pleased with his tenacity, Vishnu appeared in the form of Narasimha. On the prayer of Maharishi Yad, Lord Narasimha got here in three forms. The only Dhyanastha mythological Narasimha statue in the world is in this temple. 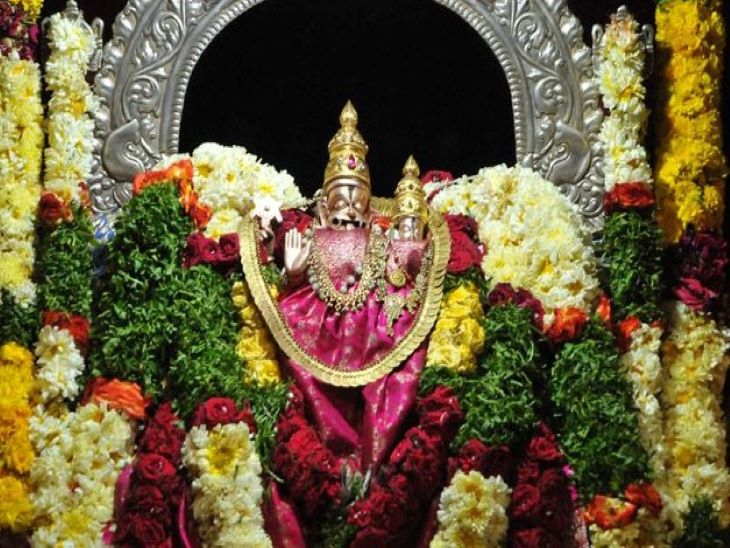 The main statue of Lakshmi-Narsingh present in the temple.

Three statues of Narasimha are present in the cave
Three idols of Lord Narsih are in a cave. Along with this, Goddess Lakshmi is also there. Around 12 feet high and 30 feet tall, Jwala Narsih, Gandabhiranda Narsingh and Yogananda Narsingh statues are installed in this cave. Its reconstruction began under the guidance of Vaishnava saint Chinna Jiyar Swami. The construction is being done on the principles of Agam, Vastu and Pancharatha scriptures, which are well recognized in South India. 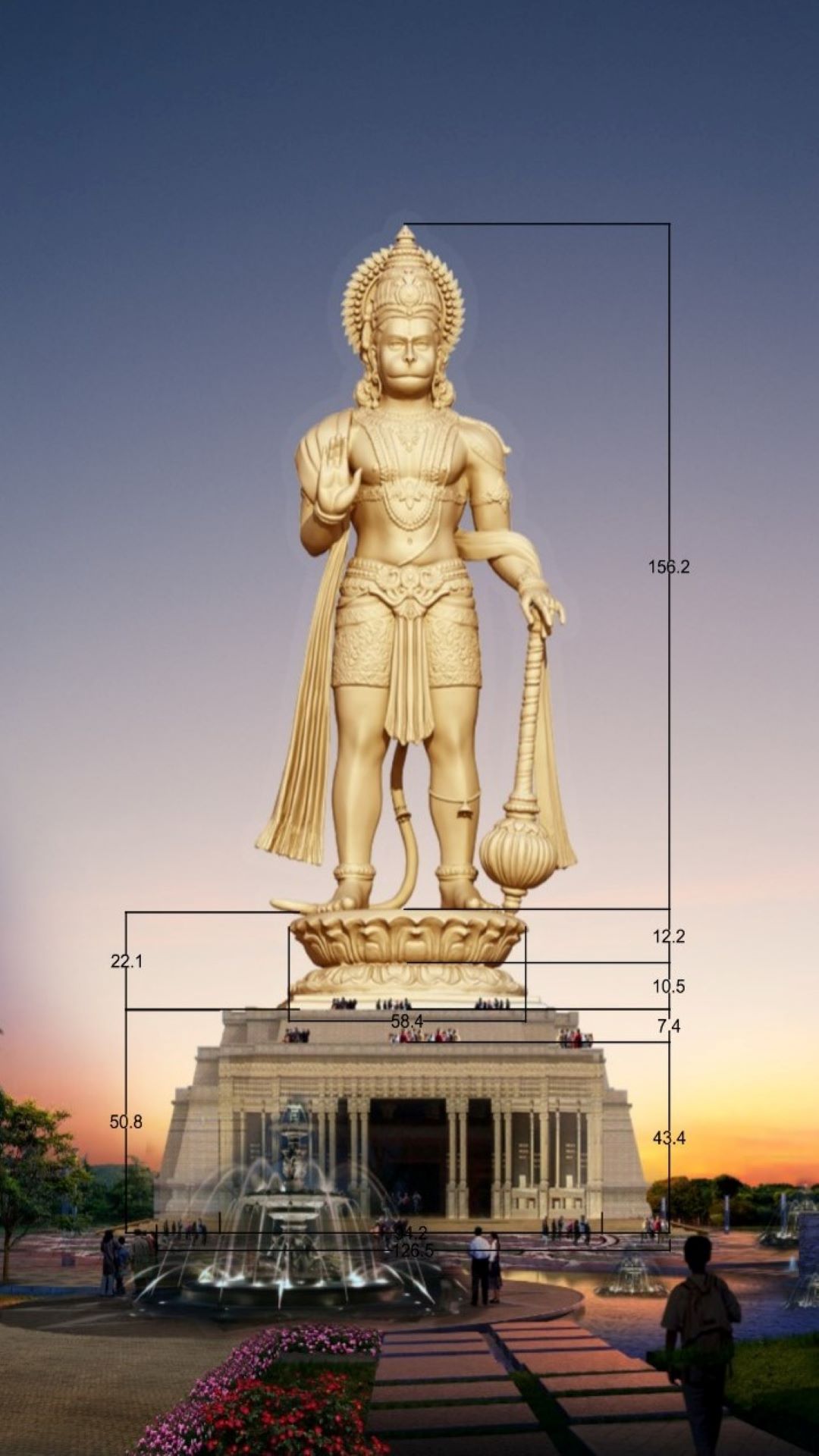 Design of Hanuman statue outside the temple. This statue will be seen from many km away. (The height given in the design is in feet.)

156 feet high copper Hanuman statue
A standing statue of Lord Hanuman is being constructed at the entrance of Yadadri temple area. There is a temple of Hanuman along with Lakshmi-Narsingh in this temple. Because of this Hanuman is considered the main guard deity of the temple. This statue is being erected on a stand of about 25 feet, it will be seen from many kilometers away. The grandeur of the temple will be known to the tourists from the height of this statue. 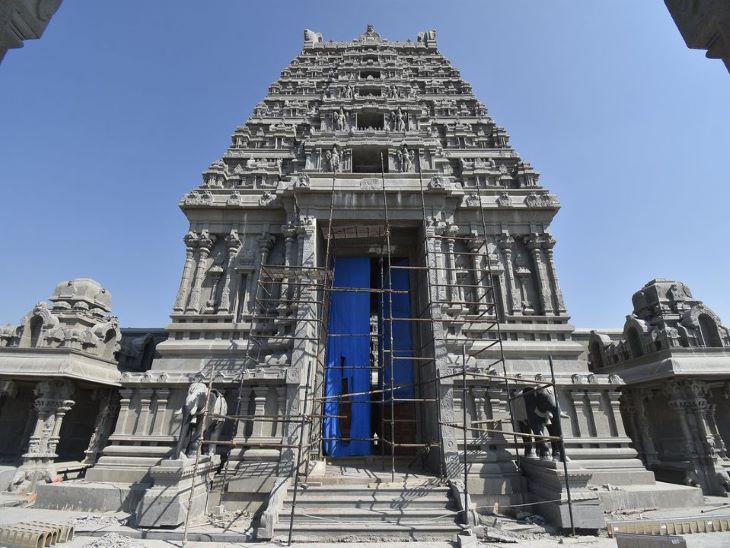 This is the main entrance to the temple. The temple has a total of 6 gates.

Laddu Prasadam Complex Like Tirupati
Like Tirupati, Laddu Prasadam will be found in the Yadadri temple. A separate complex is being prepared for this, where arrangements will be made from laddu prasadam to packing. 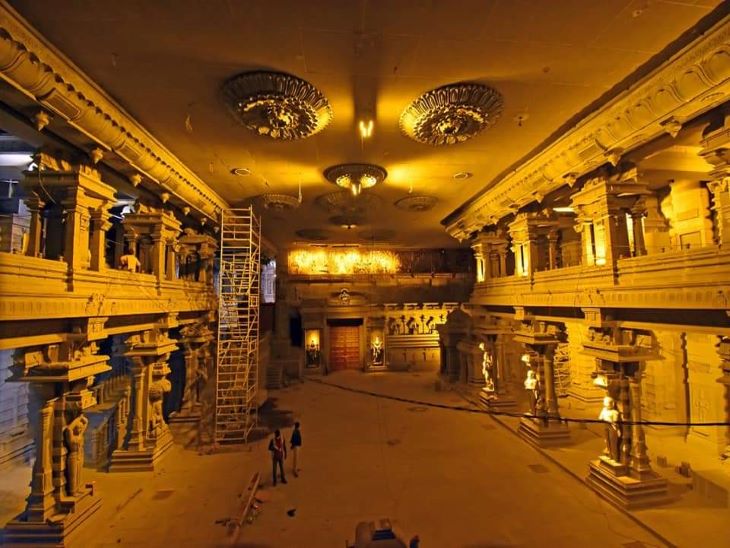 Lighting and final touching work are currently underway inside the temple. In this hall, devotees will reach the main cave of the temple. 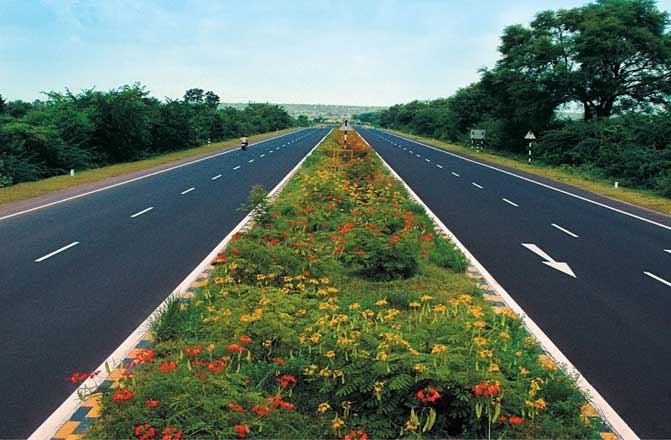 Fourlane roads are being built for the temple from all major cities so that travelers coming from any direction will not have any problem in reaching the temple.

All facilities from VIP villa to Yatri Niwas

It will take care of facilities ranging from ordinary passengers to VIPs. Different guest houses have been constructed for the passengers. 15 villas have also been built under VIP arrangement. There will also be a parking facility of 200 cars at a time.

The price of this 2 selfie camera phone is not much! You will get Total 6 cameras and 4500mAh battery. launch-review – News in Hindi