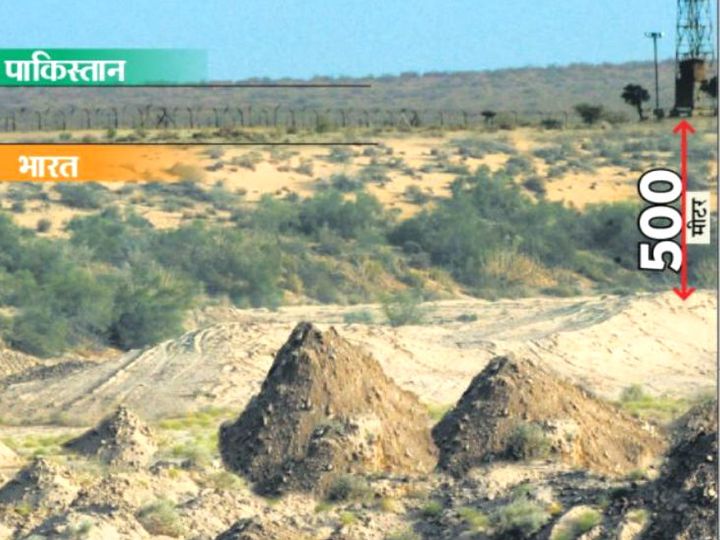 This picture is between Satpal and Annawali outposts in Bikaner district, adjacent to Indo-Pak border.

(Anand Chaudhary). The mining mafia on the Rajasthan border poses a major threat to the security of the country. For gypsum, the mafia has dug up the border in Bikaner's Kolayat, Khajuwala, Bajju, Pugal and Dantore areas in about 70 km.

Gypsum is used in plaster of paris and chemical fertilizers. There are 30-40 places in these areas, where the mining mafia has reached close to 500 meters of the barrage. Not only this, 30 to 40 feet deep pits have been made near the border.

Through them, the security of the country can be challenged by making tunnel easily. Due to this fear, BSF wrote a letter to the administration demanding immediate stop illegal mining here. The BSF feared that terrorists might come to the country's border by digging tunnels under the guise of laborers engaged in mining. This area is very important from a strategic point of view. Because of this, the Border Security Force is facing difficulties in monitoring.

Why become the enemies of the border, know 3 big reasons
1. Border mining
According to the guidelines of the National Green Tribunal, mining work cannot be done within the radius of 10 km of a wildlife sanctuary area, but only one km from the border connected to the security of the country. Mining leases are being allocated at a distance of. Under this, mining work is being done just 500-700 meters away from the border.

2. Only 2 meters cleared, dug up to 7 meters
In 2016-17, 201 mining leases were released in Khajwala, Dantore, Bhursar, Bajju, Pugal area bordering Bikaner. Of these, 152 started mining. The mines are on a 20-year lease. One and a half to two meters of excavation is allowed, but digging up to 5-7 meters of land. Mining leases were given to local account holders, but excavations are being carried out by mining mafia in Haryana and other parts of Rajasthan.

BSF worried: We told the government several times, but action is not being taken
BSF IG (Works) Amit Lodha said that the case of gypsum mining in Kolayat and Khajuwala is in the know. Many have complained to the state government in this regard, but no action was taken. Illegal mining is a big challenge for security.

These villages are more affected
In Bikaner illegal mining is taking place near the border in Bajju's 21 BSM and 22 BSM, Aguri Paytan, Dantore 10 BSM, 20 BSM, Kabrewala, Bhuraasar, Kayamwala and Musewala.

Mining Department: There have been complaints of gypsum mining, will stop it soon
Superintendent mining engineer of Bikaner Circle NK Bairwa said, there have been complaints of gypsum mining near the border in Dantore area. We have campaigned to stop this together with BSF. We will soon be able to stop it completely. Meanwhile, Bikaner Circle mining engineer Ram Niwas Mangal told that action would be taken if any illegal mining is happening on the border. Mining boards in Dantour were released much earlier. We will get the matter investigated.

Kalbe Javvad Writes Letter to PM Modi and Says We Are Ready to Fight With China. – Shia religious leader wrote to PM Modi, said – Our community is ready to sacrifice lives in the war with China