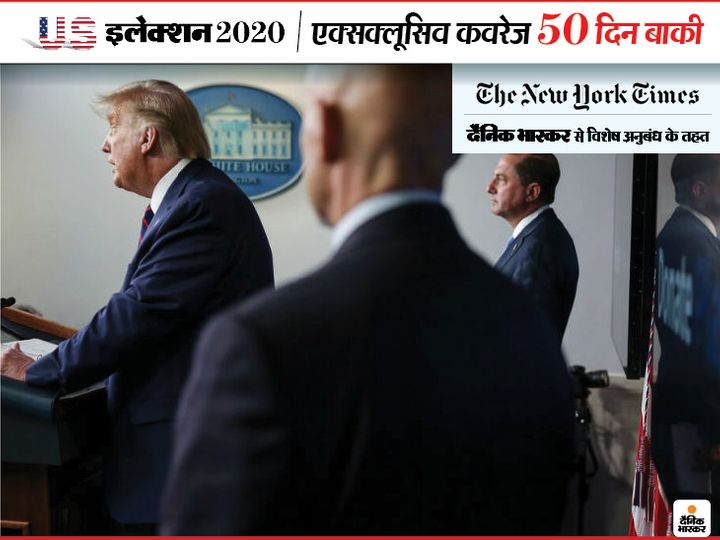 It is claimed that Trump's phone call to Dr. Francis Collins, the head of the National Institutes of Health, was a White House pressure campaign. This was done to impose its will on the government health agencies of the country.

It was the third week of August. The Republican Convention had just a few days left. President Donald Trump was furious about it. At the same time, White House officials were concerned about how to show that the country has taken the next step to fight the Corona epidemic.

For this, blood plasma ie the blood of cured patients had to be approved for use in sick patients. Approval of its use in Emergency was stuck for about two weeks. The National Institutes of Health (NIH) had concerns about its effectiveness.

So on August 19, Trump called Dr. Francis Collins, director of the NIH. He gave a small message to get this work done by Friday. This could not happen until Friday. As of Sunday, the regulators of the Food and Administration Department could not complete the last-minute data review to address the NIH's doubts.

What was the pressure campaign of the White House?
However, on the occasion of the convention, the President announced approval from the FDA for plasma therapy. He said that it can now be used on a large scale. This will reduce deaths by 35%. Trump's phone call to Collins was a White House pressure campaign. This was done to impose its will on the government health agencies of the country.

Scientists fear to pressurize vaccine
By approving plasma therapy, the White House wanted to show that the epidemic that killed 1,92,000 people in the country has progressed in the fight. It was a moment after which US scientists and regulators associated with the Department of Public Health began to feel that Trump could put pressure to bring the vaccine before the election. They can ask for the vaccine to be effective and to be cleared without testing its safety criteria.

They spoke to reporters in the briefing room. Amidst all this, Dr. Collins and Dr. Peter Marks kept looking at everything helplessly. Dr. Peter is one of the FDA's top regulators who are responsible for the process of approving the vaccine and for not allowing any interference in it.

White House Offers Plasma Treatment
White House officials exaggerated the talk of effective plasma treatment. Since then, discussions about this therapy started, which continued for the next several days. Collins left the White House after the announcement.

However, Mark, who cleared the plasma, was taken to the Oval Office. He was taken there to introduce Trump and some of his senior colleagues. Trump was out there celebrating the cupcakes and white icing with others.

NIH director introduced to Trump celebrating
Mark said in an interview the day after he was approved that he was a little surprised by the president thanking him for approving the plasma. However, he did say that he met Trump for a short time. Such a short visit did not make sense.

When many health officials heard these things, they said that they began to fear that the link connecting politics and science has become weak. All this has happened at a time when the public is already worried that political pressure is being created in the assessment of vaccine and treatment.

At the same time, from the other side there is a President who does not have respect for science. He is hurt by his political failure to stop Coronavirus. They are trying to show that they are determined to give the Corona vaccine and medicine to the people of America as soon as possible.

It may be difficult to get the vaccine approved.
Government scientists and pharmaceutical companies have started taking steps to prevent compromising people's safety for political gains. They are publicly saying that they will be honest in taking decisions related to science to fight the corona epidemic.

FDA Commissioner Dr. Stephen Hahn has said that the vaccine will be approved through an advisory committee of external experts. This will make this process more stringent than before. New guidelines can also be introduced for the standards of using the vaccine in emergency.