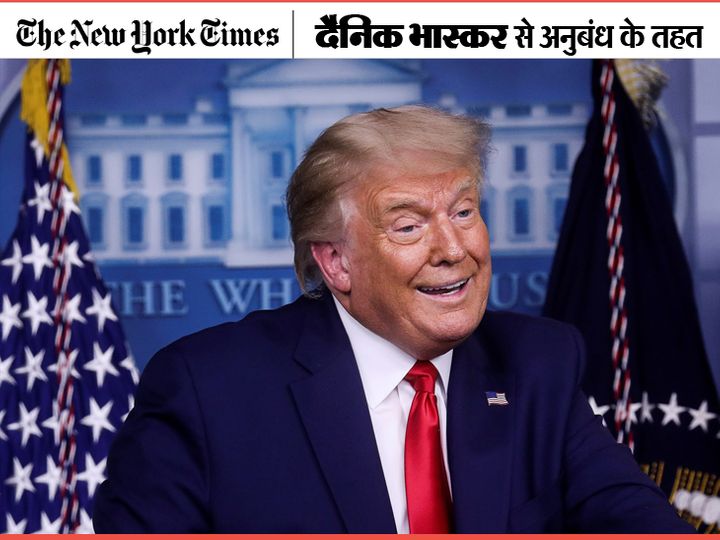 Donald Trump interacting with the media at the White House on Wednesday. President Trump has claimed several times that the Corona vaccine will be launched in three or four weeks. His claim has been rejected by his own advisor.

Robert Redfield, director of the US Center for Disease Control and Prevention (CDC), said that wearing a mask is more effective than a vaccine. However, President Donald Trump does not agree with the argument of the country's largest health officer. Trump offered a new look at the mask on Wednesday night. In any case, the mask cannot prove more effective than the vaccine.

Trump has rarely been seen wearing a mask. Initially, he compared Corona to the flu. Differences between Redfield and Trump are also clearly visible on the issue of the Corona vaccine being available in the US.

How the matter started
The case actually started on Wednesday morning. The CDC chief appeared before a Senate committee to answer questions related to the prevention of coronavirus and vaccine. Later said in a conversation with the media- I want to clear two things. First, the vaccine will reach all Americans in the middle of next year. Second, the mask is more effective than the vaccine.

What did trump say
Whatever the reason may be. However, Trump did not digest Redfield's plea. A few hours later, speaking to the media, said – I saw his statement. He called and talked. I asked him – what do you want to say? I think the CDC Chief has made a mistake. I do not agree at all that masks are more effective than vaccines. How could this happen. Masks may be helpful in preventing infection. However, the vaccine is the best solution.

Trump claims – Robert has accepted that the vaccine is more effective than a mask. And he was misinterpreted. Its meanings were removed incorrectly.

Discussion on vaccine therefore
When Redfield appeared before the Senate Committee, he said – Even if the Aj vaccine comes, it will take 6 to 9 months to reach all Americans. The special thing is that Advisor Doctor Anthony Fauci on Trump's Coronavirus has said the same thing many times. But, the President does not agree to it, that is, he dismisses the advice of his own advisor. According to Redfield – the infection can be controlled in a few months through a mask. Provided it is worn correctly.

Trump's election worries
There is a presidential election on 3 November. Trump is more concerned about this. The reason is simple – Democrats are bringing the government's failure on the candidate coronavirus to the public. In response, Trump has claimed several times that the vaccine will be available before the election. Experts are rejecting his claim. Trump is upset with the FDA. Because, this organization says that vaccines will not come in the market until all types of safety approvals are received.

That is, Trump is making a false promise
FDA Chief Stephen Han said last week – new glycines have been released for the vaccine. It is necessary to use them fully only then it can be brought into the market soon. On the other hand, Trump said- I think we will get the vaccine very soon. It will reach every American. All this will happen in three or four weeks. There are seven weeks left in the election.

Biden caught a weak nerve
Biden knows that Trump may be surrounded by the issue of coronavirus prevention and the vaccine. On Wednesday, he said – political pressure is being created to launch the vaccine soon. President Trump wants to take political advantage of it. However, it should be noted that it should not be related to politics. Science should be allowed to run according to science.

The world's largest 'heritage museum' after Athens to be built in the birthplace of the Prime Minister; Modi will pay the debt of the birthplace | 7-storey below the ground, a museum will be built like Athens' famous Acropolis, 200 crores. Will cost

Bihar Election 2020 Nda Will Announce About Seat Sharing In One Week After Meeting Between Jdu Ljp Bjp Hum – Bihar Election: NDA, BJP-JDU to announce seats in a week

Bihar Election 2020 Nda Will Announce About Seat Sharing In One Week After Meeting Between Jdu Ljp Bjp Hum - Bihar Election: NDA, BJP-JDU to announce seats in a week