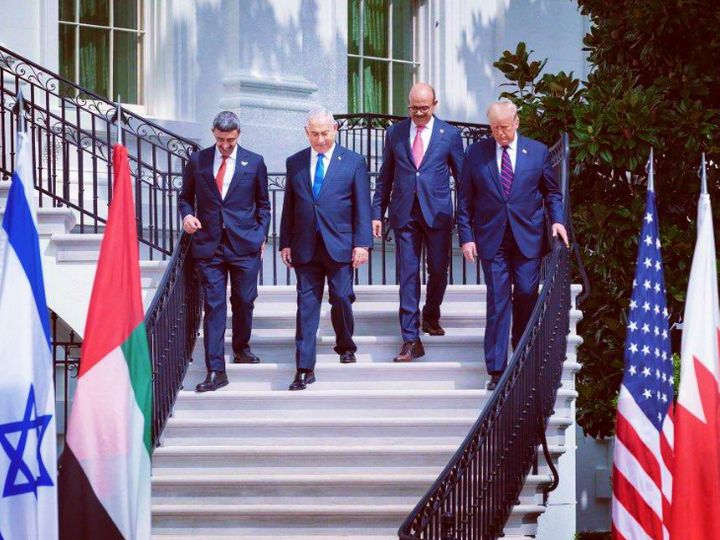 The historic diplomatic agreement was signed between Israel, the UAE and Bahrain on Tuesday evening at the Oval Office of the White House. US President Donald Trump and other leaders coming down from office after the deal.

Israel has entered into a historic agreement with the two Gulf countries UAE and Bahrain. It was signed in the presence of US President Donald Trump on Tuesday. The event took place at the White House. Israel's formal diplomatic relations with both Arab countries will begin. The US has played the most important role in this agreement.

After the deal, Trump said – this is a new and excellent start. Very soon, five or six Arab countries will enter into similar agreements. Trump's gesture is believed to be towards Saudi Arabia and Oman.

Fresh start in middle-east
The relations between Arab countries and Israel were extremely bad for several decades. Both sides continued to consider each other as a threat. Diplomatically also given the status of enemy country. Now Trump's efforts have paid off. A peace deal was signed between Israel and the UAE last month. Bahrain has also been added to it. The most significant aspect of the agreement reached on Tuesday is the start of diplomatic missions between the three countries. Put simply, Bahrain and the UAE will now begin diplomatic relations with Israel.

What does agreement mean
According to media reports, a framework will be ready by next month. With this, the three countries will decide the name of the ambassador and the rest of the staff. Then this list will be sent to each other. Work will start after the approval of the Ministry of External Affairs. Arab countries are very excited about two things. First- Business and second- Defense. The US will play the role of a mediator. All three countries will be able to do business with each other. Israel needs markets and technology to these two countries of the Middle East. That is, the deal will be of benefit for both.

Trump gesture
Trump made a big sign after the agreement. It has special meaning in diplomatic world. Trump said- wait. Soon five or six Arabs will enter into such agreements with the country and Israel. According to media reports, the US is now in contact with Saudi Arabia and Oman. Soon both these countries can also start a diplomatic relationship with Israel. In such a situation, Muslim countries can be divided into two parts. Turkey and Pakistan are against this agreement.