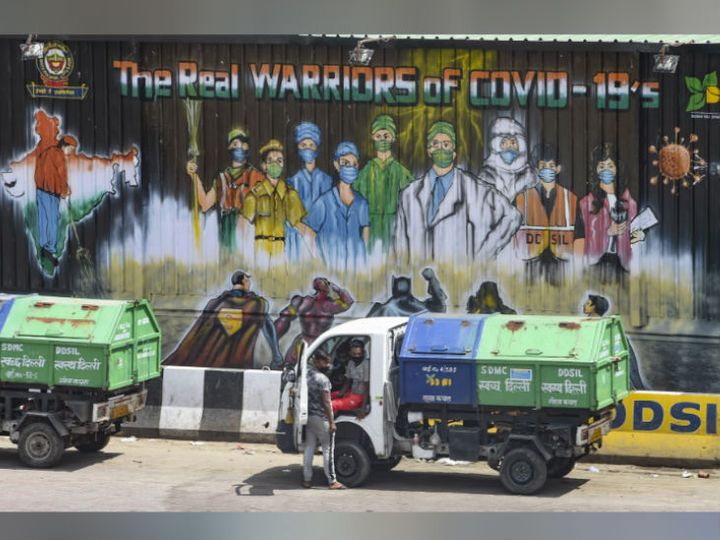 His paintings were painted on the wall displaying frontline workers fighting against Corona in New Delhi.

In India, two lakh deaths from Corona can be prevented by December 1 by using masks and adopting social distancing. At the same time, if the lockdown is relaxed then about 5 lakh people can die. This is revealed in a study. This report suggests that the disease will continue to be a threat to public health for a long time.

The study has been done by the University of Washington's Institute for Health Metrics and Evaluation (IHME) in the US. Accordingly, we have an opportunity to further limit deaths from corona in India. This report highlights the needs of people to use masks, adhere to social distancing and other restrictions. As advised by public health officials.

Masks go a long way in reducing the spread of virus

IHME director Christopher Murray said the epidemic in India was on the rise. The large population is still in danger of being hit. Wearing masks and social distancing will go a long way in reducing the spread of the virus. Our study shows that the impact of the epidemic depends on the actions and decisions of the government and individuals doing today, tomorrow and in the near future.

Reacting to the findings of this study, Gautam Menon, Professor of Department of Physics and Biology at Ashoka University, Haryana, said that it is absolutely true that the wearing of masks and measures of social distancing has slowed down the epidemic to a great extent.

He said- My first thought is that since December the transition figures from the IHME model had been estimated to be above 60 lakh every day. If nothing happened, it was expected to cause around 5 lakh deaths every day.

However, he noted that there are fewer cases than the model estimates. According to this model, the infection was expected to reach the peak by 15 December.

India succeeded to a great extent on the epidemic

Researchers at IHME said that India's response to the prevention of corona has also led to considerable success. Citing the example of some urban areas, including Delhi, he said that by mandating things like contact tracing, mass testing, wearing masks and social distancing, it has helped reduce the spread of the virus.

His modeling study found that if good conditions prevail, India could have a total of 2,91,145 deaths by December 1. It also said that by the end of August, there will be more than 60 thousand deaths in Des. According to the study, if the lockdown ban is relaxed and masks are not used, a total of 4,92,380 deaths could occur in India by 1 December.

More than 10 thousand deaths in Maharashtra

If the epidemic progresses, by then 13 states will have a total of over 10,000 deaths. At present, Maharashtra is the only state which has already crossed this figure. Murray said the deaths would be higher if hospitals in those states did not have facilities for corona patients. It will also have an impact on the economy there.

The risk of an epidemic rising until the vaccine arrives

Researchers said that until the corona vaccine is not widely available, most of India's population is likely to be vulnerable. The researchers said that monitoring trends in every state, encouraging the use of masks, social distancing and sanitation awareness can reduce the impact of the epidemic on India's health and economy.

Hulas Kheda is a witness to the Indus period civilization, here is the Mahabharati Barsi Mahadev Temple

Hulas Kheda is a witness to the Indus period civilization, here is the Mahabharati Barsi Mahadev Temple