Dawood Ibrahim's involvement in Kerala gold smuggling has been revealed. Dawood is absconding from India after the 1993 Mumbai blasts. -File photo

The strings of Kerala gold smuggling are connecting to the underworld. The National Investigation Agency (NIA) suspects the contact of the accused has been gangster Dawood Ibrahim. The agency said this in a written reply submitted to the Kochi NIA court on Wednesday. The agency submitted this reply opposing the bail plea filed on behalf of the accused Rameez Katie and Sarfuddin. The court also requested not to grant bail.

The case of gold smuggling came to light on 5 July. A diplomatic baggage was caught by the officers of the Customs Department. The baggage was shipped from the UAE. It was opened after receiving permission from the Ministry of External Affairs. After investigation, 30 kg of gold worth about Rs 15 crore was found in the baggage. The NIA has also accused some others, including Swapna Suresh and Sandeep Nair, in the case.

'The accused went to the shops selling guns in Tanzania'

The NIA said in court, “Both the accused had traveled to Tanzania. Went to shops selling guns from African countries there. Rameez tried to get a diamond business license in Tanzania. He later arrived in the UAE. Smuggled gold from there to Kerala. Dawood Ibrahim's D'Gang is active in both Tanzania and Dubai. The case of D-Company in Tanzania sees Feroze Oasis, a South Indian man. We suspect that the accused Rameez is linked to D-Company. “

On Wednesday, two accused Swapna Suresh and Sandeep Nair withdrew the bail plea in the gold smuggling case. Swapna Suresh used to work at Kerala State Information Technology Infrastructure Limited (KSITL). It comes under the IT department, which is under the CM of Kerala. He has been fired from his job after smuggling his name. She has also been a former UAE Commerce Officer. At the same time, Sarit Kumar worked as a Public Relations Officer (PRO) in the office of the UAE Consulate in Thiruvananthapuram. He was arrested on July 6.

Rameez was arrested in November 2019

Rameez, an accused of gold smuggling, was arrested in November 2019. He was arrested for smuggling rifles of 13.22 mm bore. Gold smuggling continued at the time of his arrest. The NIA told the court that they also have a picture of the accused Sarfuddin, in which he is seen holding a rifle in Tanzania.

There has been criticism of Kerala government in this matter

The Kerala government is criticizing the matter. The investigation of the first case was initiated by the Customs Department. Sarit Kumar, who arrived at the consulate to claim gold, was detained. Inquiries were made. Some officials of the state had its strings attached. The name of Chief Minister Pinarayi Vijayan's Principal Secretary IS Adhikar M Shivshankar was revealed. After this, he was removed from the post by the Chief Minister. Later the Ministry of External Affairs had approved handing over the investigation to the NIA. Meanwhile, on Wednesday, the Kerala High Court ordered the Enforcement Directorate not to arrest Shivshankar till 23 October.

Joint team of RAW, NIA and CBI should investigate

The Congress said in July that the wires in this case are connected to other countries. Hence, RAW (Research and Analysis Wing), an intelligence agency that collects information abroad for India, should also be involved in the investigation. Leader of the Opposition in Kerala Legislative Assembly Ramesh Chennithala had said – The present government of Kerala has brought the state into disrepute worldwide. We demand that a joint team of RAW, NIA and CBI should investigate this matter. The Congress-led UDF alliance had also staged an online sit-in over its demand. 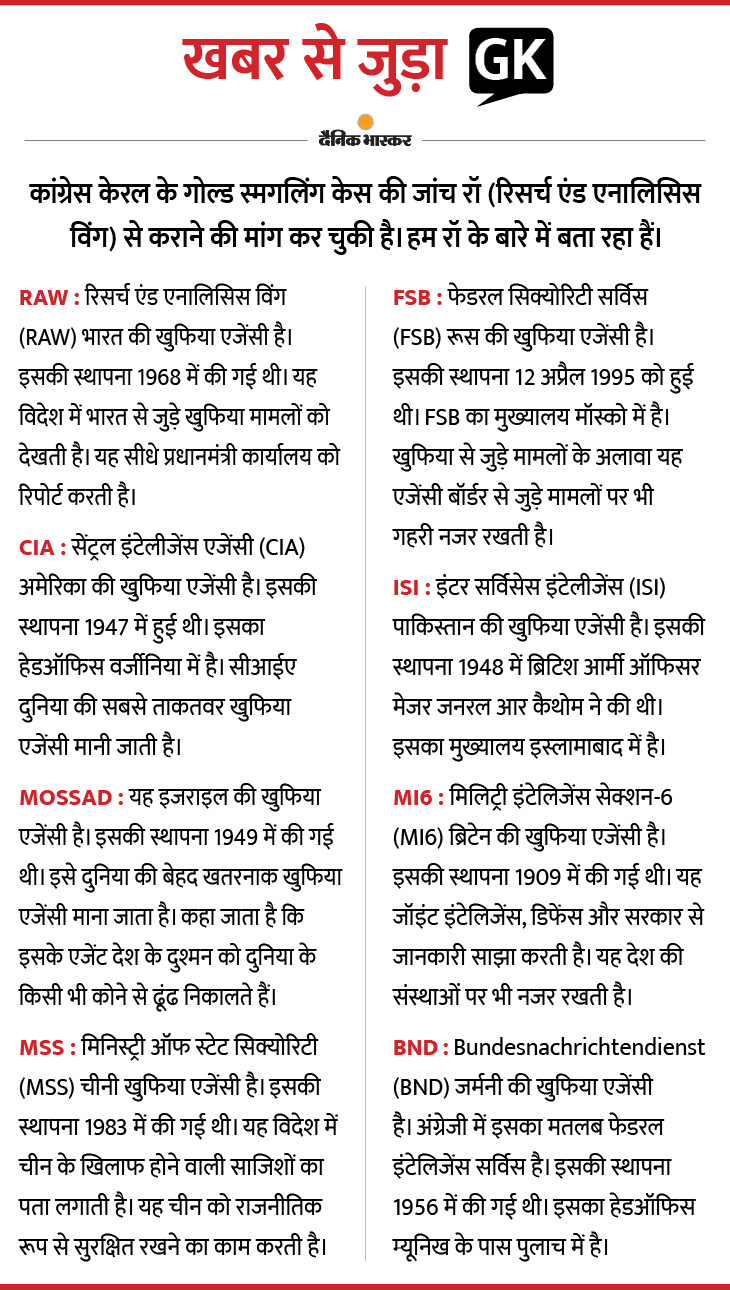