Bihar Election Result 2020 Social Media Reaction Today Updated; Top Memes, Photos by Twitterati | After sharing the photo of Munna Bhaiya of Mirzapur, the supporter wrote – distribute sweets, there is an atmosphere of happiness. 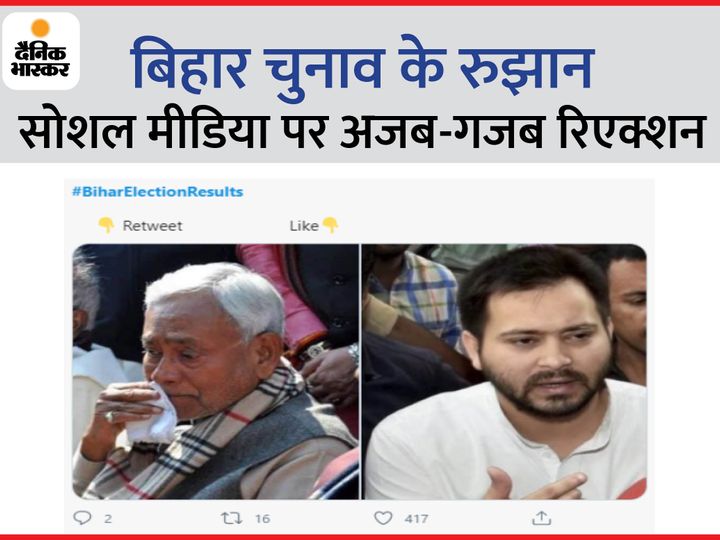 Counting of votes continues in Bihar elections. The trends are going on in the Grand Alliance and the NDA. Meanwhile #BiharElectionResults is trending on social media. Based on the initial trends, supporters of all parties are also claiming their party's victory on social media and pulling the legs of the opposing parties.

Elections in India and EVM on social media is not hot, it cannot happen. As soon as the NDA got ahead of the Grand Alliance in trends, EVMs on social media started forming.

9 AM: Mahagathbandhan is sweeping Bihar

NDA continues to lead in trends. Now BJP supporters are sharing a photo of Munna Bhaiya of the web series Mirzapur, writing, “There is an atmosphere of happiness, distribute sweets.”

When social media starts sharing mim on any issue, then there is definitely a mim of Pakistani cricket supporter going viral in the World Cup. NDA supporters share this meme and are pulling the leg of coalition supporters.

After the results of the election, there is talk of horse-trading. A user shared a photo of a van on Twitter and wrote that Early Trends #BiharElectionResults, users are taunting the MLA's horse-trading through this photo. People are retweeting it a lot.

NDA is behind trends, Nitish is crying

In the initial trends, the atmosphere of Meem has heated up on social media seeing the Grand Alliance getting majority. There is so much enthusiasm among the people that since the postal ballot, the legs of the opposing parties have started pulling. A user has shared a photo of Nitish, in which he is seen crying. People are also retweeting it on Twitter.

Devendra Fadnavis became CM of Bihar in Mim
People still remember the bash of the BJP in Maharashtra overnight. In the initial trends of Bihar, people are sharing memes by looking back at the NDA. In this, supporters of the grand alliance are sharing the photo of former Maharashtra Chief Minister Devendra Fadnavis, writing that he is taking the oath of the post of CM of Bihar.