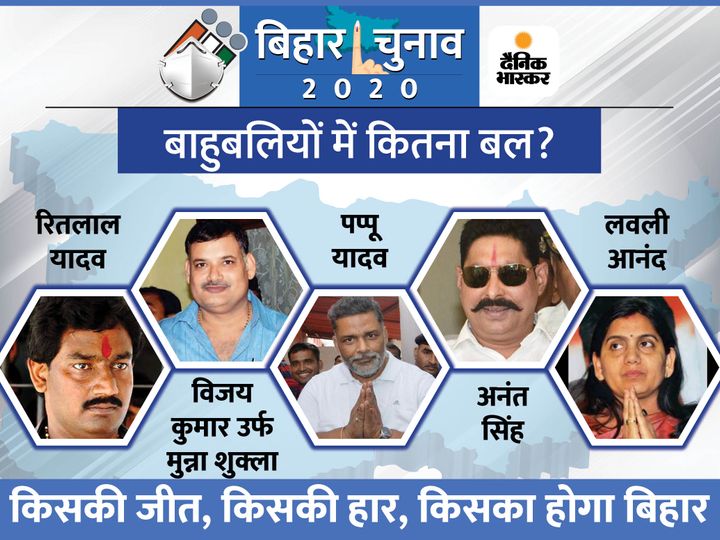 Voting for Bihar election continues. Trends are slowly starting to change into results. No one wins or loses the party or coalition, but there are some leaders about whom everyone wants to know. Especially about the Bahubalis of Bihar. Bahubali and his family are also in the fray in this election. Anant Singh with the highest number of 38 cases has come close to winning, while Pappu Yadav with 32 criminal cases seems to be coming at number three. Let us know the latest trends of such Bahubalis and their family members …

1. Anant Singh, RJD, Mokama
Mokama seat has been occupied by Bahubalis for the last three decades. Of this, Anant Singh and his family have been in possession for 25 years. Anant Singh is the Bahubali leader of Bihar. He has the highest number of 38 criminal cases registered. These include cases like murder, attempt to murder, kidnapping. Anant Singh won the February 2005 election from here for the first time. He has been winning continuously since then. This time too, they are leading. In 2015, he left JDU and won an independent election from here. He was still in jail at that time. This time too he is in jail. Anant Singh is the one who gave the Chief Minister Nitish Kumar a silver coin at an election rally. They have kept pythons and elephant-horses at their home.

2. Vijay Kumar alias Munna Shukla, Independent, Lalganj
Bahubali Vijay Kumar alias Munna Shukla is contesting as an Independent from Lalganj seat. He won for the first time from here in jail in the 2000 assembly elections. It then won LJP in February 2005 and JDU in October 2005. Munna Shukla is such a big Bahubali, her name has come in the murder of DM and Minister. He was also sentenced to life imprisonment in both these cases, but was later acquitted by the High Court. When Munna Shukla was serving a sentence in jail, he used to call the dancer in the jail itself. Munna Shukla fought JDU in 2015, but lost. There are chances of losing this time too, as they are currently at number three.

3. Ritlal Yadav, RJD, Danapur
Ritlal Yadav used to do railway contract work. Later came into politics. It is said about him that all the railway tenders that came out of Danapur Division used to go to Ritlal. People say that whoever tried to go against him was killed. Ritlal Yadav is contesting from Danapur seat on RJD ticket. Against him is Asha Devi of BJP, who has been winning from here for 4 consecutive times. This Asha Devi is the one who was accused of killing her husband Satyanarayan Sinha. Ritlal lost from here in 2010. But, this time it is leading.

4. Sunil Pandey, Independent, Tarari
Sunil Pandey has been a 4-time MLA. Samata has been associated with Nitish Kumar since the time of the party. In 2015, he left JDU and joined LJP. Wife Geeta Devi got the ticket, but lost by just 272 votes. This time LJP did not field its candidate due to Tarari seat going to BJP, so Sunil Pandey went to independents. Sunil Pandey is the one who gave a supari of Rs 50 lakh to kill Bahubali Mukhtar Ansari of Uttar Pradesh. Sunil Pandey is still ahead.

5. Pappu Yadav, Jaap, Madhepura
Rajesh Ranjan alias Pappu Yadav has been a MLA once and 5 times MP. He was earlier in the RJD, but in 2015 he formed his own party called Jan Adhikar. Pappu also contested Lok Sabha elections from Madhepura in 2019, but lost. This time Madhepura is fighting from the seat. Pappu Yadav was awarded life imprisonment in the murder of CPI (M) leader and Purnia MLA Ajit Sarkar, but was later acquitted by the High Court. Pappu Yadav's wife Ranjit Ranjan has also been a two-time MP. Pappu Yadav is currently running at number three.

7. Vibha Devi, RJD, Nawada
Vibha Devi is a RJD candidate from Nawada. She is the wife of Bahubali MLA Rajaballabh Yadav. Rajaballabh was once considered close to Lalu Yadav. Rajaballabh is currently serving a life sentence in a rape case from a minor. He is probably the first MLA who has been sentenced to life imprisonment while in office. Rajaballabh has been a three-time MLA from Nawada. This time his wife is fighting from here. She is still moving forward.