Cabinet has 4 ministers, the claimant 7 more; Started | 4 Ministers in cabinet, candidates more than 7 and started claiming 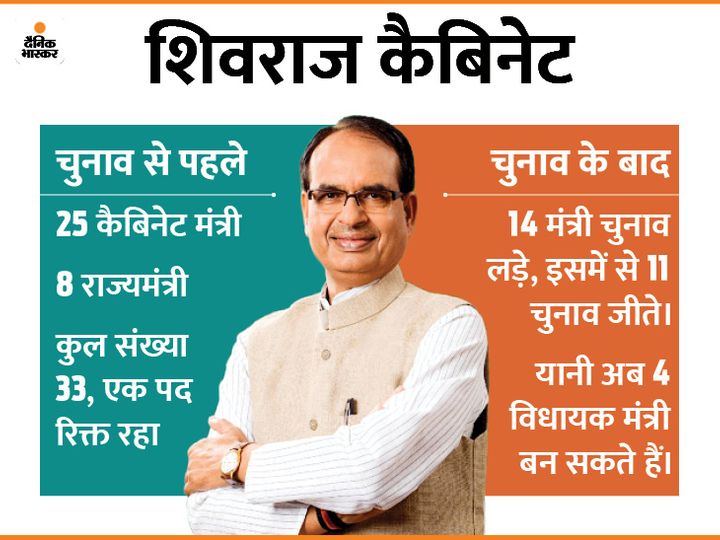 Cabinet expansion will remain the election for Shivraj.

Winning 19 seats in the 28-seat by-election in Madhya Pradesh has increased the stature of the BJP government, but the challenges before Chief Minister Shivraj Singh Chauhan are also not less. The first challenge will be the expansion of the cabinet. After losing 3 (two Scindia supporters) ministers from Congress to BJP, four more ministers can now be included in the cabinet. One place was already vacant, but more than 7 MLAs are claiming for these 4 places. Shivraj will have to work hard to convince even one.

Shivraj included 14 of the 22 MLAs who had resigned from the Congress in his cabinet. It did not have equations like region-wise representation, but now this pressure will remain. Now Vindhya and Mahakaushal MLAs are expected to get ministerial posts. The question is also who will become the Speaker of the Assembly after the cabinet expansion. Will the Scindia supporters who lost the election get a place in the BJP organization or not? Appointments in corporates are also a challenge for Shivraj.

If the Congress had joined hands with the BSP in MP, …

Vindhya region MLAs will be under more pressure on Shivraj. Senior MLA from here Girish Gautam has already filed a claim to join the cabinet. He said that Vindhya should get attention in the cabinet. Hopefully, the party will consider it.

What did Digvijay advise Nitish … Read

Shukla, Sharma or Sisodia for the Speaker of the Legislative Assembly

Kedar Shukla, an MLA and Vindhya elder leader, can claim the post of Assembly Speaker for 6 times. Girish Gautam is also not far behind in the race. Apart from these, the names of Yashpal Sisodia from Nimar and former Assembly Speaker Sitasharan Sharma from Narmadapuram can also be considered.

Many senior legislators have become active to get a place in the cabinet. Apart from Sanjay Pathak, Rampal Singh, Gaurishankar Bisen and Rajendra Shukla, who were ministers in the previous tenure of the Shivraj government, Nagendra Singh, Ramesh Mendola, Ajay Vishnoi are in the race.

What are the 10 reasons for Congress's defeat in Madhya Pradesh …

Scindia's interference in government will increase

Jyotiraditya Scindia's influence in the party may increase with the BJP getting 19 seats in the by-election. He will be heard in the organization as well as in the government. Actually, Shivraj did not face such political situation in his last three terms in the government.

BJP state president VD Sharma has gained strength after a spectacular victory in the by-election, but the biggest challenge before him is to align with Scindia supporters and give dissidents a place in the executive. The reshuffle in the state executive has been stalled since February. It is believed that an executive committee will be formed before the likely body elections in December-January.