In the last 22 years, she fought alone with RJD 8 times, but every time after the election she became with him. | Fighted 8 times in Bihar in 22 years, 4 times separately, but always together after elections 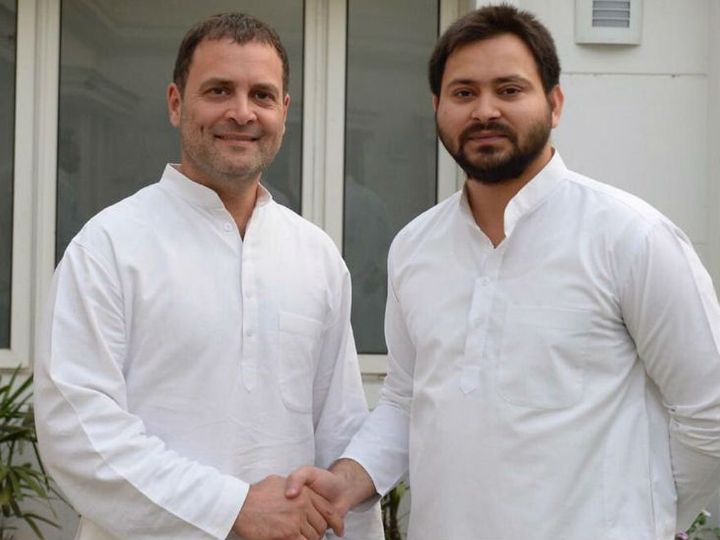 The RJD has got 75 seats in the 2020 assembly elections, while the Congress has got only 19 seats.

A new government has been formed in Bihar. Nitish Kumar has become the Chief Minister for the fourth consecutive time. Here, differences between the Congress and the RJD are beginning to emerge in the Grand Alliance. RJD leader Shivanand Tiwari has questioned the top leadership of the Congress. He has said that Congress has been a hindrance for the alliance. Rahul Gandhi was having a picnic at the time of elections. The Congress contested 70 seats, but did not hold 70 rallies. Tiwari said whether any party is run like this? PM Narendra Modi is older than Rahul Gandhi, but he did more rallies than Rahul. Why did Rahul only do 3 rallies?

Actually, RJD was preparing for the coronation of Tejashwi in this election. Except Bhaskar, all exit polls were also in his favor, but when the result was declared, the Grand Alliance remained a few steps away from the majority. And now the Congress is being blamed for this. Whether this will affect the alliance further or not, time will tell, but this game of alliance between Congress and RJD in Bihar is not new. Ever since the RJD's entry, there has been a period of separation between the two.

We have to go back 31 years to understand the alliance of the two. Riot occurred in Bhagalpur in late 1989. Hundreds of lives were lost. Then there was the Congress government in the state. Lalu Yadav played the Muslim card and blamed the Congress for the riots. This was followed by the assembly elections in 1990. Congress lost this election. The Janata Party, which was newly formed, got a majority and Lalu Yadav became the Chief Minister. Soon after becoming CM, Lalu implemented the recommendations of the Mandal Commission. In this way, a new equation MY (Muslim and Yadav) entered the politics of Bihar and from here began the phase of the fall of Congress in Bihar. 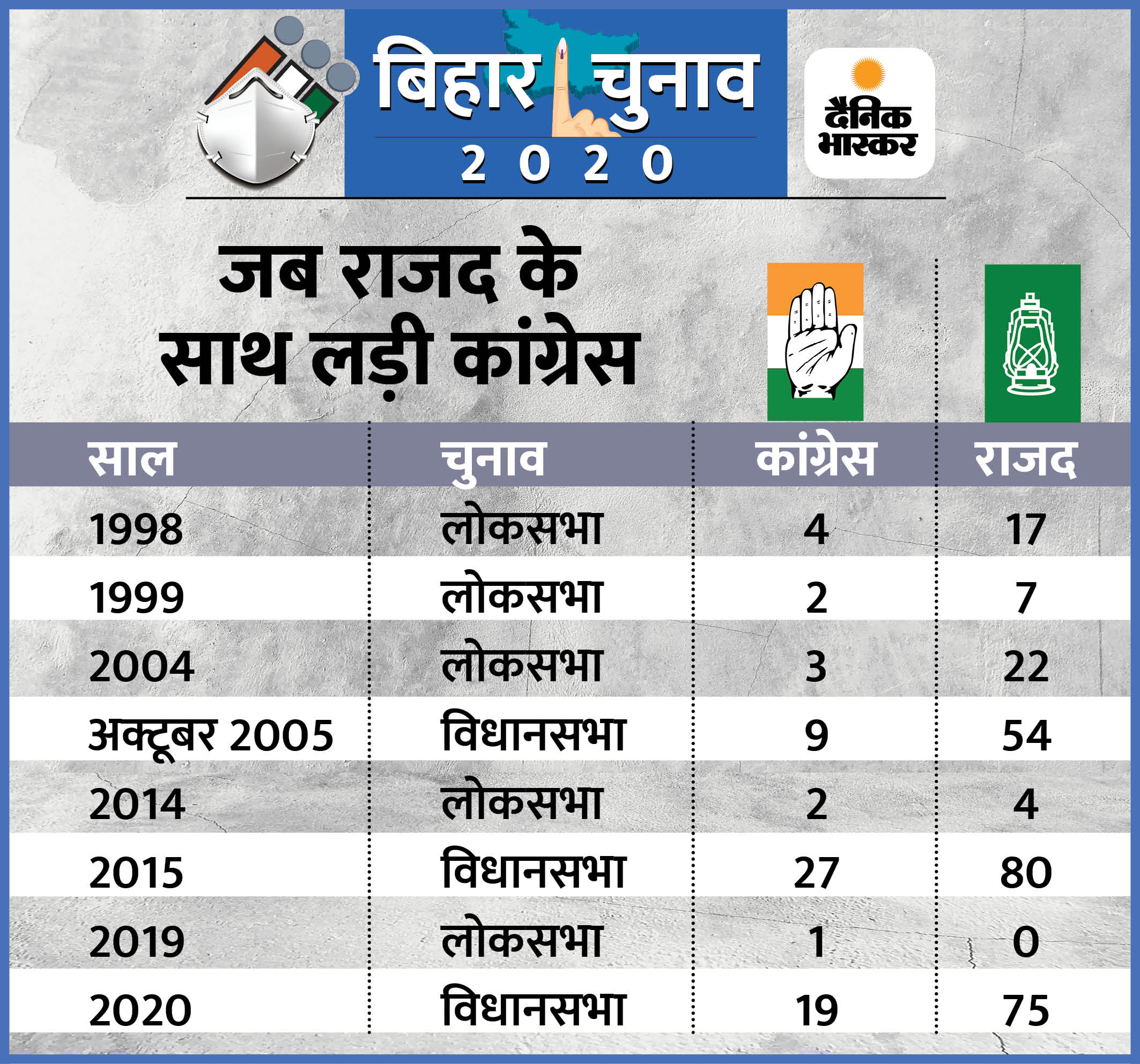 The Congress became so weak that it now needed support to do politics in Bihar. The performance of the Congress in the 1995 assembly elections deteriorated further. It got just 29 seats out of 324 seats. However, Lalu again became CM from the Janata Party winning 167 seats. After this, Lalu Yadav got caught in the fodder scam. The Janata Dal split from them and the Rashtriya Janata Dal (RJD) was born in Bihar. This was followed by the Lok Sabha elections in 1998. The Congress was weakened in Bihar, joined hands with Lalu to strengthen it. The Congress and the RJD fought the 1998 Lok Sabha elections together. This was the first alliance of the two.

Of the 54 seats, Lalu left only 8 seats for the Congress. The Congress won four. In the 1999 Lok Sabha elections, Congress contested 13 seats, out of which 8 were under friendly agreement with the RJD and 5 fought in a friendly but won only 2. The Congress felt that its alliance with the RJD was not a profitable deal, so the Congress decided to contest the Assembly elections next year ie 2000. The Congress said that Lalu Yadav is corrupt, he is accused of scam. The same Lalu Yadav with whom Congress contested the 1998 and 1999 Lok Sabha elections despite being accused of fodder scam. Congress got 23 seats in this election. On the other hand, Lalu's party also stayed away from the majority. Manipulative politics started, Nitish Kumar became the CM for seven days, but the Congress supported the RJD and Rabri Devi became the CM of Bihar.

The Congress contested the 2004 Lok Sabha elections with the RJD. This time another new partner entered the alliance as Ram Vilas Paswan. Congress got 4 seats in this election. The Congress government was formed at the center and Lalu-Ram Vilas became the minister. This was followed by the assembly elections in February 2005. The Congress again parted from the RJD and contested with the LJP. This time no party got a majority. The key to power remained with Ram Vilas, but the lock did not open and thus imposing President's rule. 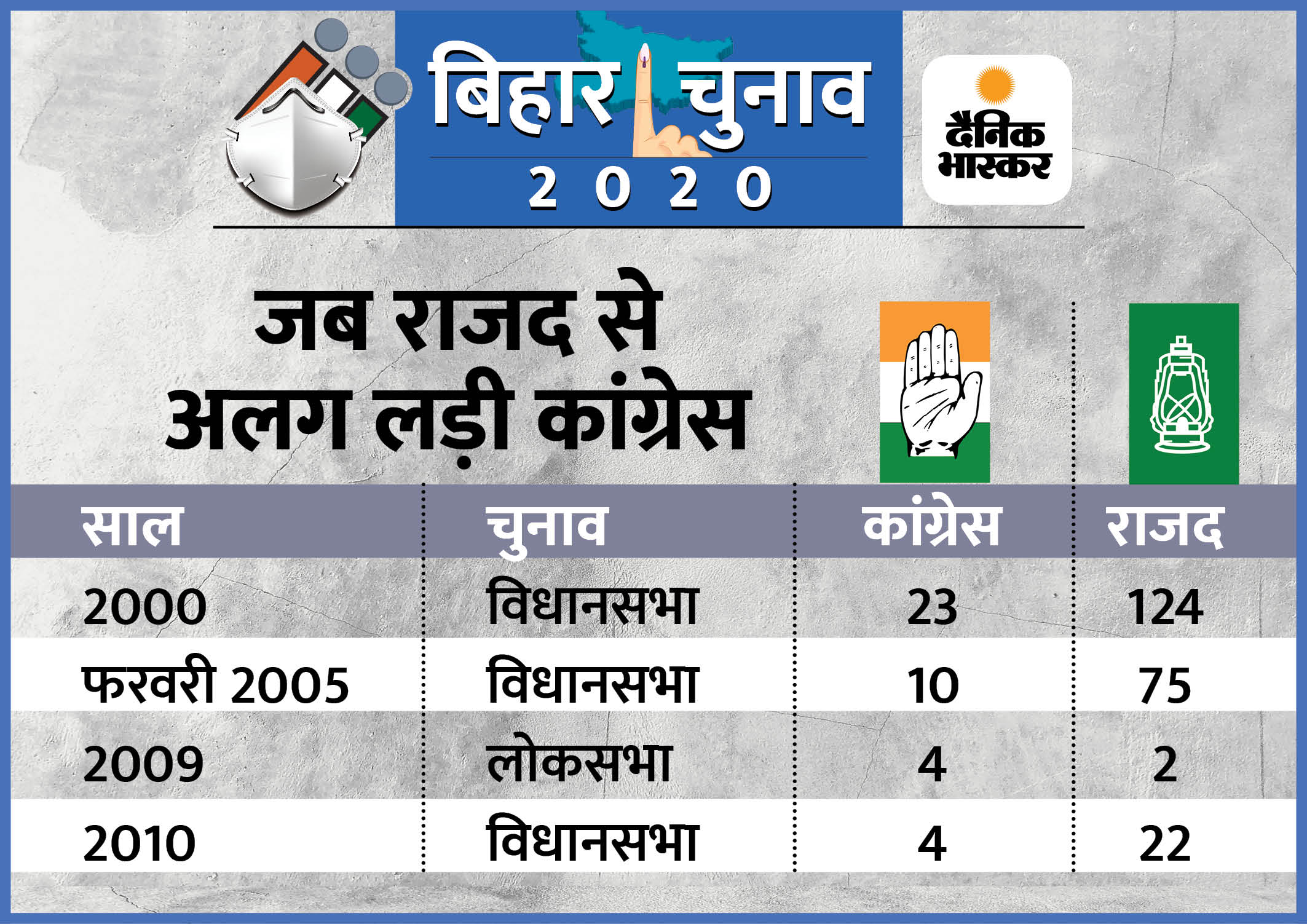 There was a re-election in Bihar in October 2005. This time the RJD and Congress were reunited. The Congress won 9 seats in this election and the coalition lost a majority. NDA government was formed in the state and Nitish Kumar was the new CM. This was followed by three elections to the Lok Sabha and three to the Assembly. The RJD and LJP gave Congress only 4 seats in the 2009 Lok Sabha elections. The Congress refused to take it and contested on its own. However, it did not benefit him and could win only two seats.

Assembly elections were held the following year in 2010. Congress again entered the fray alone. This time it got only 4 seats, the lowest. The Congress is now beginning to realize that without RJD its pulses are not going to melt in Bihar. In the 2014 Lok Sabha, she again joined the RJD. This time there was a Modi wave. Hence, the performance of both Congress and RJD was very poor. Congress contested 12 seats. It won two seats, while RJD, which contested 27 seats, won four seats.

In 2015, Congress and RJD fought together again. This time he got a new partner in the form of Nitish Kumar. For the Congress, this election acted as a tonic. The party which was ending in Bihar got some life. In this election, Congress contested 41 seats and won 27 seats. The Congress had the best performance since 1995 in terms of number of seats and strike rate. After this, RJD and Congress also fought in the 2019 Lok Sabha elections. Where the Congress has not even opened one seat to the RJD account.