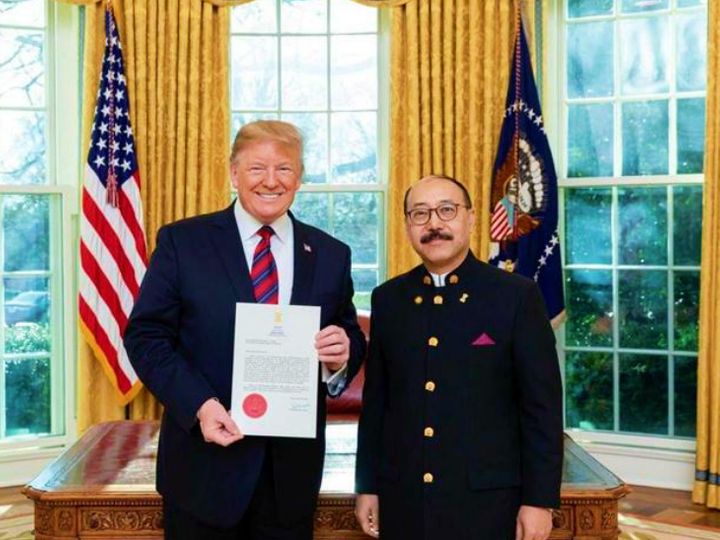 The photo is from 11 January 2019. Then Harshvardhan Shringla met US President Donald Trump as an Indian ambassador. Shringla is now Foreign Secretary. Later this month, he will visit Nepal.

Relations between India and Nepal are beginning to normalize again. Last month, RAW Chief Samant Kumar Goyal went to Nepal. After this month, Army Chief General MM Narwane visited Kathmandu. It is now reported that Foreign Secretary Harsh Vardhan Shringla will visit Nepal. Shringla can visit Nepal later this month. This visit can be announced today. However, the agenda may not be informed.

Third important tour in 20 days
On 23 October, RAW Chief Samant Kumar Goyal went to Kathmandu. His visit was questioned by a section of Nepali media. It was said that why India sent an intelligence agency chief instead of a diplomat. It was also said that there can be a change of power in Nepal. However, the Foreign Ministry of India or Nepal called it an informal meeting. After this, Army Chief General of India Narwane went to Nepal. Both Goyal and Narwane also met Nepal Army Chief General Thapa and Prime Minister KP Sharma Oli. Now the biggest officer of the Indian Foreign Ministry, that is the Foreign Secretary, is going to Kathmandu.

Border dispute and diplomacy
The dispute between India and Nepal began last year over Lipulekh, Limpiyadhura and Kalapani. India made the modern highway here, describing this part as its own. Nepal described it as its territory. There was a lot of rhetoric from Nepal. India did not respond. Later General Narwane said – Nepal is acting on the direction of someone else (pointing towards China). There was a sharp reaction to Narwane's statement in Nepal.

Diplomatic route now
The rhetoric from Nepal came to an abrupt halt. Prime Minister Oli called and congratulated Narendra Modi on his birthday. After this the tension in the relationship started to decrease. RAW and Army Chief went to Nepal. Now the Foreign Secretary is going. However, both countries have not said anything on the agenda of the visit so far. But, Nepali media reports say that the boundary dispute is scheduled to be discussed during Shringla's visit and that is the purpose of his visit as well.

Sania Mirza is going to debut on digital platform, will be seen in this fiction series