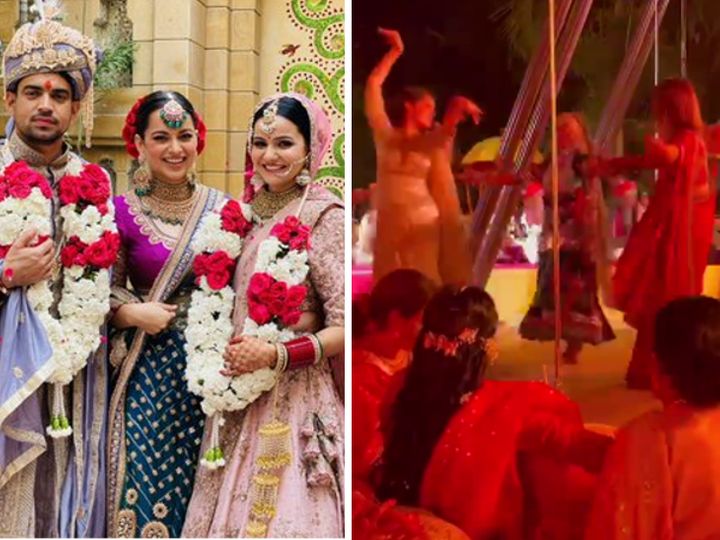 Kangana Ranot's brother Akshat is married to Ritu Sangwan. The actress has shared the photo of this wedding held at the Leela Palace in Udaipur on her social media account. He wrote in the caption, “Dear friends, bless my brother Akshat and daughter-in-law Ritu.” The theme of the wedding was Rajwada.

Kangana is fierce in Mehndi

Kangana Ranot had earlier posted a video on social media, in which she and her sister Rangoli are seen dancing heavily on Rajasthani folklore 'Kesariya Balam Awoji Padho Mhare Desh'. While Kangana in the caption of the video has described the event as a big day for her family, on the other hand, she has welcomed journalist Arnab Goswami released on bail.

The actress wrote in the caption of the video, “Yes, it is a big day for our family. But it is just revealed that Arnab is back. So here we go. Welcome back dear friend . “

The actress also shared some photos of Mehndi Ceremony, in one of which Akshat was seen showing mehndi in her hands. Kangana wrote in the caption, “A small galaxy formed by me in the hands of my Bholu (who calls Kangana Akshat fondly).”

All reached Udaipur on 10 November

The Ranot and Sangwan family reached Udaipur on 10 November for the wedding, where after dinner everyone enjoyed boating around the palace. On 11 November, Akshat and Ritu's ceremony of turmeric, mehndi and music was completed.