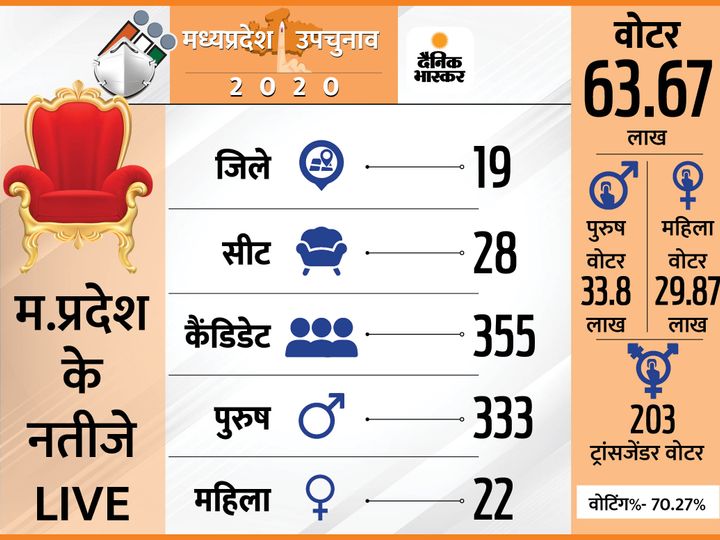 Which way the camel will sit in the politics of Madhya Pradesh, it will be decided by this afternoon. Voting for the by-elections in the 28 assembly seats of the state, vacated by the resignation of Congress MLAs and the demise of two legislators after Jyotiraditya Scindia's rebellion from the Kamal Nath government, will begin at 8 am at 19 district headquarters. All preparations for counting of votes have been completed. The votes will be counted with complete security following the directives of the Election Commission and the guidelines of Kovid-19. Voting was held on November 3 on these seats. This result is a question of prestige for Shivraj and Kamal Nath along with Scindia.

The earliest result is expected to come from Anuppur district. There will be counting in 18 rounds. The results of the most late Gwalior will come. There will be 32 round counting here. Deputy Chief Electoral Officer Pramod Shukla said that this time there will be 14-14 tables in each round to maintain social distancing keeping in mind the guidelines of Kovid-19. The votes will be counted in two halls of 14 tables in one hall in Rajgarh, 6 in one of the 3 halls in Guna, 4-4 tables in 2 halls and 7-7 tables in the remaining 17 districts. The counting of two tables from each round of each hall will be done by the observer of the Commission of Inquiry.

Counting of machines whose control unit is not showing in the counting of votes will be kept aside by the Returning Officer and counting of other machines will continue. If the win-loss difference of the candidates is more than the control unit's votes not displayed, then the result will be declared by not taking it in the counting. Similarly, if the difference is less or equal then the votes will be calculated as per rules from VVPAT.

Sanitizer will be arranged at the counting center by the district administration and the guidelines of Kovid-19 will be followed. A strong room will be opened in the presence of candidates before counting. There will be continuous CCTV coverage of the corridor and counting hall while opening strong rooms, removing machines. After the counting of votes, essentially computation of VVPAT will be done by counting the randomly selected 5-5 VVPAT slips.