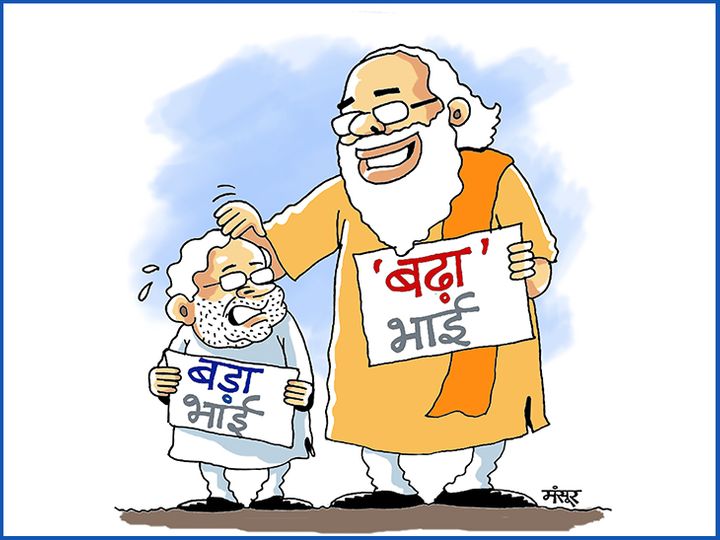 The results of Bihar elections are coming and going. NDA is looking to form government for the third time. But this time Nitish Kumar's stature is getting weaker. The BJP seems to get more seats in the state than 2015. As of now, the BJP can hold between 70 and 80 seats. In 2015, it won 53 seats. JDU is losing about 20 to 25 seats. It can get 45 to 50 seats.

It was a matter of the electoral results of two brothers and elders of the NDA. With the current results, a lot is going to change in Bihar and NDA. Both the role and status of BJP and JDU will change in Bihar. JDU used to play the elder brother of BJP in Bihar till now. It has also been seen in seat sharing. Nitish has been saying that we will do politics in Bihar, BJP should do politics at the center.

The change in the role of elder and younger brother has taken place not in a year or two, but in 20 years. In some elections, BJP also got more seats than JDU. Despite this, JDU and Nitish considered BJP as the younger brother.

Story of NDA in Bihar: 4 times in 20 years, Nitish became the Chief Minister with the support of BJP, but considered BJP as the younger brother

2000: Nitish Kumar became the Chief Minister of the state for the first time with the support of the BJP, but could remain in the post for only 7 days.

2005: The elections were held again in the state after six months. The NDA got 143 seats. JDU won 88 and BJP 55 MLAs. Nitish became the Chief Minister.

2010: The NDA won a whopping 206 seats out of 243 seats. This time JDU got 115 seats and BJP 91 seats. Nitish's status and stature both increased. It was from here that JDU started calling itself the elder brother of BJP. The effect of this was that just before the 2014 general election, JDU split from the NDA because of Modi.

2015: JDU and BJP contested elections separately. In this, JDU-RJD-Congress Mahagathbandhan got 126 seats. It had 71 seats of JDU and 80 seats of RJD. BJP had got 53 seats. But the Grand Alliance broke in just three years.

2020: This time 50-50 formula applied between BJP and JDU in assembly elections. Despite this, JDU fought for 122 seats and BJP in 121 seats. His younger colleagues were also involved in this. Earlier, in every election, JDU used to contest more seats on its own, claiming to be the elder brother of BJP.

BJP's average winning seat in 2010 was better than JDU

The JDU and the BJP alliance contested the 2009 Lok Sabha elections together. Nitish's party contested 25 seats, winning 20 and the BJP managed to win 12 seats on 15.

From budget to premium, attractive discounts on all range of smartphones

From budget to premium, attractive discounts on all range of smartphones