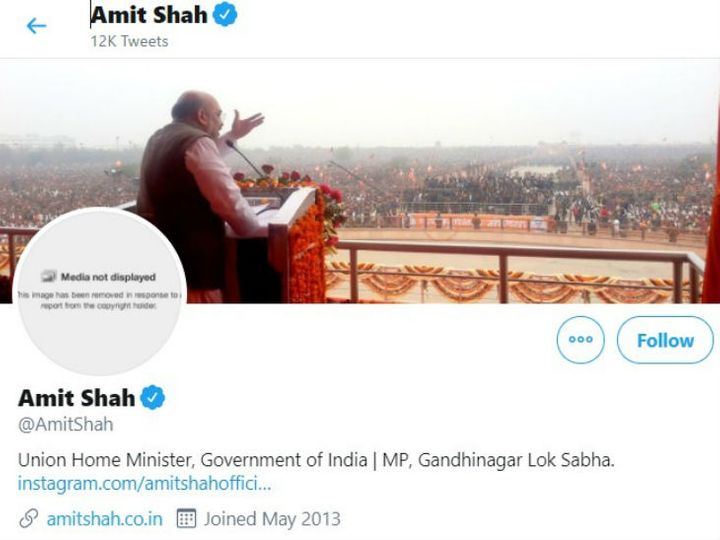 On Thursday, the photo of Home Minister Amit Shah had stopped showing his photo. The reason for this was cited as a copyright issue.

The profile photo on the Twitter account of Home Minister Amit Shah suddenly stopped showing on Thursday morning. Instead, the message appears that the photo has been removed due to a copyright issue. On Friday, it was clarified by Twitter. A company spokesperson said Shah's account was locked due to an inadvertent mistake. This decision was withdrawn shortly.

Twitter restores profile photo of Union Home Minister Amit Shah's account, earlier it had removed the photo over claims in “response to a report from a copyright holder”. pic.twitter.com/uhW3kNtpgn

On clicking on Shah's picture, the message of media not displayed appeared. It said that this photo has been removed on reporting from the copyright holder. Amit Shah has over 23 lakh followers on Twitter. A Twitter spokesperson said that due to the global copyright policy, we temporarily locked the account. It has now been unlocked. The account has started working again.

There is a tussle between Twitter and the central government over showing the wrong map of the country. The government has issued a notice to Twitter on the declaration of Leh of Union Territory Ladakh as part of Jammu and Kashmir. According to IT ministry sources, Twitter has been given 5 days to respond. Failure to respond will result in legal action against the company and its officers.

Vijay Raaz broke his silence on Molestation Row- My livelihood affected then Am I not victim | Vijay Raj broke the silence – 23-year career is at stake, if livelihood was affected, am I not a Victim?